The next jumping on prog is almost here, get the full lowdown on the thrills inside now! 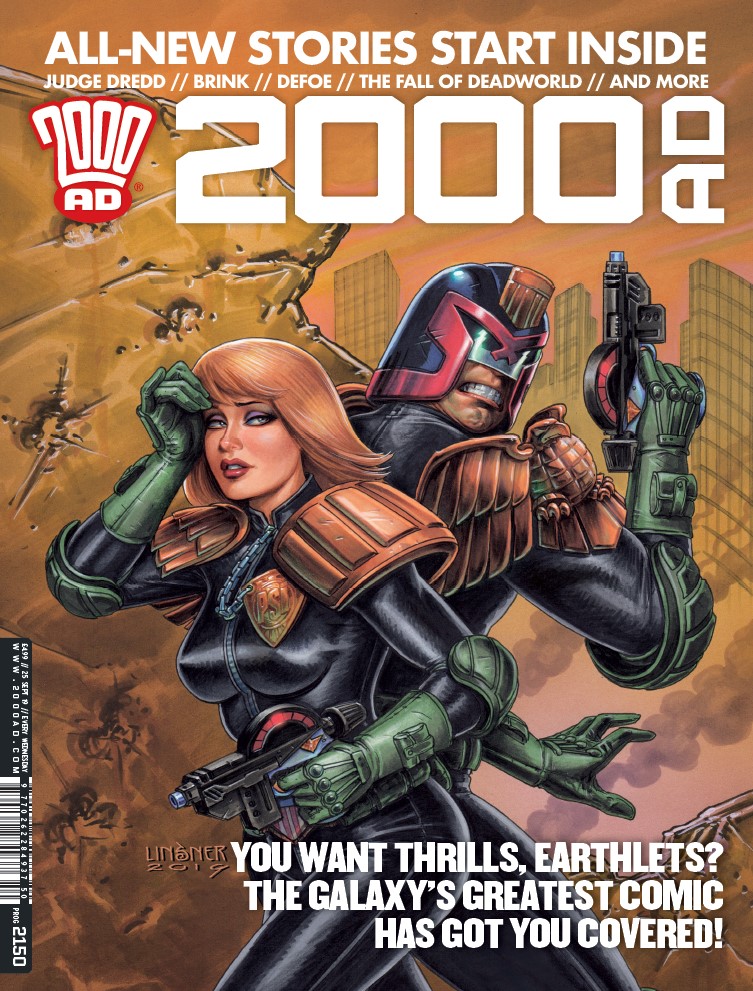 Our next jumping-on prog – Prog 2150 – is almost here, and if you’re not already one of our loyal subscribers, now might just be the best time ever to subscribe to the Galaxy’s Greatest Comic!

Prog 2150 is fit-to-burst, with EIGHT thrilling sci-fi stories from some of the best writers and artists in the comics industry today, including John Wagner, Pat Mills, Guy Adams and so many more! There’s brand new crime-fighting action from JUDGE DREDD, violent sect crimes in BRINK, zombie-vanquishing in DEFOE and a whole bunch of zarjaz stories to sink your teeth in to.

The action doesn’t stop there though! Subscribe to 2000 AD and you’ll receive these sensational stories direct to your door or eReader EVERY WEEK, and with prices starting at just £7.99 human money each month all we can say is – what are you waiting for!?

Still not sold? Check out the full line-up below and feast your eyes upon some preview pages, Earthlets. We guarantee you won’t be disappointed!

Mega-City One, 2141 AD. Home to over 130 million citizens, this urban hell is situated along the east coast of post-apocalyptic North America, Crime is rampant, and only the Judges — empowered to dispense instant justice — can stop total anarchy. Toughest of them all is JUDGE DREDD — he is the Law! Now, former Chief Judge Hershey has revealed that she’s dying from a pathogen, and is facing her final days…

An alternate 1940s USA. WWII is over, victory having been secured by occult means. Now, magic is a part of everyday life, its practitioners commonplace. Mallory HOPE is one such skilled operative, though calling on the dark arts takes its toll on the user. He’s also a private investigator, hired for all manner of down n’ dirty jobs, and now his services have taken him to New York at the behest of an old army colleague…

The late 21st century, and through environmental catastrophe and industrial overload Earth has been reduced to a wasteland. Mankind finally evacuated the planet in 2072 and millions were housed in a number of deep-space Habitats. But life on these cramped, overcrowded stations is tense, with many spilling over into madness — as HSD cop Bridget Kurtis has discovered in her investigations into violent sect crimes…

Out in the vast reaches of the universe, there are an infinite number of stories waiting to be told. These cautionary tales pass from traveller to traveller in the spaceports and around campfires on distant planets, acquiring the status of legend, their shocking ends a salutory lesson in hubris. Anything is possible in these twisted trips into the galaxy’s dark side, so abandon your preconceptions, and expect the unexpected…

Mega-City One, 2141 AD. Psi-Division is a section of Justice Department that specialises in Judges with accentuated psychic talents — from precognition to exorcism, astral projection to pyrokinesis, its operatives deal with all manner of paranormal crimes. Cassandra ANDERSON is Psi-Div’s top telepath, who’s been responsible for saving the city on numerous occasions — not least against the undead superfiend Judge Death…

London, 1668. It is two years since the city was devastated by the Great Fire. From the ashes rose the undead, hungry for the flesh of the living. Protecting the populace are zombie hunters like Titus DEFOE, a former Leveller, who now makes it his mission to rid the capital of the ghouls. In this strange, clockpunk alternate past, supernatural entities have been passing info to humanity, enabling them to build rocketships…

Downlode gun-sharks Finnigan SINISTER and Ramone DEXTER are the best triggers money can buy. Having whacked Holy Moses Tanenbaum, a ganglord from an alternate dimension whose presence threatened the fabric of reality, they’ve found killing him reset the continuum, meaning no one knows who they are, apart from hacker Billi Octavo. Now, after a bodyguarding gig went south, Dexter has been badly injured…

THE FALL OF DEADWORLD // DOOMED

The planet that eventually became known as DEADWORLD was once a regular civilisation existing in a dimension parallel to our own. But the end of days is coming, and creatures known as the Dark Judges are spreading their contagion, exterminating all life. While the survivors attempt to resist the undead horde, the neighbouring Soviets have seen the chaos as an ideal time to launch an attack on their enemies…