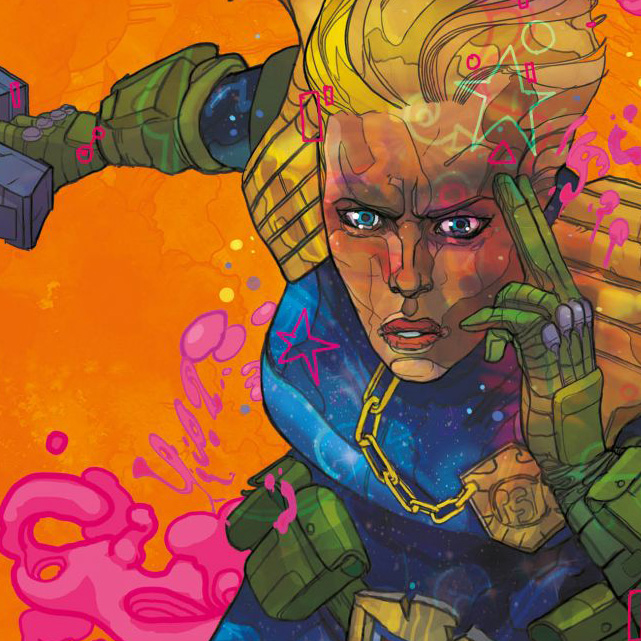 Read the first chapter and grab a limited edition print copy of the new Judge Anderson novella by Laurel Sills!

Judge Anderson: Devourer is the latest fiction novella from 2000 AD and Rebellion Publishing – and there only 200 copies of this special edition paperback for sale, each one signed by the author!

In 2101 AD it’s Psi-Judge Cassandra Anderson’s second year on the streets as a full-Eagle Judge, and something’s taking down Psi-Judges. More and more are turning up in the infirmary with only one phrase in their minds: I am not worthy.

Pulled off a hunt for a missing child, Anderson finds herself partnered with seasoned Judge Mei Yin on the trail of the cult behind the madness.

But Mei Yin doesn’t do partners.  And she’s more closely connected with the case than she’s willing to admit to…

Judge Anderson: Devourer will be available for Amazon Kindle, Kobo and other e-readers on 14th March.

Read the first chapter below…

Psi-Judge Turner froze, his pulse thudding loudly in his ears, his eyes scanning the deserted street. He held his breath as he waited to hear the child’s voice again, straining his psi-sense for that tiny, panicked, chirping call.

This was a Shine district, towering blocks of GlamCo living where the 0.01 percent of the Mega-City One population lived out their lives in shimmering force-field-protected security. Turner craned his head to gaze up at the tiny sparks caused by floating debris hitting the shields. He had a fleeting moment wondering what it would be like to breathe that filtered air before he shook himself and focused.

He closed his eyes and opened his thoughts to the night. The roar of consciousness threatened to overwhelm him, the teeming, collective mass of tumultuous thoughts from the concentration of humanity above whirling him into a state of vertigo. He had to try and sift through it if he wanted to pick up the kidnapper’s trail, but he’d never been good at wide-scale processing.

A scream stabbed into him, savaging his open mind. Stupid. He slammed up his barriers, braced himself and zeroed in on the echoes of terror.

A hand pressed over his mouth, rope biting into his wrists, pain as his small body is dropped onto the ground, gravel crunching as it bites into his back, a bag pulled off his head to reveal a leafy manicured garden, the shimmering wall of the tower in the background.

A wide ramp traversed the side of the tower, narrowing as it wove through a holo-leaf-lined arch towards the pleasure garden, ending in a tall reinforced metal gate, sparkling with the filter-field. His helmet projected a Justice Department code and the door swung open on soundless auto-hinges.

Pulling out his Lawgiver, he stepped in, senses reaching to identify the child and her abductors. He paused as he emerged into the garden of his vision, white gravel paths snaking into lines of ornamental hedges and lush flowerbeds. A feeling of quiet awe washed over him as he realised that most of the plants were real, only bulked out in places by swatches of holo-plants.

A crunch of gravel sounded from the depths of the garden, with no thoughts to accompany it. He frowned, concentrating as he trained his Lawgiver on the sound.

“Identify yourself,” he barked, his footsteps sounding unnaturally loud as he moved towards a bend in the path. “That’s a Judicial order; the sentence for disobeying is three weeks in the cubes.”

An immaculately suited man was seated on a stone bench in a clearing, the high hedgerow encircling him like a cage. He sat with his hands clasped loosely on his lap, a calm silence emanating from him, lapping at Turner with a bullying insistence.

Turner shook himself. How did this man know his name?

“Where is the girl?” he demanded, feeling instantly stupid. He could sense it now, an absence of fear, of tension; the distress call he had followed snuffed out like a light. “What have you done to her?”

The man smiled, his teeth perfectly white, his pale blue eyes stark and cold beneath the silver hair swept artfully back from his weathered brow. “I wanted to speak with you, Judge Turner. The call was designed specifically for you. You felt her panic, did you not? You yearned to help her.”

Turner felt sluggish, and realised with rising alarm that he could not read the man.

“You should be mindful of your weaknesses, boy. They can be used against you.” The stranger gestured to the bench beside him. “Sit, please.”

“Weakness?” Turner pushed the word through numb lips. “I am protecting the weak.”

“Noble sentiment, Psi-Judge Turner.” The man sneered as he spoke the syllable, and shook his head. “But it is a falsehood, to think that you are what you are because of your own wishes. You are a tool, Turner. Your gift has been taken and controlled by the Judiciary, twisted and warped to use for their own ends. This gift of mind we have, Turner, do you really think it was meant for such tawdry use as this?”

We have. It made sense now, why he couldn’t read him, and this feeling, this haze that had suddenly come over him. This man had psi abilities, strong ones, blocking Turner from using his own power. Turner fought it, sending out feelers into the psi-fog pouring off him.

“Tawdry use?” Turner murmured, exaggerating the dull edge of his voice. Keep him talking; make him think he had control.

“It is abhorrent.” The older man stood, his shadow looming larger as it fell across Turner. His casual tone belied a raw, barely contained rage. “It is sacrilege.”

The tendrils of mind Turner had been carefully working into the miasma of control were suddenly gripped in an iron vice, and the white-haired psi smiled. Turner fell forward from the bench onto his knees as agony exploded within his skull.

Two figures stepped out from the shadows, dressed in grey robes remnant of the vestments of long-dead religions. They had deep hoods that hid their features, and from the darkness beneath came a flood of psi-power. He could almost see it as it streamed towards the white-haired man, where it refracted like light in a crystal.

“This gift is sacred, Judge,” the white-haired man said, stepping forward, “a gift only to be used in the service of Karlul.”

Turner was paralyzed in the onslaught of psi-energy cascading from the man’s lips.

“And you are not worthy, Turner, not worthy at all.”

The two figures stepped in to hover behind the smiling man.

The Psi-Judge began to tremble as he realised he was too weak to resist them.

Turner opened his mouth, shut it, bit his tongue, hard.

“SAY IT.” Spittle flew with the force of his words.

“I am unworthy,” Turner whispered.

The words echoed, bouncing against the walls of his mind.

“I am unworthy,” he said with more force, looking up at the figures, squinting into the glare of their power.

As he felt himself begin to dissolve. There was only one, uniting force that held the pieces of him together, the threads of him thrumming on the brink of snapping. A certainty, an all encompassing conviction, a whole and final truth, penetrating the whole of his being.