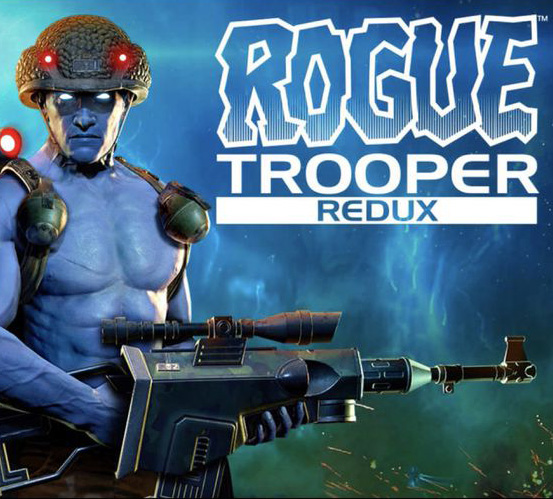 ROGUE TROOPER REDUX sees the return of 2000 AD hero Rogue, the last of the Genetic Infantrymen. Bred only for war and betrayed by his superiors, Rogue seeks nothing but revenge in this pioneering tactical shooter and landmark comic book adaptation.

Originally released in 2006 and earning two BAFTA nominations for Best Character and Best Story, Rogue Trooper is a true cult classic. With its timeless blend of stealth-action gameplay, cover-based combat and epic set pieces, it’s remained a fan favourite a decade on.

“We’ve always been hugely proud of the original Rogue Trooper,” said Rebellion CEO and Co-founder Jason Kingsley OBE. “It’s special to bring it back with the help of our friends at TickTock Games. Remastering it has once again highlighted how influential a game it was for Rebellion. You can see the roots of tactical shooting that evolved over the years into our more recent games, such as Sniper Elite 4 and Battlezone. It’s a really fantastic, exciting shooter and now it looks how we always imagined it.”

Available worldwide now, both at retail and on digital stores! For more information, visit RogueTrooper.com

Formats: Boxed editions also available on PlayStation 4 and Xbox One

*Prices may vary depending on region, format and platform

Founded in 1992, Rebellion is one of Europe’s leading independent game developers and publishers. Whether it’s the breathtaking intensity of Sniper Elite 4, the face-hugging terror of Aliens vs. Predator or the grindhouse frenzy of Zombie Army Trilogy, the Oxford-based studio is known for creating stand-out games that thrill players. www.rebellion.com

2000 AD is the legendary British anthology comic and home of Judge Dredd, as well as a galaxy of original sci-fi, fantasy, and horror action stars. As well as producing innovative and provocative comics for 40 years, it has brought the industry some of its biggest talents, from Alan Moore, Grant Morrison, and Mark Millar, to Jock, Brian Bolland, Dave Gibbons, and many more. Published in print and digital every Wednesday, 2000 AD is the Galaxy’s Greatest Comic and remains at the industry’s cutting edge. www.2000ADonline.com

Founded in 2005, TickTock Games is an independent developer based in West Yorkshire. Boasting a team of highly skilled programmers, artists and producers, most with over fifteen years of experience creating games on all leading platforms, including PC, Console and mobile devices. www.ticktockgames.com