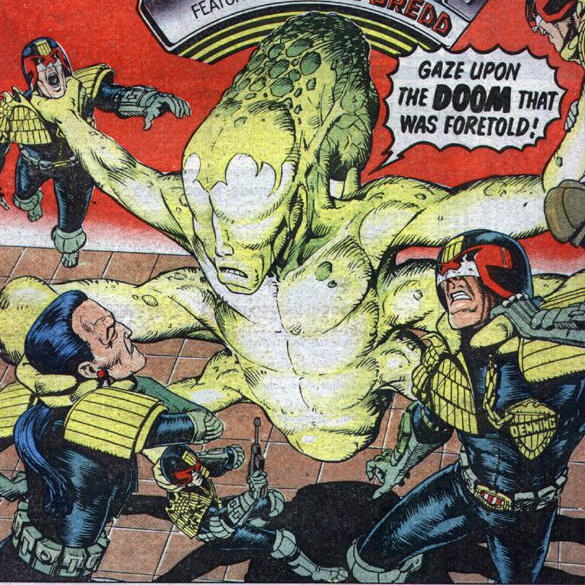 Like so many people, everyone at 2000 AD has been stunned and shocked by the untimely and sudden death of Steve Dillon.

Steve passed away in New York at the weekend and it is no exaggeration to say that tributes have poured in from all over the world – from family, from friends, from fans, from fellow creators. Universally acknowledged as one of the definitive Judge Dredd artists, Steve was well known as a great friend and a wonderful raconteur.

2000 AD will pay tribute to Steve in a future issue but over the last two days it has been great to see so many people sharing heart-warming stories about meeting and knowing him.

One story that many of our readers have asked to hear again has been about how Steve’s pages for 2000 AD Prog 404’s episode of the Judge Dredd story, City of the Damned, went missing – forcing him to completely redo them over a weekend.

It has become a legendary story, which demonstrated just how talented Steve was – not only was he able to redraw the episode in a weekend, but to the eyes of many and even under extreme time pressure he improved upon his original pages.

Almost four years later in Prog 610, in a unique move editorial placed the published pages for comparison alongside the unpublished ones. The episode’s opening double page spread was not affected as it needed to be coloured, so was always delivered two weeks before deadline.

But this begged the question, how and why did the original pages turn up?

The Prog 610 feature suggests they were found in the 2000 AD Command Module, but we have always been curious about how this happened so we spoke to then-editor Steve MacManus. He had theories but advised us to talk to John Higgins, who was a friend of Steve’s. John was kind enough to explain the true story behind the missing artwork:

“Steve and Tom Frame went on a pub crawl starting at The Assembly House in Kentish Town. Tom had finished the lettering and everything, and they had a good night out.

“It must have been on the Thursday and they were going to drop it off on the Friday to go to production, and off to press on the Monday – I don’t know what the schedule was but Steve would always push it to the last minute.

“Anyway, they were enjoying socialising in the Assembly House and got into a cab to get off home, but Steve woke up the next morning to find the folder with all the artwork in – because he’d taken it to the pub – had gone missing. Assuming it had disappeared between the Assembly House and home, he went dashing everywhere: he rang the cab company that took them home, he checked on the bus, he did everything he possibly could but couldn’t find the artwork.

“I think he might have admitted it to Steve MacManus and decided that him and Tom would do it again over the weekend, ready for Monday to go to press. They finished it off, possibly with the help of some of the people he was sharing a house with at that time – which was Steve O’Leary and a couple of other people – but he turned it around in how ever many hours there are between Friday night and Sunday night last thing.

“So he dashed and got the whole thing in on Monday in time to go off to press, then him and Tom thought “****ing hell, we need a beer!”.

“They go into the Assembly House and the first thing the barman says is “Steve! You left your folder here…”.”

“One thing is for sure, you’ll never see the like of this again!” promises Prog 610’s editorial. Now we know this to be heartbreakingly true. We have lost not just a titan of comics, but a dear friend and colleague, whose work inspired and delighted millions of people. And we are all poorer for his passing.