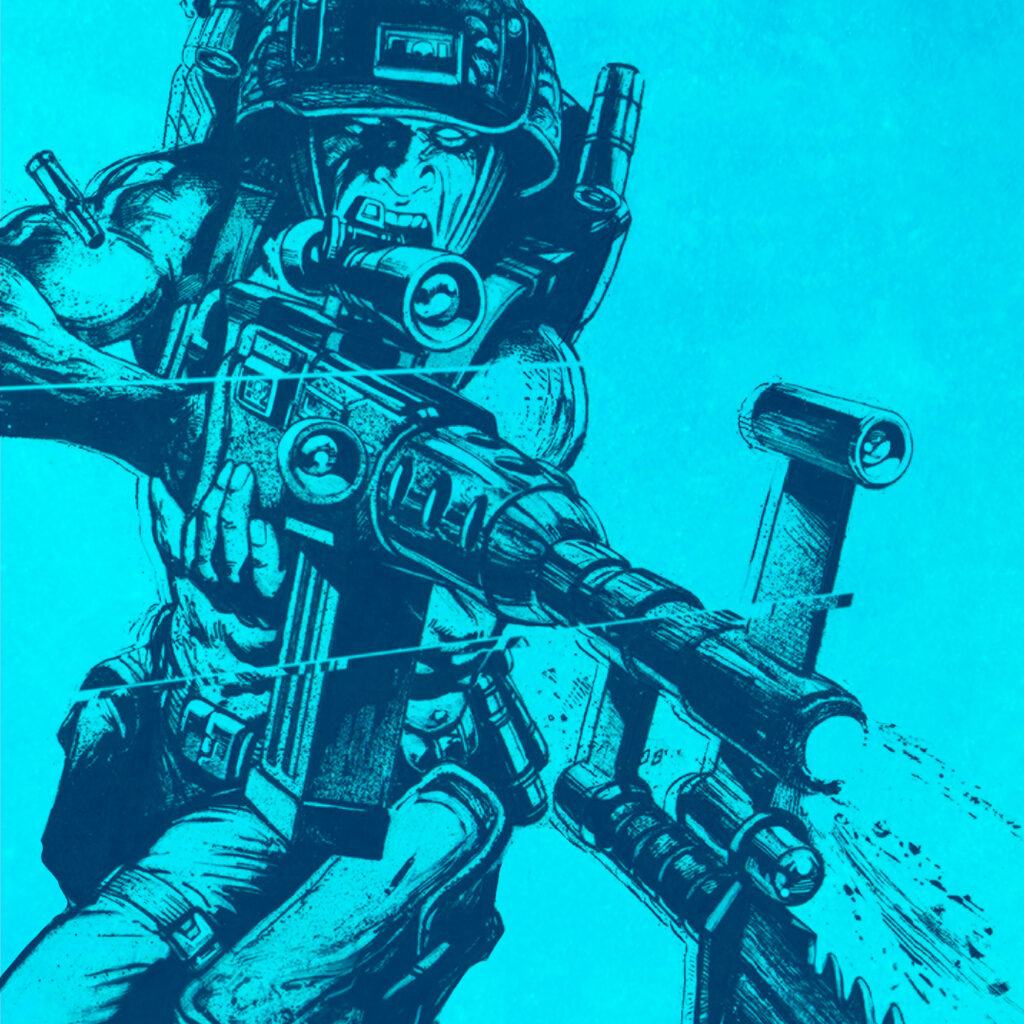 Acclaimed filmmaker Duncan Jones is to bring Rogue Trooper, a character from the legendary award-winning British comic book 2000 AD, to the big screen.

It will see the critically-lauded director of Moon, Source Code, Warcraft and Mute write and direct the as-yet-unnamed picture.

Jones confirmed the new joint venture between Liberty Films and Rebellion, the Oxford-based games publishers and owners of 2000 AD, on his Twitter account today.

“For years now, I have felt a sting as Marvel and DC have poured out their entire comic roster into film.  Wonderful for their fans, but every new release I silently scream “Where’s all the 2000 AD?!”  I’m so excited to finally be able to right that wrong and bring Finley-Day and Gibbons’ Rogue Trooper, a seminal British spun war yarn, to the big screen!” said Jones.

Jason Kingsley, CEO and Creative Director of Rebellion, said: “Rogue Trooper has always been one of my favourite old school thrills from 2000 AD. I’m very happy to be working closely with Duncan and Stuart on this project and look forward to seeing the results on the silver screen.”

Chris Kingsley, Co-founder and CTO of Rebellion, said: “The first time I met Duncan he had a Mohawk – I’m tickled pink to see he’s now brought it back with a full-on Nu blue. It shows his unique level of commitment and passion for Rogue Trooper, and that’s why we’re so excited to be working with him and his legions.”

The deal was negotiated by producer Stuart Fenegan and Rebellion’s Jason Kingsley. Fenegan will produce the film under his and Jones’ Liberty Films banner, Jason Kingsley and Chris Kingsley will Executive Produce.

Rogue Trooper is one of the greatest characters to come out of 2000 AD, which also publishes characters such as Judge Dredd, Nemesis the Warlock, and Strontium Dog. Created by Gerry Finley-Day and Dave Gibbons, Rogue Trooper is a genetically-engineered soldier bred to fight on Nu-Earth, a hellish planet consumed by an endless war between the Norts and the Southers. The sole survivor of a massacre that claimed his fellow GIs, Rogue sets out on a mission to find the traitor who betrayed them – the personalities of three dead comrades plugged into his helmet, backpack, and rifle.

Jones is one of a generation of leading British film directors who have been inspired by the satirical, anti-establishment and hyper-violent comic strips in 2000 AD. First published in 1977, 2000 AD has been at the cutting edge of British culture for four decades and continues to publish ground-breaking science fiction, fantasy, and horror comics.

Liberty Films was founded in 2005 by producer Stuart Fenegan and director Duncan Jones. Established in the competitive London advertising industry, their successful creative partnership has resulted in four feature films to date: MUTE starring Alexander Skarsgård, Paul Rudd and Justin Theroux, for Netflix, launched in February 2018; WARCRAFT, for Legendary Entertainment, Atlas Entertainment and Universal Pictures, grossed $430 million at the worldwide box office in 2016; the critically acclaimed SOURCE CODE, featuring Jake Gyllenhaal was released by Summit Entertainment in 2011; and MOON, Jones’ feature directorial debut, led by Sam Rockwell, won the BAFTA Award for Outstanding Debut by a British Writer, Director or Producer in 2009. Fenegan was also nominated with MOON for the BAFTA for Best British Film.

Liberty Films have several TV and film projects in development for Jones and other rising British directorial talent.

Founded in 1992, Rebellion is one of Europe’s leading independent game developers and publishers. Whether it’s the breathtaking intensity of Sniper Elite 4, the face-hugging terror of Aliens vs. Predator or the grindhouse frenzy of Zombie Army Trilogy, the Oxford-based studio is known for creating stand-out games that thrill players.

2000 AD is the legendary weekly British anthology comic – the home of Judge Dredd and a galaxy of original sci-fi, fantasy, and horror action stars. Producing innovative and provocative comics for 40 years, it has brought the industry some of its biggest talents, from Alan Moore, Grant Morrison, and Mark Millar, to Jock, Brian Bolland, Dave Gibbons, and many more. Published in print and digital every Wednesday, 2000 AD is the Galaxy’s Greatest Comic and remains at the industry’s cutting edge. www.2000AD.com