One of the most iconic Judge Dredd artists of all time and co-creator of Chopper, Otto Sump, and so many more characters has passed away 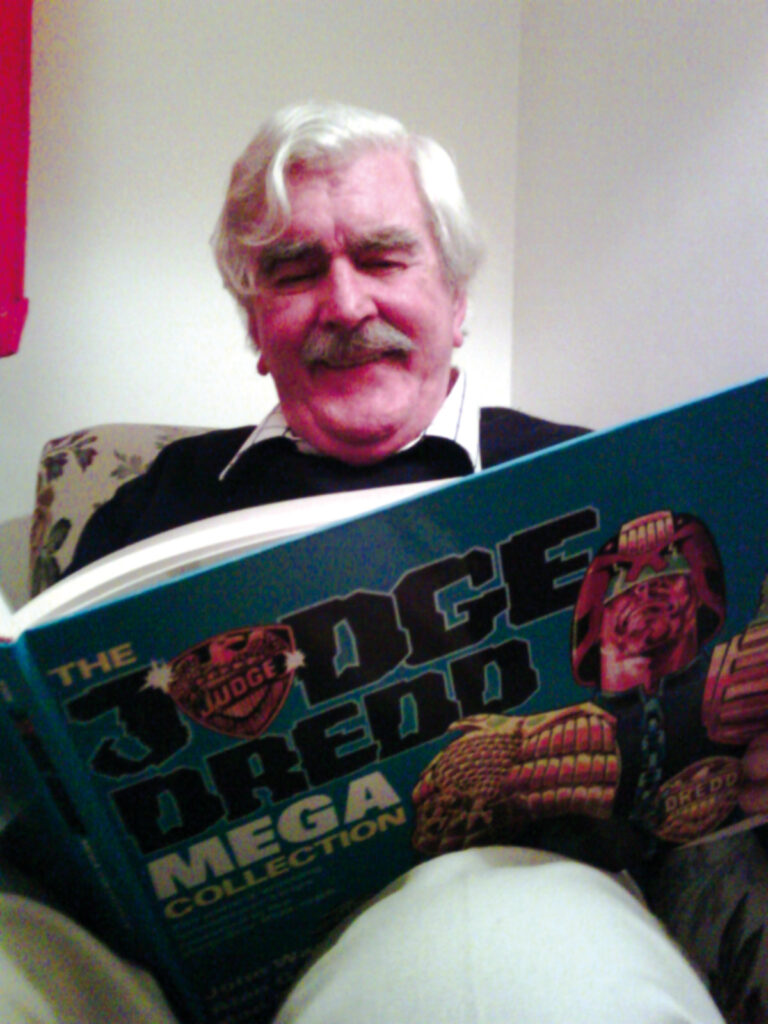 2000 AD is greatly saddened to confirm that artist Ron Smith has passed away.

A Spitfire pilot during World War Two, Ron began his career in animation before moving into comics for Amalgamated Press, then DC Thomson, before moving to 2000 AD and Judge Dredd.

During 2000 AD’s 1980s heyday, he was one of the five iconic Dredd artists alongside Carlos Ezquerra, Mick McMahon, Brian Bolland, and Steve Dillon, and many of the strip’s most unforgettable moments– from The Judge Child Quest to UnAmerican Graffiti, from The Hotdog Run to The Day the Law Died – have the name and style of Ron Smith stamped all over them.

The most prolific Dredd artist in the character’s history, from 1981 Ron also drew the daily strip for the Daily Star newspaper – one of the longest running in British newspaper history – which showcased his talents perfectly as he compressed entire epics down into a handful of panels.

His style deftly mixed action, humour, and pathos. Thanks in part to his seemingly incongruous ‘punk’ eye for design, Smith was the bizarre, warped imagination that took the biting satire of John Wagner and Alan Grant’s scripts and turned the city into a character of its own. He, arguably more than anyone else, defined the citizens of Mega-City One with characters such as Chopper, Otto Sump, Dave the Orangutan mayor, Pug Ugly And The Bugglys, The Stupid Gun, Citizen Snork, the Blobs, and so many more. And above it all stood his vision of Dredd – lithe, athletic, stoic, but with a knack for the darkly comic.

Even at a furious rate of work, the quality of his art rarely – if ever – dipped. Close up, his lines are clean and precise, panels perfectly balanced and yet losing none of their energy, their remarkable movement or scale.

2000 AD has lost another of its most treasured artists, a man whose unique work entertained millions over the course of five decades and who is sorely missed.

Matt Smith, 2000 AD’s current editor, said: ‘Ron was one of the artistic stalwarts of 2000 AD during the 1980s, and his Judge Dredd strips in particular were instrumental in making the Galaxy’s Greatest the cult, counter-cultural game-changer that redefined British comics. Like Carlos Ezquerra, his style was uniquely his own – you never mistook a Ron Smith strip – and he filled his panels with comical grotesques, his Mega-City One full of living, breathing loons. Capable of amazingly detailed work – check out his episodes of ‘Block Mania’, where he dealt with thousands of rioting citizens – and professional to a fault, it’s no wonder he was one of Tharg’s regular go-to Dredd guys. A 2000 AD legend, he will be greatly missed by fans and fellow creators alike.’

Born in 1924 in Bournemouth, Ron was forbidden from going to art college as a young man and followed his father into engineering but his studies were interrupted by the outbreak of World War Two. Enlisting as a pilot with the Empire Flying Training Programme, by 1945 he was a Spitfire pilot, seeing action in Europe as part of the Army Co-operation Air Squadron. Demobbed in 1947, he got work at J Arthur Rank’s Gaumont British Animation Studio, working at Moor Hall in Berkshire on animated shorts in the Disney style, such as Animaland and Musical Paintbox. When Gaumont’s owners, the Rank Corporation, went bust in 1949, Smith headed for London and, even before finding lodgings, went to the offices of publishing behemoth Amalgamated Press, where he got his first comics work on Sun and Knockout before moving on to Western comics, such as Comet.

Head-hunted in 1952 by AP’s main rival, DC Thomson, Ron moved with his wife to a company house just outside the firm’s headquarters in Dundee, Scotland. He then spent 21 years drawing everything from historical epics and cracking yarns in Adventure, Hotspur and Topper, to romance and slice-of-life tories for Bunty and Judy. In 1976, he created King Cobra, DC Thomson’s first superhero in the American style, which was a massive hit with readers, showing off Ron’s inventiveness and knack for action.

Moving back to Surrey, he became a fully-fledged freelancer and it was during this time that he further developed the lightning-fast working techniques that allowed him to churn out illustration after book cover after comic strip. He told the Judge Dredd Megazine about his famous technique in 2009: ‘People talk about this alarm clock – that is actually very real. The only thing that an artist can control is his hourly rate; you’ve got a fixed page, so right from the start they said to me a page of cartoons is ten pound and I had worked out that to survive in London I needed two pounds an hour, so you just divide one into the other and so you’ve got to do a page in five hours. So you set the clock, and you may not finish it but you start to get into this rhythm.

‘It used to be three pages, not six, and when I finished I was up to twenty pounds an hour – two hundred pounds a page, ten hours. But still with the alarm clock. This kept me going and meant that the bank always saw a similar amount coming in at the end of each month, because it was very hard to get banks to do things for you when you’re a freelance artist.

‘When it went ping I would literally put that page down and start on the next one. And then I would go back and sit up late at night, which is outside of my hours, and finish it off. But this got me into this way of working that meant that I could live this little middle-class life with four daughters, put them through school and on to university. Having the agent do all the leg work also meant I was sitting at home earning more of his twenty per cent – better to get him to do the leg work.’

As well as providing painted album covers for Def Leppard and Sigue Sigue Sputnik, Ron also worked Marvel UK on the TV tie-in series such as Transformers, Zoids and Mask, before moving off Dredd and onto Chronos Carnival, the early ’90s re-imagining of Rogue Trooper, Mean Team, and Harlem Heroes.

Married twice, Ron had four daughters. After retiring due to problems with his eyesight, Ron suffered from Parkinson’s and moved into a care home in Leatherhead, where he passed away in the early hours of the morning on 10th January 2019.

Everyone at 2000 AD sends his family their deepest condolences.

‘We all follow the Yellow Brick Road,’ Ron told the Megazine in 2009, ‘we’re all off to see the wizard and you should just stay on course, even if people say it’s a bloody stupid thing to do – if you’re genetically programmed, bloody go for it. It’s all part of that road… and this has been a part of mine. Yet there but for the grace of God go I.’