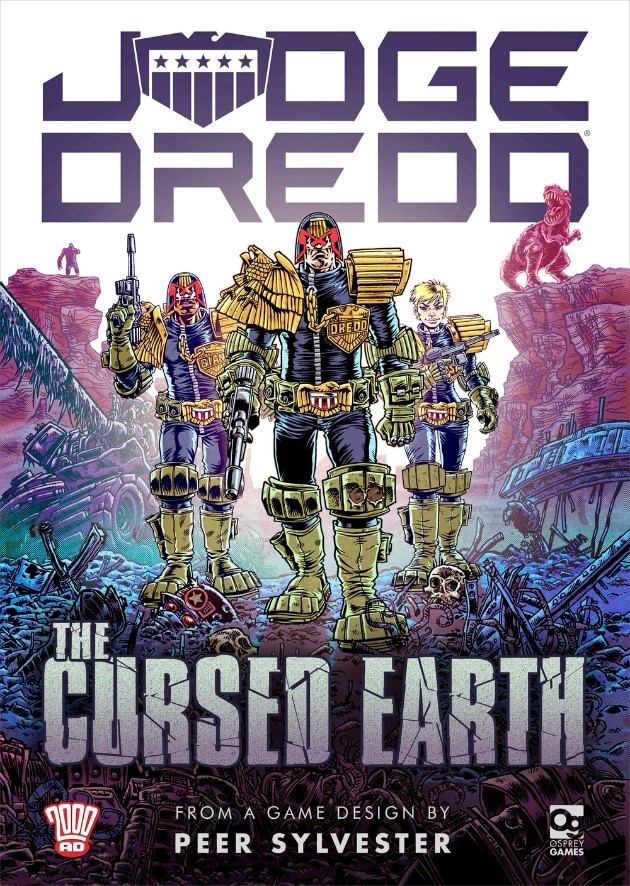 Judge Dredd: The Cursed Earth is an immersive sci-fi western based on The Lost Expedition, the best-selling card game by Peer Sylvester. Players must lead a team of Judges against dinosaurs, mutants, and the Cursed Earth itself to hunt down a dangerous fugitive, before a gang of criminals can get their hands on him. As they scour the wastelands, the team will encounter a host of threats that will push their resources and abilities to their limits.

On an impossible journey through radioactive hell, can even the Judges survive the Cursed Earth?

Rufus is a self-confessed 2000 AD superfan, and made his Judge Dredd debut in 1998. Since then he has worked extensively with 2000 AD and the Judge Dredd Megazine, with his art also featured in publications by Image Comics, IDW Comics, DC Vertigo, and more.

Rufus is providing artwork for the cover, as well as for the character and adventure cards.

Dan has been working on Judge Dredd since he made his 2000 AD debut in 2017, having impressed with his work on Rok of the Reds. His other work includes titles such as Futurequake, Dogbreath, and 100% Biodegradable.

Dan is providing artwork for the character, adventure, and landscape cards.

Duncan Molloy, Games Developer at Osprey Games, commented, “Rufus and Dan have been a joy to work with, bringing that classic Dredd feel to the game. I think fans of Dredd’s world will love what they’ve done with the place.”

A spokesman for 2000 AD said: “Rufus is well-known to our legions of fans and Dan is already making a name for himself drawing the new adventures of the ultimate lawman of the future – they’ve both brought new life to some of the classic locations and characters we all know and love from the past 41 years!”

Osprey Games is the dedicated games division of Osprey Publishing (part of Bloomsbury Publishing plc) and publishes a wide range of wargames, card games, and board games. Launched in 2014, the company has produced an array of critically acclaimed titles, including Frostgrave: Fantasy Wargames in the Frozen City, Bolt Action, Odin’s Ravens, and The Lost Expedition. www.ospreygames.co.uk

2000 AD is the legendary weekly British anthology comic and home of Judge Dredd, as well as a galaxy of original sci-fi, fantasy, and horror action stars. As well as producing innovative and provocative comics for 40 years, it has brought the industry some of its biggest talents, from Alan Moore, Grant Morrison, and Mark Millar, to Jock, Brian Bolland, Dave Gibbons, and many more. Published in print and digital every Wednesday, 2000 AD is the galaxy’s Greatest Comic and remains at the industry’s cutting edge. www.2000AD.com