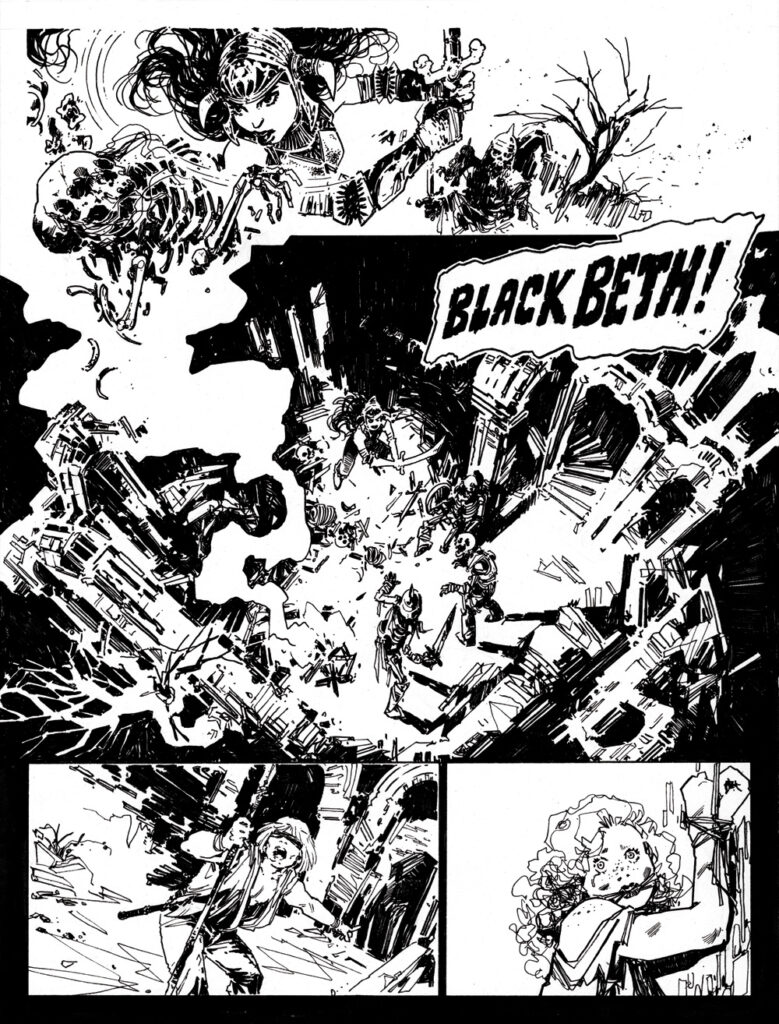 The most spooktacular time of the year is nearly upon us again, which means it’s time for the Halloween Horrors of two of Britain’s best-loved comics of the ’80s to return to haunt us – it’s the SCREAM! & MISTY SPECIAL 2018!

Featuring a petrifyingly perfect cover by Kyle Hotz and a 2000 AD webshop exclusive creeptacular cover by Lenka Šimecková, the comic is out now in print and digiral!

Inside you’ll find tales to terrify and stories to scare you stiff, including the return of The Thirteenth Floor by Guy Adams, John Stokes, and Frazer Irving, undead WWI pilot Black Max by Kek-W and Simon Coleby, Black Beth by Alec Worley and DaNi, Best Friends Forever by Lizzie Boyle and Yishan Li, and Decomposition Jones, a brand-new horrific mash-up of zombie/vampire DNA by Richard McAuliffe and Steve Mannion.

Amongst the tales to terrify, you’ll find a new strip, Black Beth, by the returning writer and artist team of Alec Worley and DaNi. Richard Bruton caught up with Alec Worley to talk terror…!

You did ‘Fate of the Fairy Hunter’ in last year’s Scream! & Misty Special and here you’re writing Black Beth. Is it a new character or something from Scream! or Misty?

ALEC WORLEY: Black Beth’s actually an old strip, albeit an obscure one… She first appeared in the 1988 Scream! Holiday Special! Oddly for a Scream! strip, Black Beth wasn’t horror, more a sword opera with occult overtones. She’s this self-made knight on a quest to punish evildoers with the aid of her blind hunchback sidekick Quido. Think The Punisher meets Red Sonja meets MacBeth!

I picked up that Holiday Special at an age when I was beginning to fall so very deeply in love with Warhammer, Fighting Fantasy, Conan, Hawk the Slayer, etc. and would obsess over any scrap of sword and sorcery I could get my hands on. When I heard there was to be a second Scream!/Misty book, I begged Keith Richardson to let me pitch him a Black Beth story with Dani…

The original strip’s actually got a cool bit of back story: it was created in the early 1970s for another IPC title (also called ‘Scream’). The identity of the writer appears to have been lost, but the artist was Spanish illustrator Blas Gallego, who was working on movie adaptations for House of Hammer at the time (and to whom I reached out while researching the pitch; an absolute gentleman!) But the comic got canned before issue one saw print and so Black Beth ended up in a drawer for over ten years! She eventually got exhumed by the Scream! editors looking for material to fill up the specials.

How do you go about creating something that has that perfectly nostalgic feel of former Scream! or Misty strips?

AW: Nostalgia is its own special poison, I think. But we did want to tap into that vintage Scream! magic – and further back to things like Warren’s Creepy and Eerie, and Marvel’s Savage Sword of Conan books. Break down what made those things work and play those same techniques but for a modern readership. Those stories are not self-aware like so many strips today. They’re not tied down by any kind of dialogue with the readership beyond telling a thrilling adventure story. So we dared to be unhip! We didn’t have much room on this one, but we really wanted to tell the kind of story that just transports you, the way fantasy comics, books, and movies do when you’re eight years old. And you simply can’t engage a reader in that way if you’re constantly cracking jokes about how dumb it all is, or having the characters rolling their eyes at the tropes of their own adventures.

We tweaked the original concept in a few ways. The Scream!/Misty specials are for a YA audience (or so I’m told), so we made Quido more of a hunk and Beth slightly younger (we based her on a young Barbara Steele). Dani wanted to do an original design for Moldred the witch, and came up with something more original and feral with all these gorgeous textures. I’ve worked with Dani twice now and hope to do so again. She’s a consummate pro, and a badass to boot!

Do you have any fond memories of either Scream! or Misty the first time around?

AW: Misty was a little before my time, but Scream! was my 2000 AD! I was at that age when I loved horror, but was too young to watch anything scarier than Boris Karloff. But Scream! was inventive enough to deliver the scares you were after without resorting to gore. Re-reading the back issues, it’s amazing just how clever and inventive many of those stories are.

What is it about both comics that fills both readers and creators with both nostalgia and a desire to see both new versions of the classic strips from the comics and new strips with a Misty/Scream! vibe?

AW: For me, this Black Beth had to be new and forward-looking, a fresh take on an old concept. This had to be primarily for new readers. The core concepts are what make these old stories work and to get the best out of those concepts they need to be plugged into a modern context by creators with a grasp of modern storytelling and keen to communicate with a modern readership.

I’ll be honest, I’m sick to death of nostalgia. Sick. Sick. Sick. From Stranger Things to Ready Player One. I’m bored out of my freaking skull by all of it. “B-b-but, what about my childhood?” Your childhood’s gone! It’s over! Let it go! Grow up! Move on. Develop. Progress. Crave and champion the new, the innovative – with the same imaginative hunger you had as a kid! That doesn’t mean you can’t revisit the past, but do it to say something new about the present! Stories have to be about more than just an exercise in spot-the-reference fan service! You’re supposed to be telling a story, not posting a bunch of memes!

With this second volume of Scream! & Misty there are fewer strips returning from the classic comics and more all-new series. For those of you who’ve delivered new strips, what is it that makes something a Scream or Misty strip, as opposed to, say, a 2000 AD Terror Tale?

AW: With a Terror Tale for 2000 AD, you can afford to be more adult and graphic (certainly today), whereas Scream! and Misty were first and foremost books for children (or young adults in Misty’s case). But that age restriction ended up becoming a creative constraint for the editors and creators, forcing them to be more inventive and find more engaging strategies to spook the readers, rather than just going for the gore or nasty twists.

Maybe it was all that spidery black and white art by geniuses like José Ortiz, but Scream! always struck me as distinctly gnarly. Like so much British horror and fantasy, it was full of grotesquery, unlike the American stuff, which always felt more slick. Misty, on the other hand, felt more refined, eloquent and dreamy, like a big sister who was really into Kate Bush!

Have any of you got any strips from Scream! or Misty that you’d absolutely love to have a go at in future if we get another special? Or more generally, given that Rebellion have access to the entire Egmont and IPC archive, If you could bring back something (strip, character, comic) what would it be and why?

AW: There’s plenty of Scream! tales I’d like to take a crack at, but Black Beth was my favourite. So I’ve already hit the jackpot in writing her, as well as working with Dani again. We’d love to bring the character back for a longer adventure sometime soon…