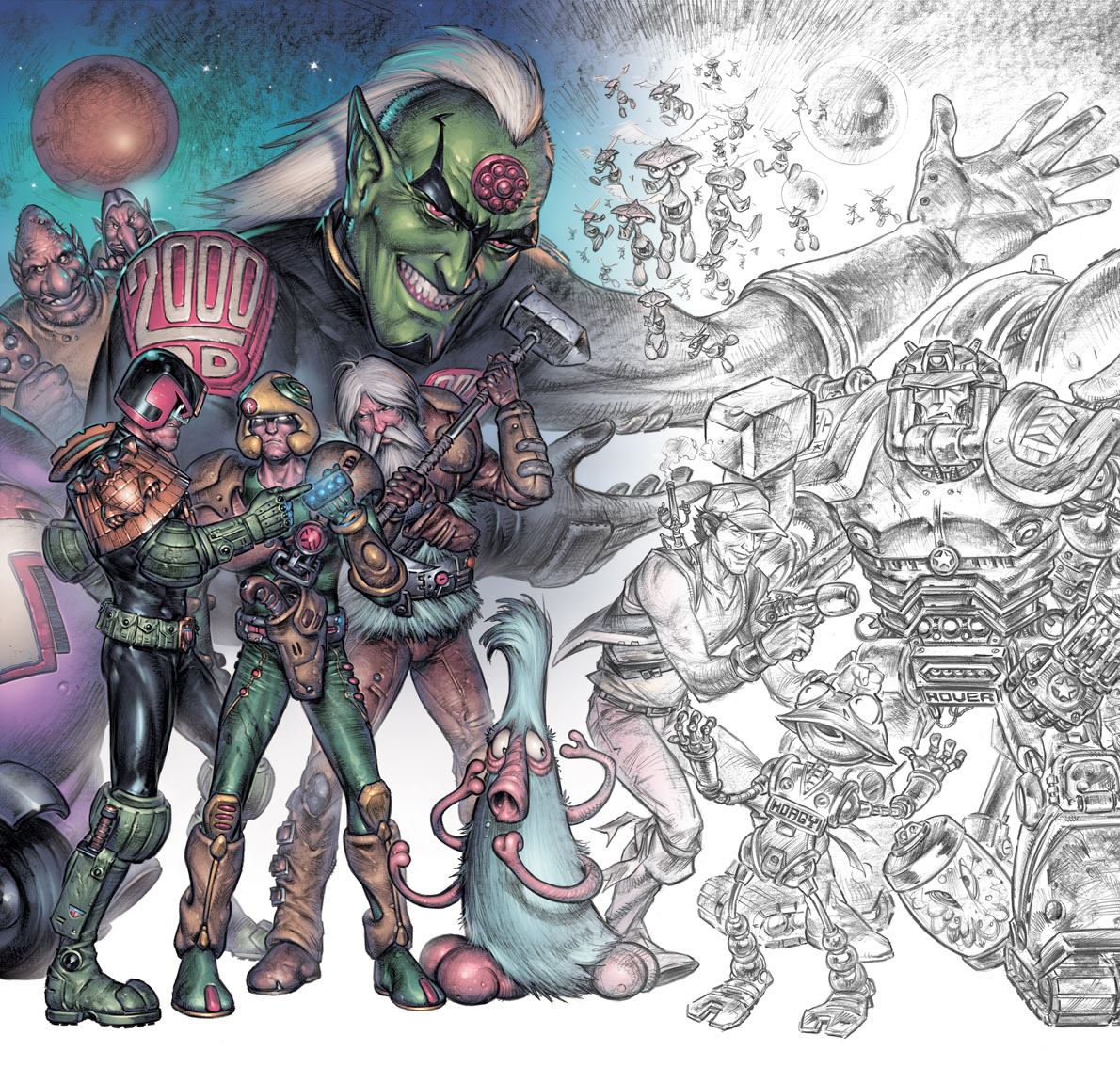 Got it? Okay then, you have been warned! All Earthlets should be aware of Hachette’s 2000AD: The Ultimate Collection by now; Eighty glorious graphic novels featuring the cream of the Galaxy’s Greatest comic! The spines of these beautiful books go together to form a brain scrambling, eye melting feast for your opical receptors rendered by the awesome artdroid that is Mr Boo Cook.

I reached out to Boo to ask if he would give us the lowdown on the image, however, on mentioning it to him, he began to wibble, then cry, before doing a complete system shutdown and sludge dump. After a reboot, a couple of pints of Castrol Super Strength and the promise of electro-therapy, Boo agreed to allow me to visit him at St Bedlam’s Home for Traumatised Artdroids.

With a glazed, wistful look, he said “When the email came through from Tharg asking if I wanted to do this job, I did possibly the longest and most flamboyant version of my ‘Mojave spirit dance’ yet – when the excitement is too much to contain you just have to do it. Seeing the list of characters he wanted portrayed on it was like looking at a role call of all the best things from my childhood to the present day! I literally took that list in the order it was written and started fleshing out the characters in a row (after adding a few extra faces, naturally – Grobbendonk, Toby etc. all the tiny stuff). As this was clearly the most complex piece of art I’d ever undertaken, I decided to do the rough in Photoshop so I could change things easier and move stuff around if necessary…“

Boo was a bit intimidated by the number of characters he had to draw, but Slaine didn’t think it too many.

Bravely, Boo continues “As I did the rough, the scope of the job was starting to become apparent, but the full terror was way off yet. I set up a grid over the rough so I could get the layout on the actual art exactly the same, as I knew there would be no room for maneuvering. I then proceeded to tape the first 3 sheets of A3 bristol board to my drawing board…”

With this, Boo began to weep. Nurse Bertha, one of the asylum’s orderlies lunged forward to ‘assist’ him, jolting Boo back into his harrowing story; “I started off by getting the basic un-dressed figures and their anatomies nailed first of all, and once I was happy with that moved onto adding the various costumes and details. Despite the fact that these are all characters very familiar to me, I’d hazard a guess that as much as 30% of the time the whole job took was spent searching for and looking at reference pics, but I was definitely having the most fun I’d ever had with a pencil! Once the anatomy and costume details were in place, I used my sacred 8B solid graphite bullet to add texture and tone to everything, then taking a HB pencil reworked everything, almost ‘inking’ it if you like. Usually for my comic work such as BLUNT, I pencil pretty roughly in 2H then ink, but it was Tharg’s inspired idea for me to use my painted style, which requires much more finessing at the pencil stage…”

Boo’s anguish momentarily abates as the Goddard droid is wheeled in, however, one look into those empty eye sockets as a result of his work on the Judge Dredd Mega Collection spine, sends fresh shivers down the Cook droid’s circuits. “After a week or so, I was ready to rack up the next three pages of bristol board, and line them up with the previous so that Bagman etc. would fit seamlessly when it was all joined. Then i proceeded to repeat the whole process again with the next characters on the list. this was about the time when I started to shit my pants a bit. For the sake of reference, I never tend to spend more than a week on a whole finished piece, so when 3 weeks was up and I found myself still PENCILLING the same piece of art things, started to get weird – if it had been any other job I don’t know if I could’ve kept it going without plunging into insanity but the joy of rendering my childhood faves really boosted me along. By the time I came to be doing the finished pencils on Kano’s boot at the far end of the spread, my entire arm up to the shoulder was in agony and my clawed hand was shaking uncontrollably like I had full blown art-zheimer’s. Yes – a pathetically useless example of human fortitude and first world problems! I felt like a rubbish Martin Sheen going up that river in Apocalypse Now, and there was KANO at the end of it – THE HORROR!! After the pencils were finished, I went to the living room and collapsed face first on the sofa. I stayed there until cider was introduced into the experiment.”

Note that Boo’s right arm had completely fallen off at this part of the process, he still has difficulty wiping his bottom.

“Finally, I sent the pencils off to the Mighty One for approval…”

Note Ro-Jaws getting fresh with Dante, he really is a lothario!

“Tharg’s only note was that I’d given him a massive ear! This was true so I fixed that before he could launch a Rigellian Hotshot my way – phew!”

“Hey Johnny! Who is der cucumber with the big ears, eh?”

“I then proceeded to spend a depressing amount of time scanning pages and trying to make them fit with each other – with 6 A3 pages this was quite tricky! A few days into the painting in photoshop the slow flow of poo from my pants became something of a torrent as it truly sank in just how long this was going to take. At this point I sent the Mighty One a progress shot so he could see how it would look eventually and pleaded with him not to dismantle me for my sloth-like turn-around. He agreed on the condition that i would muck out the Dictator’s of Zrag’s holding cells for the next 3 millennia…”

Good old Tharg, too kind for his own good. Here is the picture that Boo sent…

Nemesis is going to give Stickleback a damned good spanking for making Skizz smell his fart!

After his medication and a brief beating, Boo continues “So it was essentially just a case of building up all the layers, starting with shadows and background washes then painstakingly adding tone to the various elements. I decided it would be quicker to paint things in batches – my extremely supportive droid-wife ‘Gem-Bot’ would enter my cubicle to check my progress occasionally ‘What are you painting today?’ – ‘Today I am painting all the leathery bits…’ I would reply. The next day would come; ‘What are you painting today?’ – ‘I’m still painting all the leathery bits.’ you get the idea…”

“I was spurred on of course by some truly joyful moments – the green-ness of Waldo D.R. Dobb’s face, the gnarlyness of Kano, Feel the Freak’s tiny bug friends (that i still don’t recall the name of, answers on a postcard please).”

“After 3 and a half more weeks of sitting in a tiny chair making thousands of tiny digital marks with an exploding arm, the job was finished. It’s difficult to describe the intensity I felt working on a job this long – I had to really Zen it out and give myself a few good talking to’s, but all this was far outweighed by getting to interact with some of my closest, longest pals, watching them all joshing about with each other, 6 and a half weeks of immense, intense FUN!”

Here are some of Boo’s closest, longest pals…

Just WHAT is Grobbendonk looking at!?! Dirty boy!

“Have you stolen my tights, Blackblood?”

“What? Tharg might extend the collection? Oh Boo’s poor heartses!”

Just look at how happy Wallbanger is to be back in service!

And here is the piece in all it’s zarjaz glory…

The painting that made Boo go Boom!

As Boo is strapped onto a gurney to be taken back to his cell, erm, I mean, room, he said “I am EXTREMELY thankful to the benevolent Mighty One for bestowing this job upon my humble droidself – the joy and torment involved certainly bordered on science fiction sado-masochism at times, but I’d do it again in a flash!…maybe… after I’ve finished mucking out the Dictators…”

With that, our time is up and he is taken away. As he is wheeled down the putrid corridors of St Bedlam’s, I hear him gently sobbing, then giggling, then doing a little blow off.

Huge thanks to Boo for sending the images and brilliant commentary, I hope he gets the feeling in is arm back soon. Be sure to subscrive to The Ultimate Collection here and visit Boo’s blog here for some absolutely stunning work.