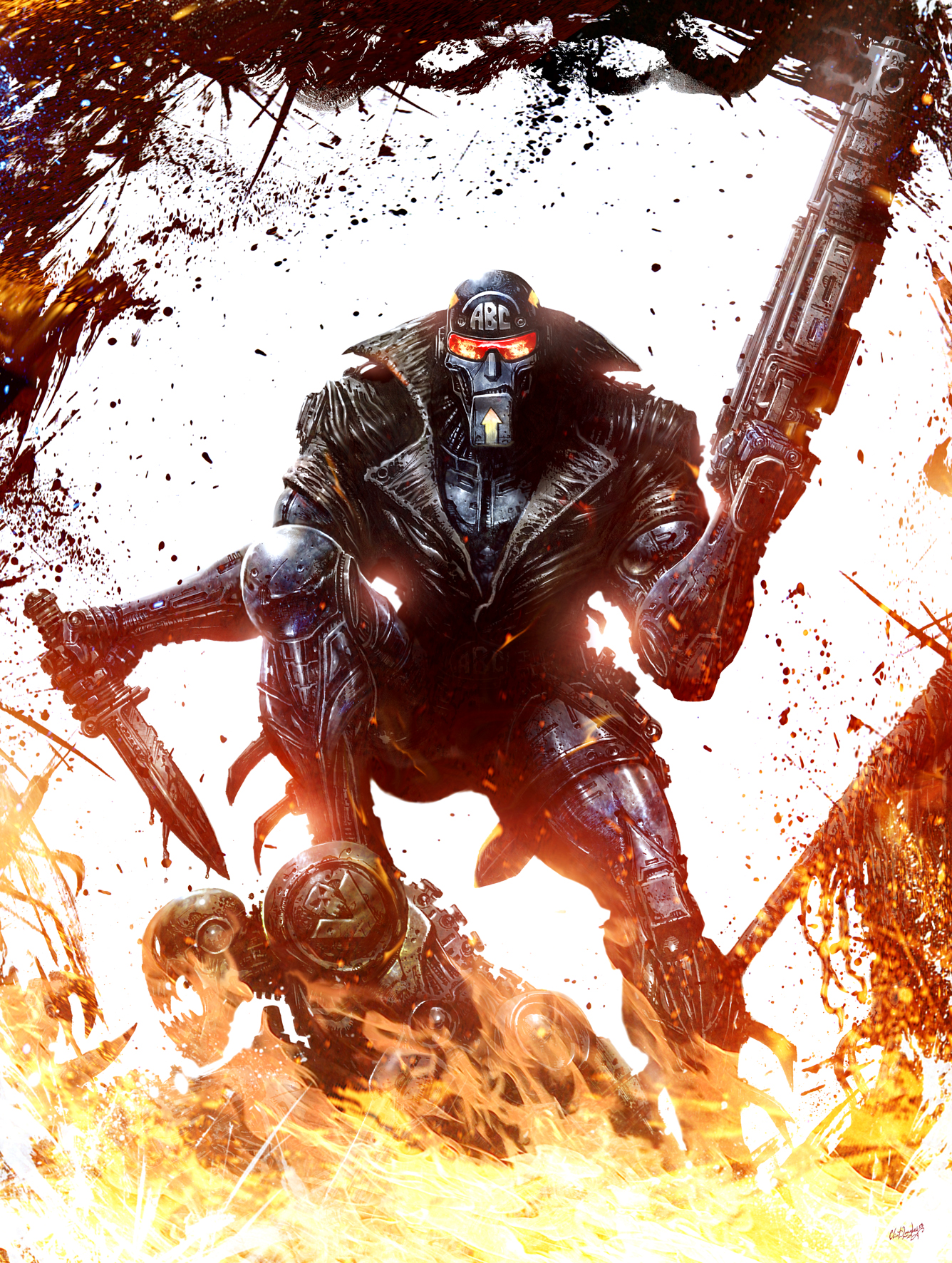 A1! Behold Clint Langley’s final, zarjaz cover in his ABC Warriors trilogy for the Fallout arc, which see’s Joe racking up those kills! I’m so pleased to present this cover, as Clint hid much of his robo-carnage with those flames of retribution! Check out Volkhan’s vanquished villains below…

Clint was also kind enough to send more of his amazing extras from the newly released, must-buy, that is the Mek Files 4 Graphic Novel. This bumper book is absolutely chock full of redesigned pages and extras, you’d be a fool to miss it!

The first extra is a mean and moody profile shot of Joe, probably deciding what he’s going to have for tea…

Why the long face, Joe?

Next up we have old Hammerstein himself, looking forlorn, as he has just stood in a steaming pile of Biol…

And finally, the mysterious Blackblood, facing his eternal, internal struggle of whether he prefers B*Witched or Bananarama…

It was murder getting those bloodstains out of his cloak.

Huge, huge thanks to Clint. Be sure to buy your copy of the Mek Files 4 here!

Tomorrow: The Making of Simon Coleby’s awesome cover of Prog 2075! 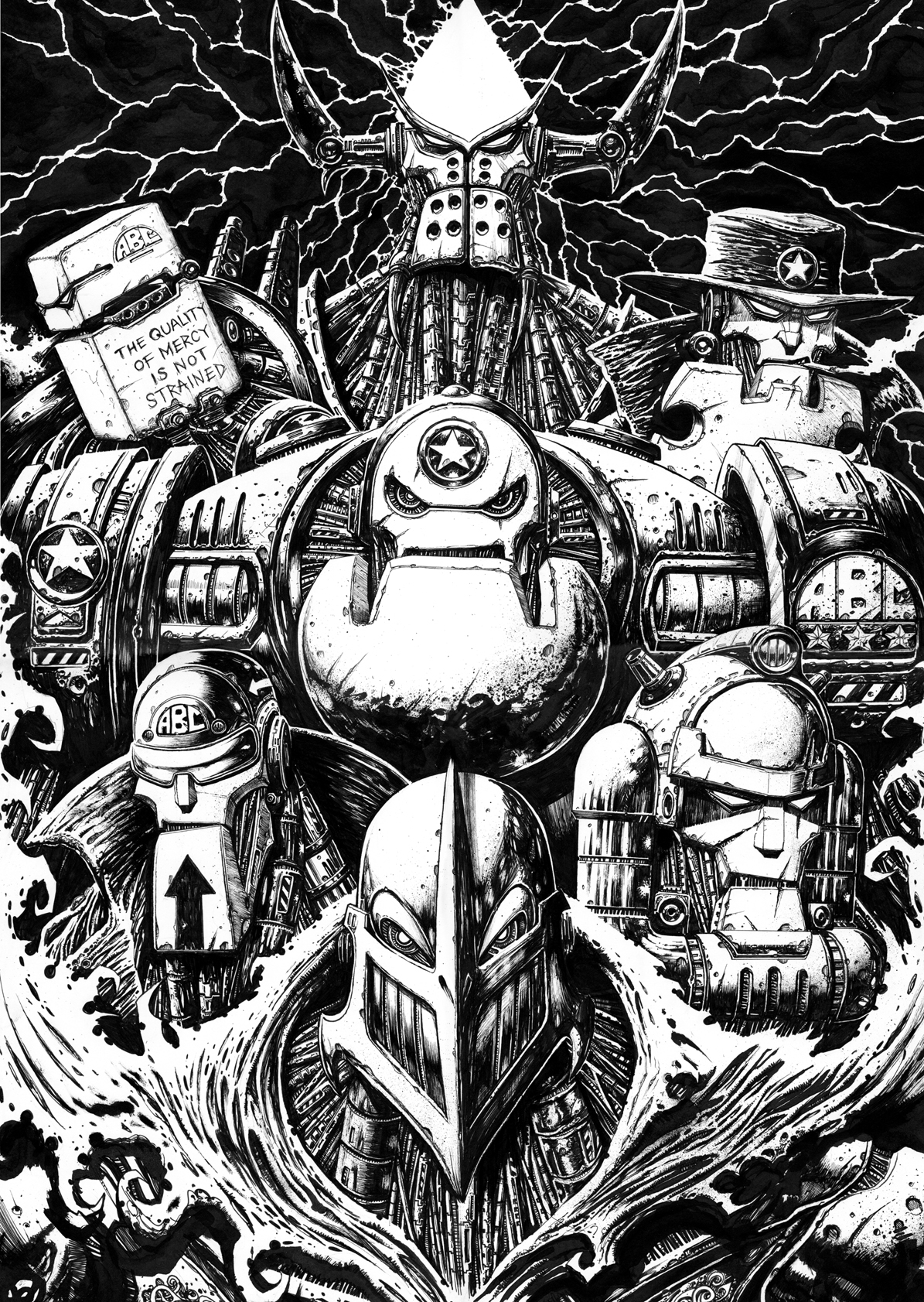 Clint Langley is back, spread the word!

Welcome to another 2000 AD Covers Uncovered which this time looks at the Deadlock levels of zarjaz Magik that Clint Langley manages to put into his artwork. Just how does he do it?

Clint has been working for the House of Tharg for an astonishing twenty four years and has been the regular artist on ABC Warriors/Ro-Busters for the last eleven, wow! I still think of him as a new artdroid!

His lush ABC Warriors Volgan War volumes are a joy to behold, with Clint completely redesigning his strip work (for example, single panels become glorious double page splashes) to expand and explore key scenes, it really is fascinating. You can see an example here.

Today we shall be looking at Clint’s artwork for the covers of Progs 2062 and Prog 2069 as well as some EXCLUSIVE bonus illustrations for the forthcoming ABC Wariiors Mek Files 4 which collects Books 1 & 2 of the Volgan War in gorgeous Clin-O-Vision!

We’ll begin with the first cover of 2018, with Tharg and Clint quite literally pulling out the big guns to start the year with a bang! The cover of Prog 2062 features everyone’s favourite ABC paratrooper, the mighty Mongrol! Below we see Clint’s glorious inks for the piece…

A more serene, but no less menacing cover for Prog 2069 see’s each of our heroes contemplating just what they are going to do to with Blackblood when they get hold of him. Again, below are Clint’s gorgeous inks…

Steelhorn’s afro was starting to get out of control.

Clint forgot to take the red eye reduction off.

Amazing! Clint also provided three exclusive illustrations from the forthcoming Mek Files 4 book, which you can order from here. The first is this cooler than cool image of the ice cold Joe Pineapples…

Q: What does Mongrol have with his fish and chips?

And finally, the treacherous Blackblood gleefully surveys the destruction of Mars…

Beneath the sadism, duplicity, treachery and deceit, he’s quite nice really.

So there we have it! A bumper 2000 AD Covers Uncovered! Thank you so much to Clint for sending the glorious images, be sure to check out his Facebook page for more insanely great images! 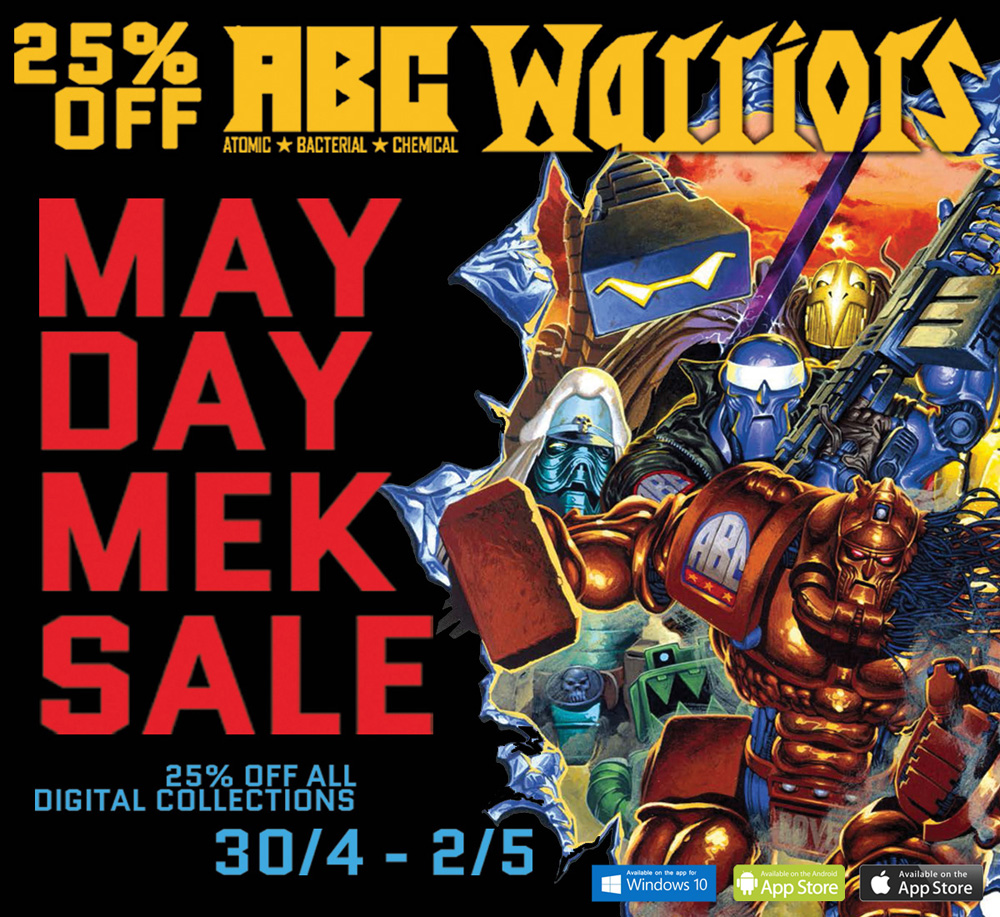 Spread the word, Earthlets – there’s 25% off digital editions of the adventures of The A.B.C. Warriors this Bank Holiday weekend from these zarjaz outlets:

A spin-off from Ro-Busters created by Pat Mills, Kevin O’Neill, Mike McMahon, and Brendan McCarthy, The A.B.C. Warriors are a team of war robots designed to withstand ‘Atomic’, ‘Bacterial’ and ‘Chemical’ warfare, and whether they’re policing the lawless frontier on Mars or saving the galaxy, the A.B.C. Warriors always succeed!

Featuring a roster of the deadliest robots ever assembled, including war-weary leader Hammerstein, super-cool assassin Joe Pineapples, master manipulator Blackblood, the hulking Mongrol and his goo-tastic friend The Mess, disciple of Khaos Deadlock and the psychotic battle tank Mek-Quake, the Warriors go where humans fear to tread!

Find out who they are and how they became the most formidable fighting force in the galaxy by reading these fantastic collections:

War droids created for a conflict that ended centuries ago, the A.B.C. Warriors are resistant to atomic, bacterial, and chemical warfare. Recruited to bring peace to the civil war-ravaged frontier colonies on Mars, the Mek-nificent Seven have recently lost two of their number—Blackblood and Mek-Quake—to the evil Volkhan’s army of hume-hating mekanoids. Now, Hammerstein, Deadlock, Joe Pineapples, Mongrol, Steelhorn, and Zippo must recruit a new member to their team – the mysterious mechanic known as Tubal Caine.

To find out more about their latest adventures, 2000ADonline.com’s Ed Kaye caught up with writer and creator Pat Mills…

2000 AD: How long after the battle with Volkhan, which resulted in the destruction of the Red House, does this new story take place?

Pat Mills: The story begins soon after, as the Warriors travel to elsewhere on Mars to persuade Tubal Cain, their armourer to join them. But this is the prologue to the real story, which is about Hammerstein’s original return to earth, following the “MeknificentSeven” adventure.

2000 AD: Not much is know about the mysterious Tubal Cain, apart from the fact that he repairs and equips the warriors. Can we expect to learn more about this enigmatic character in this series?

Pat Mills: Yes. Although the story is primarily about Hammerstein’s past adventure, there is a revelation on Tubal Cain.

2000 AD: In the first episode of the series, it seems that the team has incurred the wrath of Medusa, the planetary consciousness of Mars. What have the team done to deserve this attention?

Pat Mills: That’s the puzzle. Why, when Steelhorn is on the side of Mars, should she attack them? The answer becomes clear as the story continues.

2000 AD: Could you tell us more about the return to Earth alluded to in the story’s title?

Pat Mills: It’s just Hammerstein returning to Earth, in a flashback story, depicted in black and white. There’s some fabulous and very different artwork by Clint [Langley] in black and white. The importance of this becomes clear. Above all, it explains how Hammerstein ended up in a second-hand robot showroom, wearing a different head, and standing next to Ro-Jaws, as the Ro–Busters adventures began. There’s never been sufficient space to cover these “continuity” stories and I think this is an important and exciting one.

2000 AD: What does Hammerstein find waiting for him on his return to Earth?

Pat Mills: There’s a very hostile world waiting for Hammerstein and he is on a desperate and savage mission.

He works so well on a solo mission (as would many of the Warriors), I only wish there was the time and opportunity for more solo stories for him. He has a certain solo quality that makes him an instant hero. It’s easier in American comics where heroes can easily run solo and then team up in groups. In 2000 AD there are so many characters who would benefit from a wider canvas.

2000 AD: Given the time and space, can you see yourself going back and telling more of the warriors’ solo adventures? Or would you ever let other writers do so?

Pat Mills: No. I’ve had other series screwed up by other writers, e.g., Charley’s War. So I may well write new solo stories…

2000 AD: Many artists have worked on A.B.C. Warriors over the last 33 years, but the last few series have exclusively featured the digital artwork of Clint Langley, with whom you have also worked on Sláine and American Reaper. What do you think sets his artwork apart from other artists who have tackled the characters?

Pat Mills: The colour versions of the A.B.C. Warriors showed the robots huge visual potential as never before. So much so, there have been several European editions and great interest in America. When we were signing copies in San Diego a couple of years back, they were outselling everything else. Much of this is also down to Clint’s “extras” in the collected editions, which would not be possible without digital, and takes the story, and characters, to another level. There’s also a lot to be said for having long term writer and artist continuity on a serial. It creates an intimacy with the characters that the readers share. I’m very excited by it.

2000 AD: You mentioned that Clint is drawing the flashback episodes in black & white. This is quite the departure from his normal style, what can you tell us about that?

Pat Mills: Clint’s black and white work on this story says something new. I think it’s to do with his understanding of the character of Hammerstein and—in some strange way—bringing the knowledge and expertise he’s acquired on the digital version into this traditional black and white interpretation.

2000 AD: The ‘Volgan War’ storyline saw two members leaving the group—Blackblood and Mek-Quake—to join forces with the hume-hating Volkhan. How has this betrayal affected the team?

Pat Mills: I think on one level the team are more at peace with one another. But the conflict with Blackblood and Mek-Quake meant they tended to steal the show. Now they’ve gone, there’s space for new tensions and conflicts to emerge.

2000 AD: At the end of “The Volgan War,” Blackblood and Volkhan were down but not defeated. Can we expect to them take revenge any time soon?

Pat Mills: Not in this story, as it’s about  Hammerstein’s solo adventures. But ultimately, yes, they will come back into the picture. We have—in effect—two rival groups of warring robots in a hellish city on Mars. That has a lot of potential.

2000 AD: Earlier, you mentioned developing the continuity between A.B.C. Warriors and Ro-Busters. Long-time fans have also seen crossovers with Savage and Nemesis the Warlock. Is this shared universe something you planned when you started writing these stories, or has it just fallen into place like that?

Pat Mills: It was written this way very much in response to circumstances, e.g., for years no artist wanted to draw A.B.C. Warriors, so they had to guest in Nemesis the Warlock.

2000 AD: Can we expect any connections to show up in your other ongoing series, like Defoe? A steampunk A.B.C. Warrior fighting zombies might go down rather well!

Pat Mills: An amusing thought, but unlikely! I think Savage worked well with pre-Ro-Busters era but I wouldn’t want to push it. Certain stories needed a proper linking story and some readers expressed a desire for them, so “Return to Earth” was written with this mind.

2000 AD: Do you have a favourite moment or line from the story that you would like to leave readers with?

Pat Mills: Yes. But I shouldn’t give the story away. So forgive me if I’m being a little mysterious when I say my favourite moment is later in the serial when Hammerstein sits on a certain famous table and breaks it with his weight. Clint hasn’t drawn it yet (we’re tight on time!) but I can’t wait to see it! It’s a funny moment and rather embarrassing for Hammerstein – and I enjoy those moments where he becomes rather flustered.

2000 AD: Curious. Keep reading the weekly progs to find out exactly what the Mills droid is referring to. Meanwhile, I’m going to go and command the Gallagher art droid to draw me a steampunk version of Hammerstein!

“A.B.C. Warriors: Return to Earth” begins in 2000 AD Prog 1800, which is available now from all good newsagents in the UK, and will be available in North America in October. Alternatively, you can purchase a same-day digital copy by downloading the 2000 AD iOS app, available here!

To catch up on the A.B.C. Warriors’ past adventures, check out the line of graphic novels available from the official 2000 AD shop!