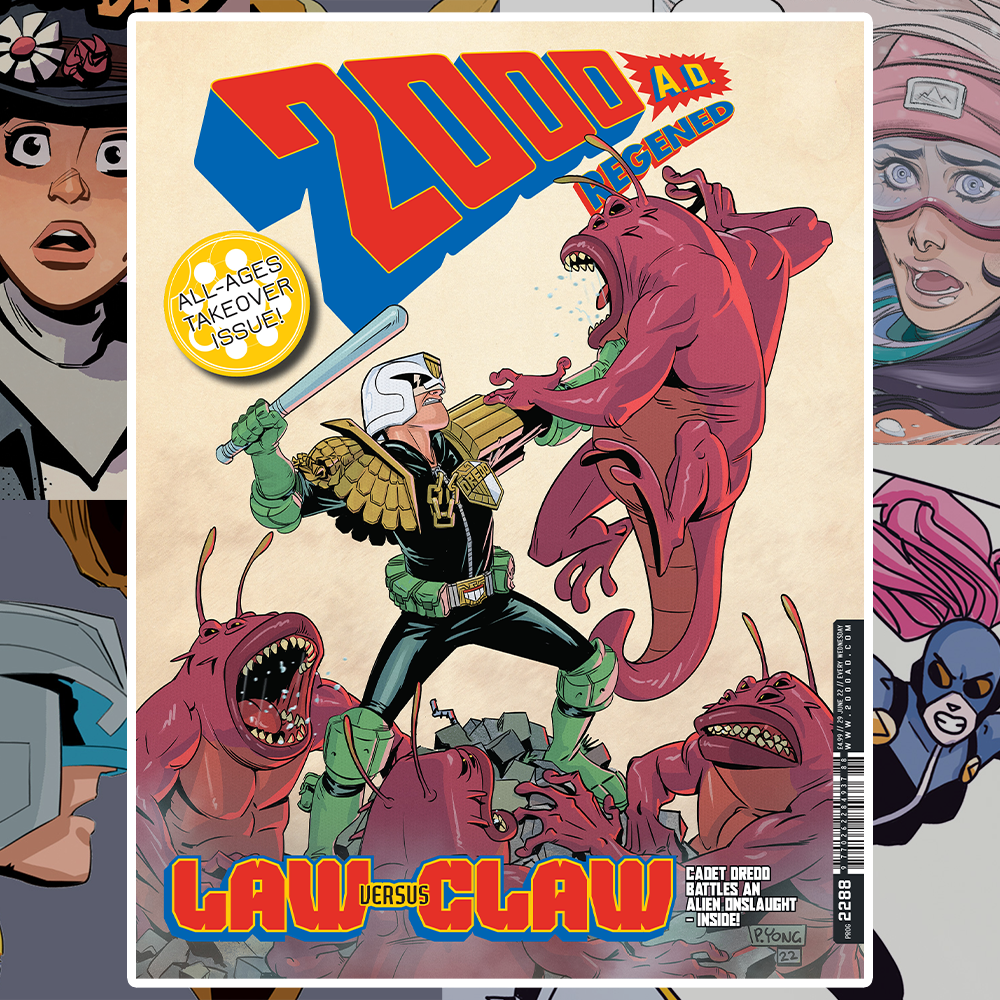 2000 AD‘s all-ages special Regened returns in Prog 2288 – out now from all good newsagents, comic book stores, and digitally from the 2000 AD webshop and app!

It’s that time once again when Joko-Jargo storms the Command Module, temporarily boots his Uncle Tharg out of his office and assumes control of the Galaxy’s Greatest Comic!

In this zarjaz all-ages issue you’ll find another case for Cadet Dredd as he investigates disappearances at the Alien Zoo in Zootrapolis by Liam Johnson and Joel Carpenter; Roger Langridge and Brett Parson reunite for a new Pandora Perfect caper as a giant chicken rampages through the city; wheeler-dealing duo Scooter & Jinx return and must track down a missing actor in The Big, Grand Souffle of Nothing; we head back to the rundown comprehensive school for wizards for the second episode of David Barnett and Anna Morozova’s Lowborn High as Andy Frost is co-opted into the Orbitus playoffs; and there’s a mind-bending short story in Future Shocks: Into the Void from Karl Stock and Tom Newell!

Remember, humes, if you missed any of my previous Regened issues, you can now get the stories in four scrotnig book collections, available from shop.2000AD.com.

2000 AD Prog 2288 is out now from all good newsagents and comic book stores, plus digitally from our webshop and apps! Don’t forget that if you buy an issue of 2000 AD in the first week of its release then postage in the UK is free!

Mega-City One, 2076 AD. Home to over 800 million citizens, this urban hell is situated along the east coast of post-apocalyptic North America. On one side is the polluted Black Atlantic, and to the west is the blasted radlands of the Cursed Earth. Overcrowding in the metropolis is rife, unemployment is at ninety per cent, boredom is universal and crime is rampant. Only the Judges — a zero-tolerance police force empowered to dispense instant justice — can stop total anarchy. CADET JOE DREDD — together with his clone-brother Rico — is a rising star in Justice Department, and will one day be its finest officer. Make no mistake, he is the Law!

For as long as anyone can remember, Wychdusk Manor has been the school to which all the top magical novices are sent, where they are trained to become the world’s greatest wizards. There, students are taught every form of spellcasting by the wisest of mages, and to be part of Wychdusk’s alumni is an incredible honour. But what about those that don’t make the grade, that don’t have the talent or the family name to make it to this prestigious establishment? For them, there’s LOWBORN HIGH, a rundown inner-city comprehensive that is often struggling with funding, but its pupils can still be capable of some truly amazing feats…

FUTURE SHOCKS: INTO THE VOID

Out in the vast reaches of the universe, there are an infinite number of stories waiting to be told. These cautionary tales pass from traveller to traveller in the spaceports and around campfires on distant planets, acquiring the status of legend, their shocking ends a salutory lesson in hubris. Anything is possible in these twisted trips into the galaxy’s dark side. Abandon your preconceptions, and expect the unexpected. Now, at some point in the future, the online world will become ever more sophisticated, allowing users to leave reality — or solidstate — behind and exist in an environment of nothing but memes and dreams…

SCOOTER & JINX: THE BIG, GRAND SOUFFLE OF NOTHING

Scooter Occultatum was working at Mondo’s Mektail Bar on Eco- Point when she encountered Jinx Calhoun, a rogue and a thief, who has more than enough secrets of his own and plenty of enemies with scores to settle. When gangsters came after them, keen to get their hands on something Jinx had stolen, the pair went on the run, Jinx discovering in the process that Scooter is in fact a Bone Machine, a highly lethal cybernetic organism. When Jinx was severely wounded, Scooter managed to save his life but lost her self-repairing functionality — and the two became bonded at a level neither them fully understands…

Earth, the far future. While the towering starscrapers and flying cars may make this look like some idealised Utopia, crime is still a major problem, and there’s no felon more wanted than the nefarious Pandora Perez — burglar, safe-cracker, armed bandit and all-round career criminal. Just when the authorities thought that they’d finally managed to incarcerate her, her loyal robot assistant Gort came to her rescue and succeeded in breaking her out of her cell. Despite being a wanted woman, Pandora’s still up to her usual confidence tricks, and now she’s looking to score a big payday by stealing some pills that increase the size of poultry… 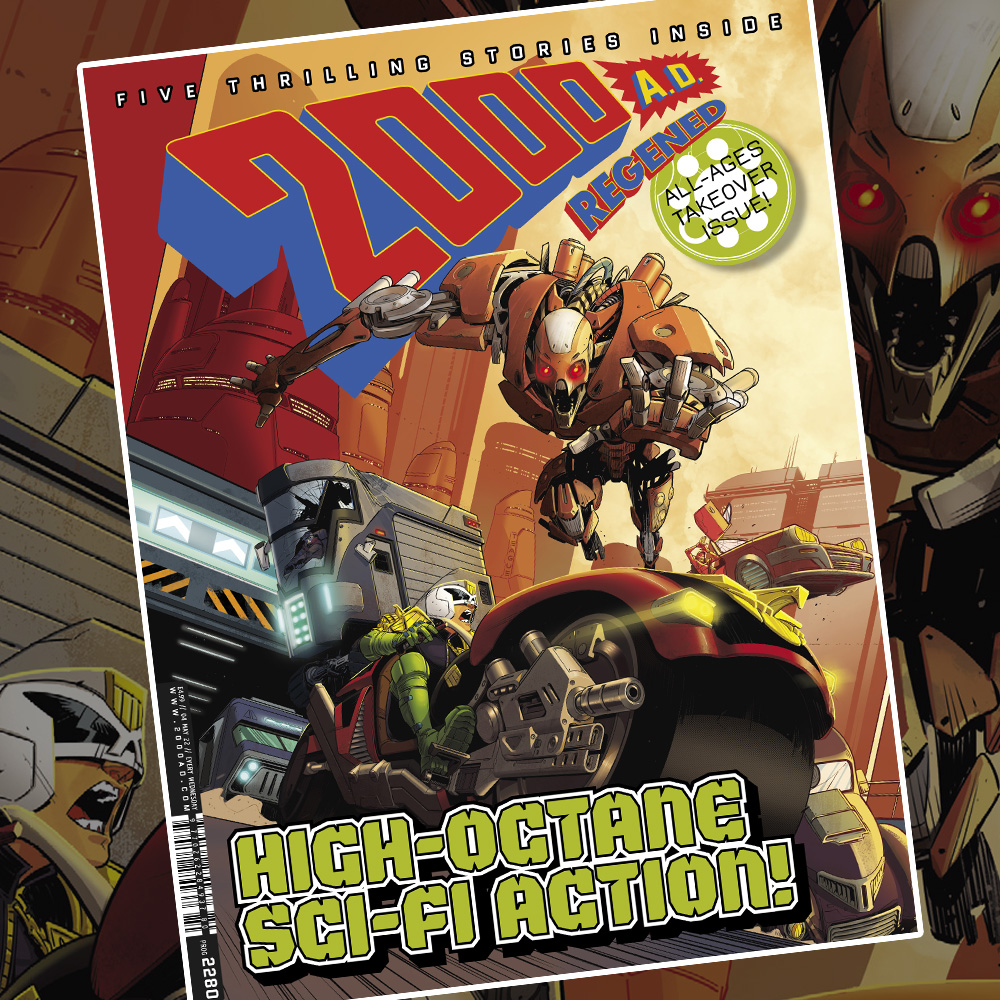 2000 AD‘s all-ages special Regened returns in Prog 2280 – out now from all good newsagents, comic book stores, and digitally from the 2000 AD webshop and app!

Joko-Jargo brings you another special all-ages edition of the Galaxy’s Greatest Comic – precision-tooled to engage as inclusive an audience as possible!

And what a line-up — Cadets Dredd and Rico investigate med-supplies being released onto the streets in Red Medicine; skysurfer Chopper has a mystery of his own to unpick when Boingers start going missing in What Goes Up; there’s a complete Future Shock as household appliances become aware in Smart Home; the unruly Class Omega-Default IV (who first appeared in Prog 2130) return in The Unteachables; and Lowborn High makes its debut, showing where student wizards go that don’t manage to make it into the prestigious Wychdusk Manor academy!

2000 AD Prog 2280 is out now from all good newsagents and comic book stores, plus digitally from our webshop and apps! Don’t forget that if you buy an issue of 2000 AD in the first week of its release then postage in the UK is free!