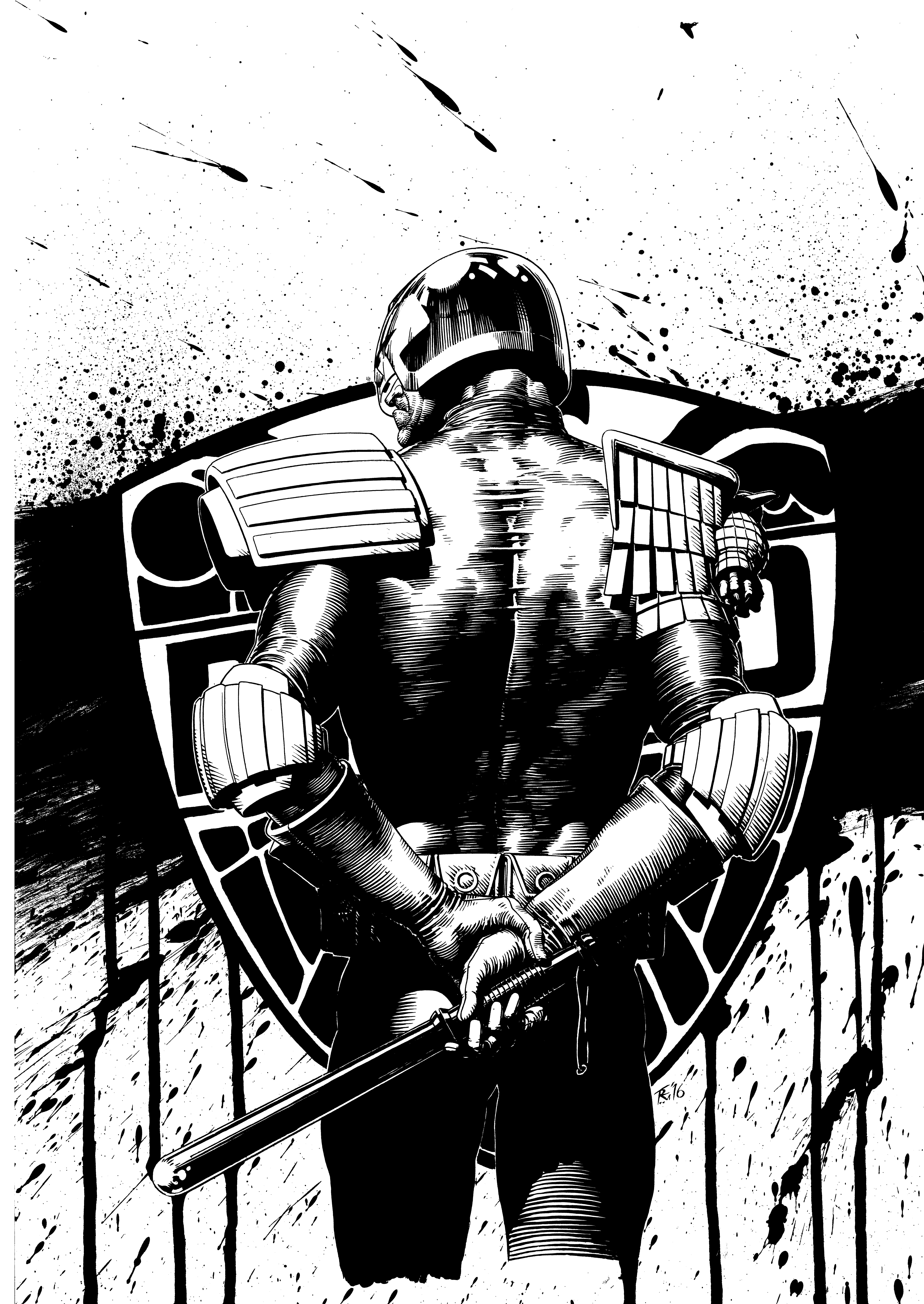 Welcome to the first official 2000 AD Covers Uncovered – with your host, superfan Pete Wells! Take it away Pete…

Each week we will explore how the covers of Tharg’s mighty publications are created with commentaries by artdroids, exclusive images and a whole host of Grud-awful puns!

It is fitting that this inaugural cover breakdown features the debut cover of the brilliant Tom Foster. Tom kicks off the brand new Reclamation storyline in fine style with this cover that is already an instant classic. Dredd has been shot, blown up, teleported to a Brit Cit hospital, probably got infected with MRSA and is still taking the fight back to those rotters from Texas City. Yeehaw!

I asked Tom to tell us about his exciting first cover, he said “I had had the idea for a Dredd image with this basic design for a while – ever since I finished my first assignment for 2000 AD. I thought I’d do it and put it up on my Facebook page as a way of oh-so-gently implying that I might be a good fit for Dredd. Thank god I didn’t because a) It probably would have been considerably worse, given my inexperience b) It wouldn’t have been published c) I wouldn’t have gotten any money. So, when Tharg approached me earlier this year, asking for some ideas for a generic Dredd cover, I had one in the chamber ready to go. I did a 3D digital mock-up (as is my usual practice) and sent it to him along with two ideas I quite liked. I quite liked them, but they remained in the clip (this one being in the chamber), as the original idea, having had the longest gestation period, was probably the most fully formed.”

Tom continues “Luckily, I had also taken some reference photos of a big, strapping friend of mine when I originally thought of the idea. You can see how little the basic idea really changed since then…”

That’s how he rolls…

“The pencils were done according to my usual method: basic proportions and layout traced from a printout of the digital mock-up, and then worked into heavily with reference to photography and the original 3D render itself.”

Dredd looked upon his dirty protest and was happy…

“Then inks with a sable brush. I ditched my first attempt at the inks about a third of the way through as I was a little out of practice and wasn’t satisfied with the quality, but, second time ’round, I was pleased enough with it to only make changes with white-out. Then I cut out a Frisket Film mask to cover Dredd, taped the piece to my bathroom wall and splattered ink all over it with considerable relish. This was risky and, at one point, I thought I’d completely gone too far. Luckily it sort of just worked out as those one-shot deals often do.”

“Yes! Stand in the corner Joseph and we do NOT want to see your silly face”

“After that, a scan, a colour removal, a conversion to bitmap and I was ready to rock. And by ‘rock’ I mean sit in front of a computer for hours, drawing with a big plastic pen.”

“Hmmmm, Chopper seems to have changed his MO…”

“The colours I did digitally. I don’t use a lot of layers when I’m colouring, certainly not for the purposes of rendering, as I think they can give the work a bit of a weird, translucent look and I like my rendering to look as solid and three-dimensional as possible, even if that means taking a bit more time over it.”

Dredd was SURE someone was trying to tell him something…

So, was Tom okay with the printed piece? He said “I’m very happy with the finished digital image. I think I may need to work on getting my stuff print-ready as I’m never 100% confident of how they’ll come out of the four colour ink-beast, but generally I’m really pleased with what I’ve done with it. He looks like Dredd, and that was my first priority. There are a couple of little niggles here and there, but nothing I’d have an anxiety dream about. All around, massive fun and a great little assignment to cherish as my first cover.”

Too drokkin’ right! That cover is absolutely amazing and has quite rightly received universal acclaim! Congratulations to Tom on his first of hopefully many brilliant covers and a HUGE thank you for sending the fascinating glimpse into his workflow (and kitchen!)

Check out Tom’s Deviantart gallery here for more of his amazing work. 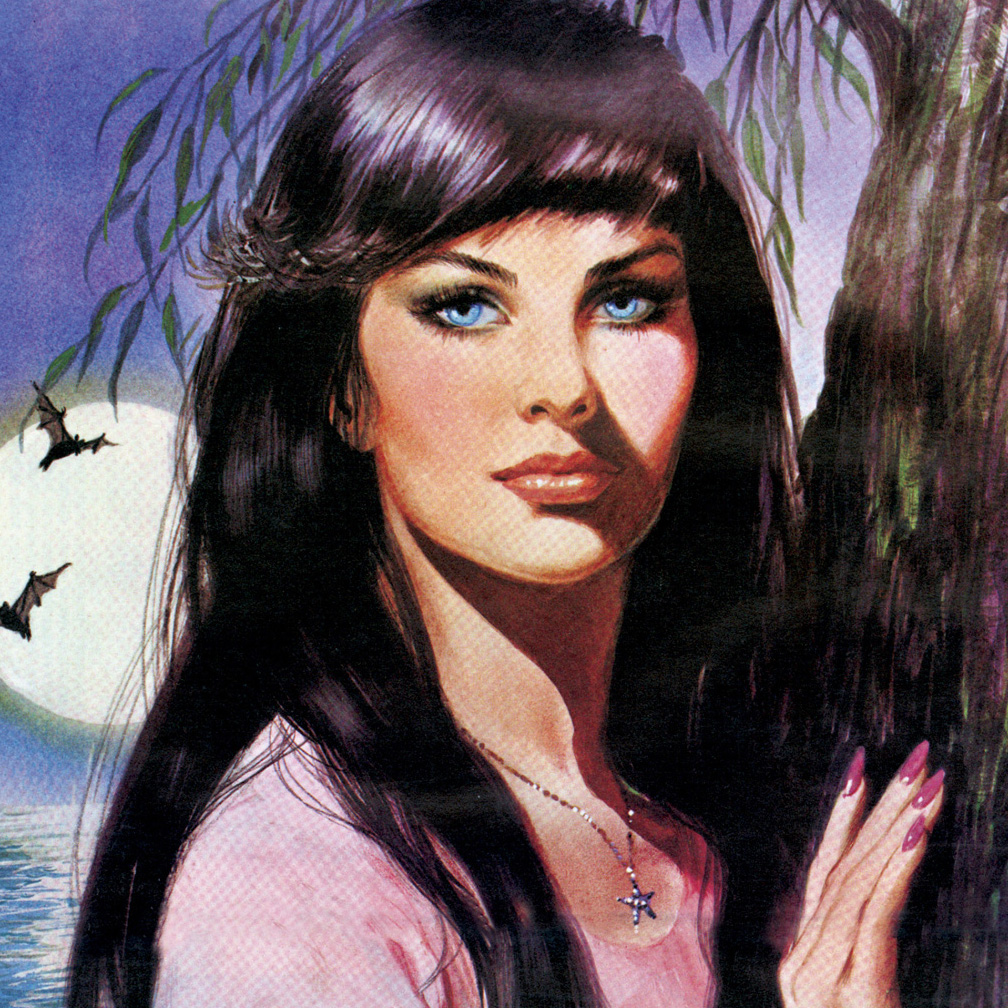 A classic horror comic from the 1970s that was aimed at young girls is seeing the light of day once again thanks to 2000 AD publisher Rebellion – and we’re pleased to reveal the cover for the collection of strips from Misty.

Rebellion, with the cooperation of rights-holders Egmont, is to reprint Misty content from creators who are also well known for their 2000 AD work, beginning with 2000 AD’s first editor, Pat Mills.

The first volume of Misty material, featuring “Moonchild” by Pat Mills and John Armstrong and “The Four Faces of Eve” by Malcolm Shaw and Brian Delaney, will be published this September.

The cover for the collection uses classic artwork by Misty regular Shirley Bellwood, who sadly passed away earlier this year, with design work by 2000 AD lead design droid Sam Gretton.

First published in February 1978 and intended as ‘2000 AD for girls’, Misty was a weekly anthology horror comic that featured such as “The Sentinels” which saw the years 1978 and 1940 linked via two empty tower blocks, and “Moonchild” about a girl with telekinetic powers.

Over 101 issues between 4th February 1978 and 12th January 1980, Misty’s darker tone, strong visuals, and more sophisticated stories with an emphasis on the supernatural and horror went down a storm with its readers. Fans of Misty have been campaigning for a number of years for the classic strips to be reprinted.