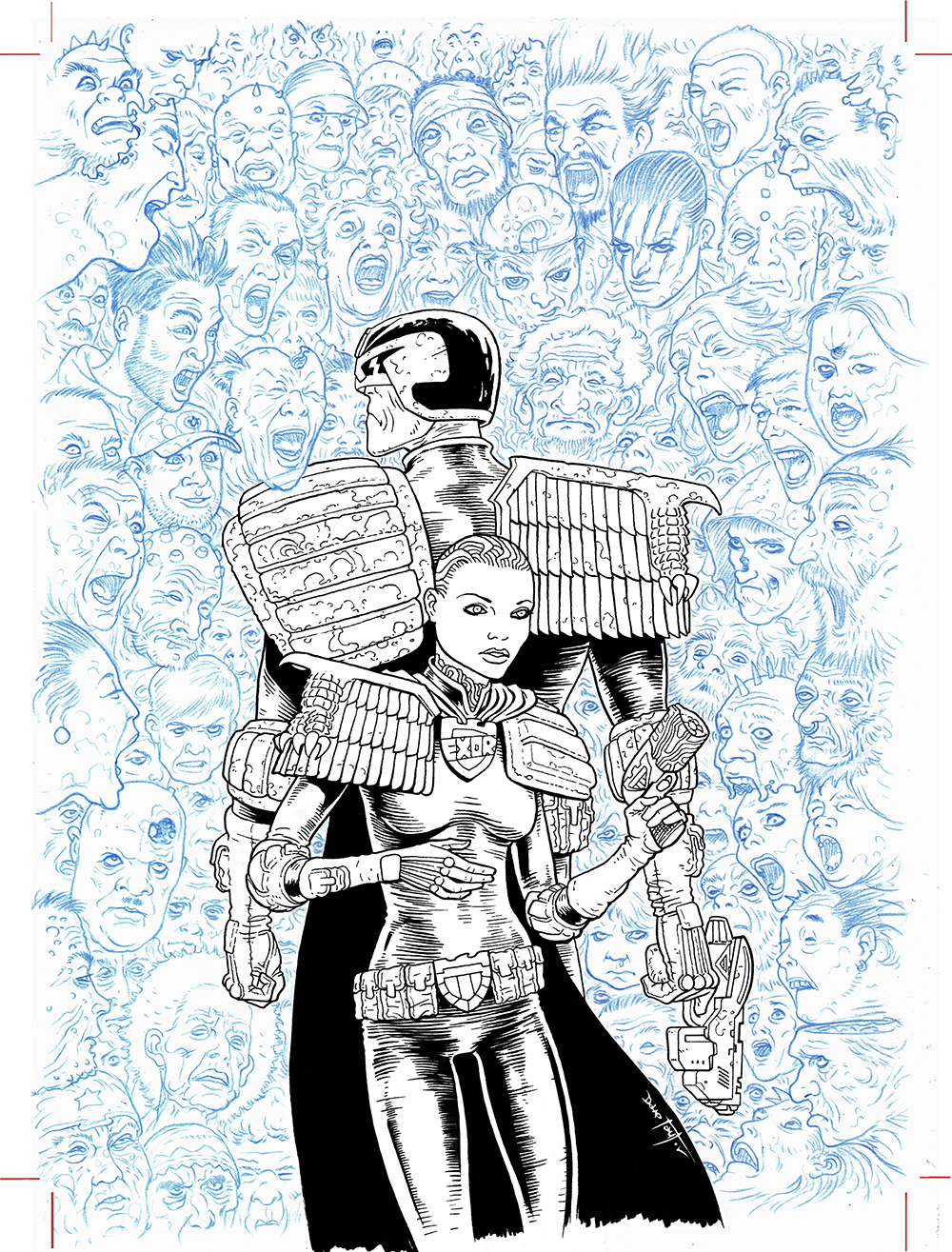 Wow! How’s that for a creepy cover? The master of intricate detail,  Dave Taylor, brings another insanely complicated cover, I swear Tharg has implanted him with a masochist chip!

Current Judge Dredd tale Live Evil sees Mega-City One’s premier lawman reunited with Exorcist Judge Miryam Lamia. The troubled exorcist judge has an overactive sixth sense which allows her to see dead people, which, since the tragic events of Chaos Day, means she doesn’t get much peace. Imagine when she goes to the toilet!

When a deep space vessel crashes in Mega-City One and the crew are all murdered, Dredd calls on the troubled judge to help him get answers, whether she wants to or not…

I asked Dave to give us the lowdown on the creation of the cover, he said “Below is the sketch for the cover I did; very fast and very small. Fast to capture as much energy as possible and small because if it works small it’ll work big. That’s a rule. Follow it or be a foolish one.” (Try telling that to my wife – Pwls) “Tharg saw it, liked it, and gave me the big thumbs up, so to speak. He knows a good thing when he sees it. I knew it was a strong idea, now I just had to do the near impossible, which is to get the published image as good as it…”

Lamia and Dredd try a bit of crowd surfing…

Dave continues “I spent an hour or so hunting for the ghost faces in reference books and the net. I had a firmish idea of what level of caricature I would use (level 4 if you’re interested), not wanting the folk to look too cartoony like I do in the story, a little. Level 4 requires you to keep most of what you see in the photo and play around a little with the features. This is fascinating isn’t it? I got the face of Dredd, or FOD as we droids call it, just as I’d hoped I would. I see his skin as cling film, vampiric; his face aged as an Egyptian mummy. It was going well.”

“Lamia was different matter. She’s a little aloof and doesn’t like sitting for long periods, but I got there eventually. I’m still not that sold truth be told.”

Typical, Lamia gets a new hair dryer just as she shaves all her off!

Dave continues “THE FUN BIT! I go in and out of the love of inking. I’m like that. Deal with it. I love another, her name is pencil. Man, she’s a hot one. I can’t put her down sometimes.”

Dave sets the tone of the piece; “Took me a while but I eventually settled on this overall colour. Weird thing is that I usually mess about with the base colour a lot. A very lot. This one stayed as it was. You don’t know how weird that is. I do.”

“Now I start in on the “flats”. Some people live in flats, but that’s not what we’re talking about here. Or apartments. This is about laying down the basic, overall colour for each part of the figures (or whatever). Easy to fix as you go if you keep everything on separate layers (on photoshop), which brings me onto…”

Dredd has totally busted that one on the left in the cap staring at his boobs.

“My former self was telling you about the impotence of layers. While colouring Lamia I became somewhat stupid, rash almost, to the point of doing her whole figure on one single layer, probably without saving too, which is madness. Got away with it.”

It must be quite nice for Dredd not to be surrounded by people that’s HE’s killed for a change!

“This is the fun bit of colouring for me. The lighting. This is where you make your characters (Judge Dredd, sadly, is not MY character, but you feel me) come alive. You shape and form the figures…like…real shapes and stuff. It’s great!”

Dave needs to be careful, he’s having too much fun. The Mighty One will not stand for that…

“Lamia’s face is cold, I’m sure of it. I’ve not actually had the opportunity to actually touch it, but it looks cold, doesn’t it. The moment I add a little feminine colour to her cheeks it all goes horribly wrong and I have to start all over again.”

That guy on Dredd’s shoulder has a splitting headache!

“Once I’ve completely redrawn from scratch the entire image and have got to where I was with the now destroyed first pathetic attempt with the colouring, I remember this time to do her tats. These are living tats. Not like you have, or your older brother. No, these are ALIVE!!”

Got herself some cryin’. talkin’, sleepin’, walkin’ living tats!

“Hey, talking of things alive, I seem to have forgotten all about our ghosts, which are dead. Remember when you, or that nasty tattooed bigger brother used to get a torch and hold it under your chin? No, nor do I.”

I hope they’ve had some breath mints…

“Finally, as a sign of respect, I add some grit to the ghosts here collected. That’s all you need to do. Goodnight, and thanks for having me over again. I like the carpet.”

Who ya gonna call?

Phew! Thanks Dave, that was amazing! The scary thing is, Dave’s interior artwork is every bit as stunning and intricate as his cover work and he still finds the time to write this for us. What a droid!