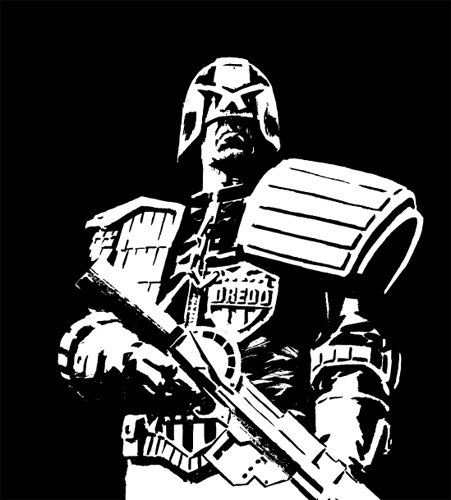 Rejoice Earthlets as the 40 Year Special is finally ready to be beamed to your Optical Receptors! The mighty one has pulled out all the stops to bring a Prog jam-packed with some of the very greatest Thrills from the very best creators!

With veteran artdroid Carlos Ezquerra providing the cover for the 40th Anniversary special, it was going to take someone pretty special to produce an alternative cover. Enter award winning cover artist and Dredd fan, David Aja! David produced this gritty Dredd cover that sums the character up perfectly!

David was thrilled to be asked, having been a fan of Dredd since he was seven years old. Below, we see his thumbnail fo the cover…

“I just picked it up and it went off!”

Of course, the thumbnail was accepted by the mighty one, however, David did submit an alternative idea which looks awesome! Check it out below…

“Last one to the hottie stall is a Simp!”

Here are David’s wonderful digital pencils, like the Gruddamn Statue of Judgement!

The Lawrod – when you absolutely, positively have to kill every Motherdrokker in the room.

With the image inked and coloured, David has a play with logo placement, to give a feel of how the finished cover will look…

And finally, the finished piece. Grud on a Greenie, that is an outstanding image. Pure, unadulterated Dredd!

He really IS the law.

David was also kind enough to send a Dredd head he did ‘for fun,’ how cool is that!?!

In a league of his tone (Alpologies for that pun, terrible by even my standards! PWLS)

MASSIVE thanks to David for sending the images, be sure to check out his awesome blog here.

The 2000AD 40th Anniversary Special is ON SALE NOW!