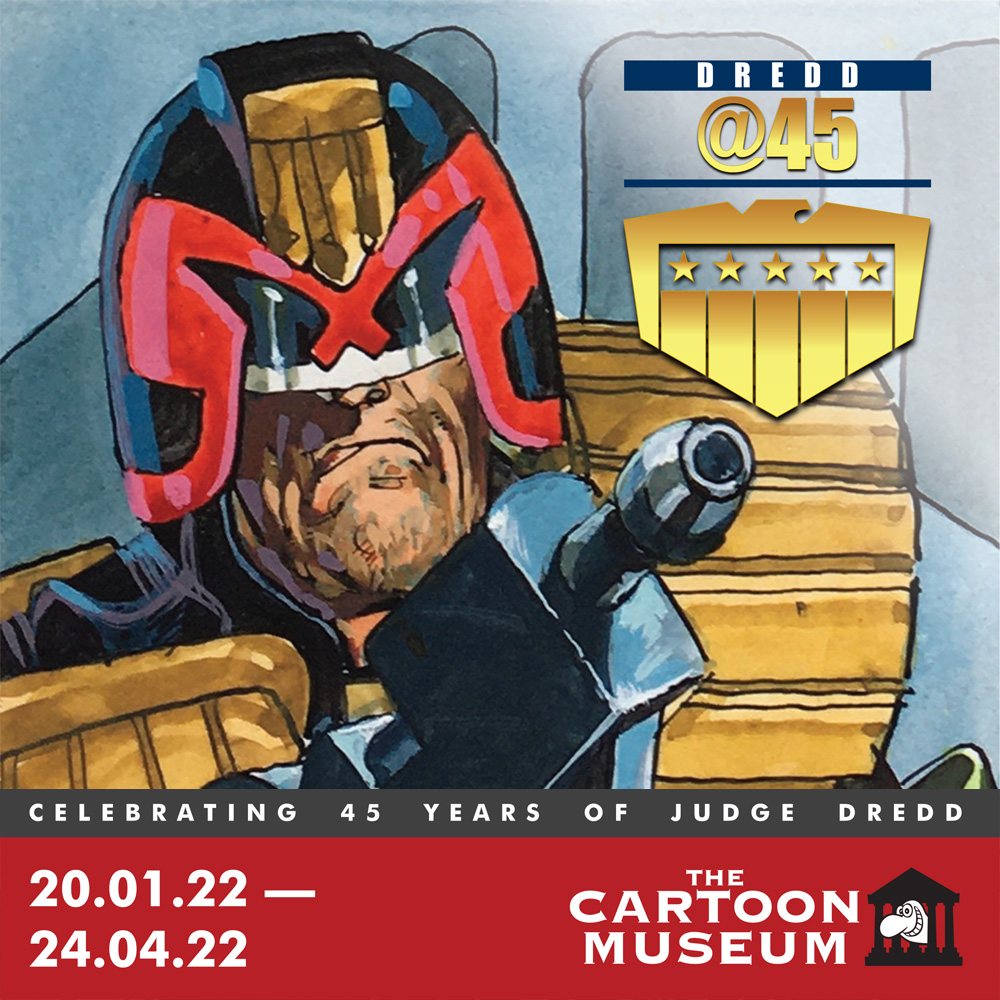 The Cartoon Museum unveils a special exhibition to celebrate the 45th Anniversary of Judge Dredd and 2000 AD. The exhibition explores Judge Dredd, one of the world’s most recognisable comic book characters but one that has been reinterpreted by countless artists over 45 years.

Created by writer John Wagner and artist Carlos Ezquerra, Judge Dredd is the longest-running 2000 AD character, first appearing in its second issue in 1977.

About Dredd @ 45: Dredd @ 45 is an ‘In Focus’ exhibition that takes a look at the evolution of Judge Dredd since 1977, and how artistic techniques have changed alongside the character. Dredd has kept the same look throughout, giving an amazing insight into the contrasting styles and techniques of the different artists who have worked on the strip over the past 45 years. In 2022, many of the tools that artists use would have been considered sci-fi by the readers of Dredd in 1977!

From the physical, cut-and-stick techniques utilized in the 1970s, to the crisp lines of the 1980s and the acetate overlays and detailed inking of the 1990s, to the introduction of digital techniques in the 2000s, Judge Dredd has stood steadfast as the world of comic creation has changed around him. Dredd is always different, but always the same.

Dredd @ 45 is included in the museum ticket price, and tickets are available online from cartoonmuseum.org.

Joe Sullivan, Director of The Cartoon Museum says: “We are excited to showcase one of the most iconic British comic characters of all time, charting how the art of Judge Dredd has changed constantly since he first appeared in Prog 2, but how the Judge himself has always stayed the same as he has passed through the pencils of countless incredible artists.

“This exhibition gives a window back in time to see how comic art has changed since Dredd first appeared – undoubtedly many digital tools used regularly by artists now could have easily featured in the pages of a 1970s copy of 2000 AD as ‘sci-fi tech’!

“Working with Rebellion has been a pleasure, and we are thrilled to be part of 2000 AD’s 45th anniversary celebrations.”

Jason Kingsley OBE, CEO of Rebellion, said:  “It’s been thrilling to see this exhibition come together for our special anniversary year. As custodians of 2000 AD for more than two decades, we’re excited to see the Cartoon Museum focus on Judge Dredd and the artists who have made him come alive for millions of readers over the past forty-five years. Such a showcase will be great opportunity for people to see how such an iconic character has been interpreted over the years but has always remained true to its core identity and look.”

About The Cartoon Museum
The Cartoon Museum champions cartoon and comic art, highlighting its importance to culture and society. Since 2006 it has received 420k visitors, and built a nationally important collection of 4,300 cartoons, comics and caricatures, and a library of 18k items. It runs a well-attended school programme and sell-out school holiday workshops, and over 50k children and adults have attended cartooning, comics and animation workshops at the museum.

About 2000 AD
First published in 1977, 2000 AD has been at the cutting edge of British culture for four decades and continues to publish ground-breaking science fiction, fantasy, and horror. Satirical, anti-establishment, and hyper-violent, 2000 AD has also fostered generations of the biggest names in comics, from Alan Moore to Mark Millar, from Brian Bolland to Jock. With its monthly stablemate, the Judge Dredd Megazine, 2000 AD continues to publish some of the most innovative, gripping, and Thrill-powered comics in the known universe.

About Rebellion
Founded in 1992, Rebellion is one of Europe’s biggest independent studios. Its flagship Sniper Elite series is renowned for its authentic stealth and sniping gameplay with more than 30 million players worldwide. 2000 AD is synonymous with the absolute finest in British comic book art. With the acquisition of a $100m film studio and the world’s largest archive of English language comics, Rebellion continues to grow from strength to strength.

Rebellion now operates across books, comics, TV and film, but at its core it’s still a leading developer and publisher of games. Whether it’s the breathtaking intensity of Sniper Elite 4, the face-hugging terror of Aliens vs. Predator or the grindhouse frenzy of the Zombie Army series, the Oxford-based studio is revered for creating stand-out games designed to thrill.