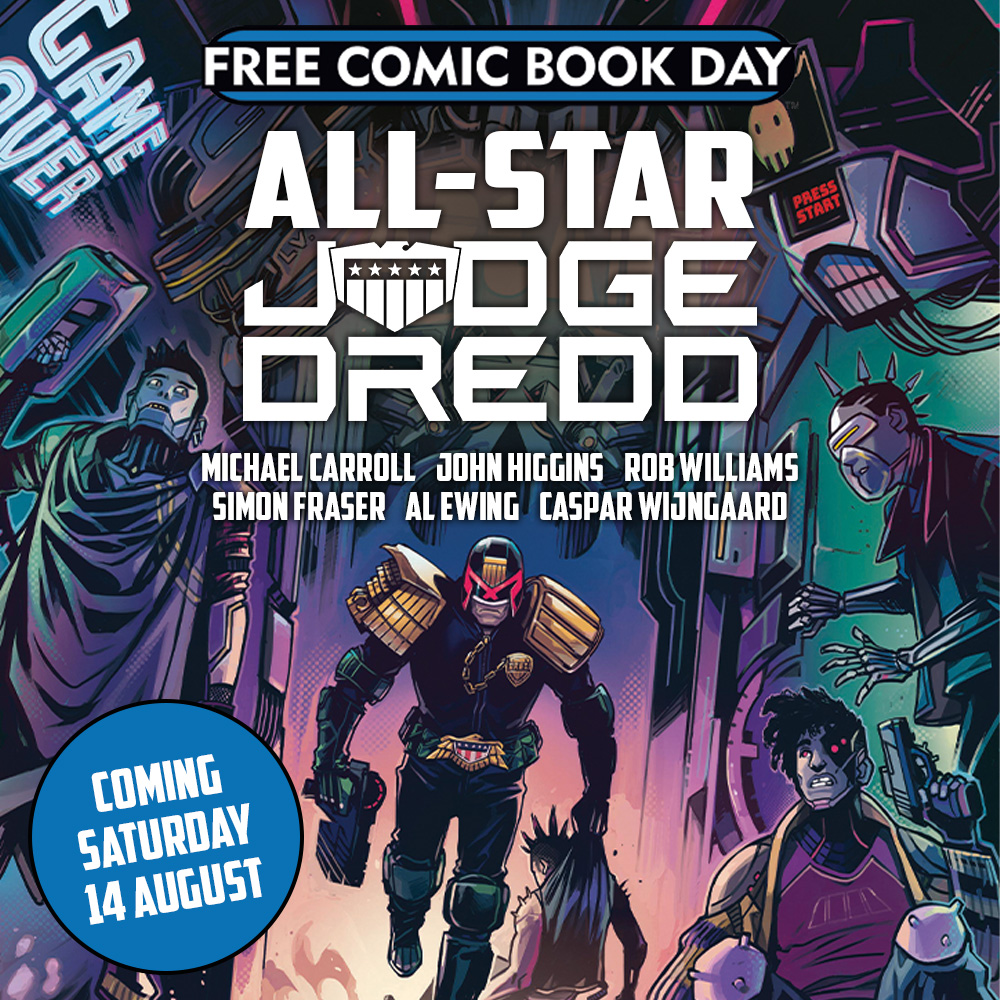 2000 AD Presents All Star Judge Dredd will be a full colour 32-page issue dedicated to stories from the universe of the iconic future lawman Judge Dredd, with big name creators and previews of this autumn’s hottest graphic novels.

The order period for FCBD titles ends on 30 April. This issue will ONLY be available from participating comic book stores, so make sure you tell your local comic book retailer to order enough copies of 2000 AD Presents All Star Judge Dredd so that you don’t miss out!

This issue will kick off with a bone-rattling all new stand-alone Dredd caper from superstar writer Al Ewing (Immortal Hulk) and artist Caspar Wijngaard (Star Wars) – and you can check out the first few pages of this brand new story below!

Witness the birth of the world of Judge Dredd in an incendiary preview of upcoming prequel graphic novel Dreadnoughts by Michael Carroll, with art by Watchmen’s John Higgins.

And fan-favourite character Judge Hershey leaves Mega-City One and travels to the ends of the earth to dispense her own brand of justice in long-anticipated blockbuster spin-off, Hershey: Disease by Rob Williams (Suicide Squad) and Simon Fraser (Doctor Who).

Rather than the usual date in May, this year’s FCBD will take place on Saturday 14 August 14. The event has been moved in the hope that much of the disruption related to COVID-19 will have passed.

For more information about Free Comic Book Day, and to check whether your local store is participating, click here! 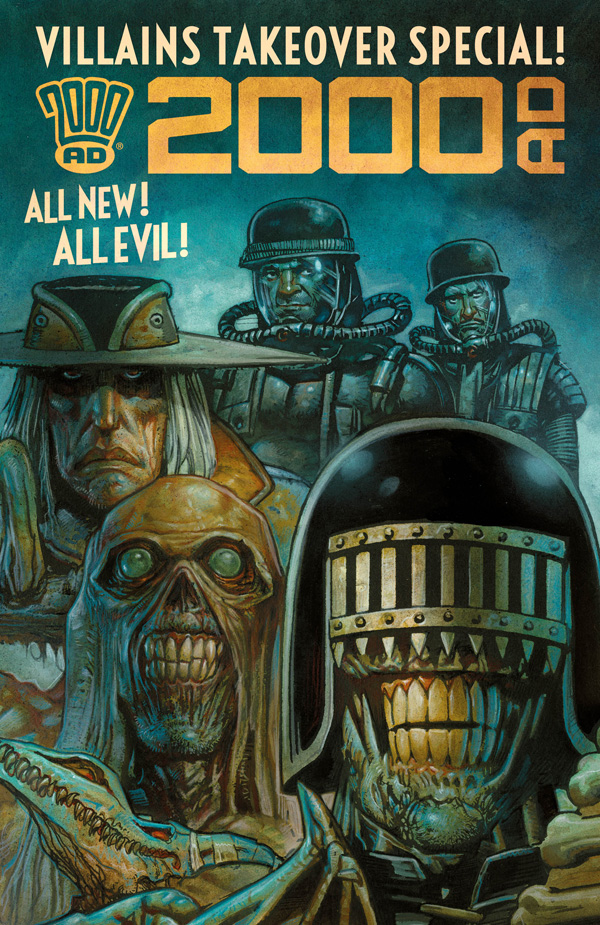 In time for Free Comic Book Day, the bad guys take over the Galaxy’s Greatest Comic with a nefarious new special full of criminal capers and villainous ventures – the 2000 AD Villains Takeover Special!

To complement Rebellion’s just-announced FCBD title, The Treasury of British Comics Presents Funny Pages, the 2000 AD Villains Takeover Special sees the baddies from some of the 2000 AD’s biggest strips, including Judge Dredd, Strontium Dog, and Sláine, get their moment in the spotlight – all for the low price of just 99p/99c.

Published to coincide with Free Comic Book Day on 4th May 2019, the 32-page US-format special will be on sale from comic book stores, this is the ideal shelf-stuffer to tempt roguish readers into the world of 2000 AD.

In this improper issue we have the very best forbidden felons and outlandish outlaws – the lawman of the future faces a familiar rictus grin in JUDGE DEATH: THE JUDGE WHO LAUGHS by Rob Williams and Henrik Sahlstrom, and there’s fiendish fantasy with LORD WEIRD SLOUGH FEG: LORD OF THE HUNT by Pat Mills and Kyle Hotz.

There’s chem-wreathed criminality in the world of Rogue Trooper in BRASS AND BLAND: THE PROFESSIONALS by Karl Stock and Kael Ngu while malefactory mutant-bountyhunters-turned-bad-guys, The Stix, from Strontium Dog cause trouble in STIX: SLEEPING DOGS LIE by Matt Smith and Chris Weston.

And this issue is all rounded off by TERROR TALE: LAST OF THE HELLPHIBIANS by that master of the mendacious Henry Flint!

The 2000 AD Villains Takeover Special will be on sale from 1st May and is available for comic book stores to order in time for Free Comic Book Day from Diamond Distribution using code JAN192056. 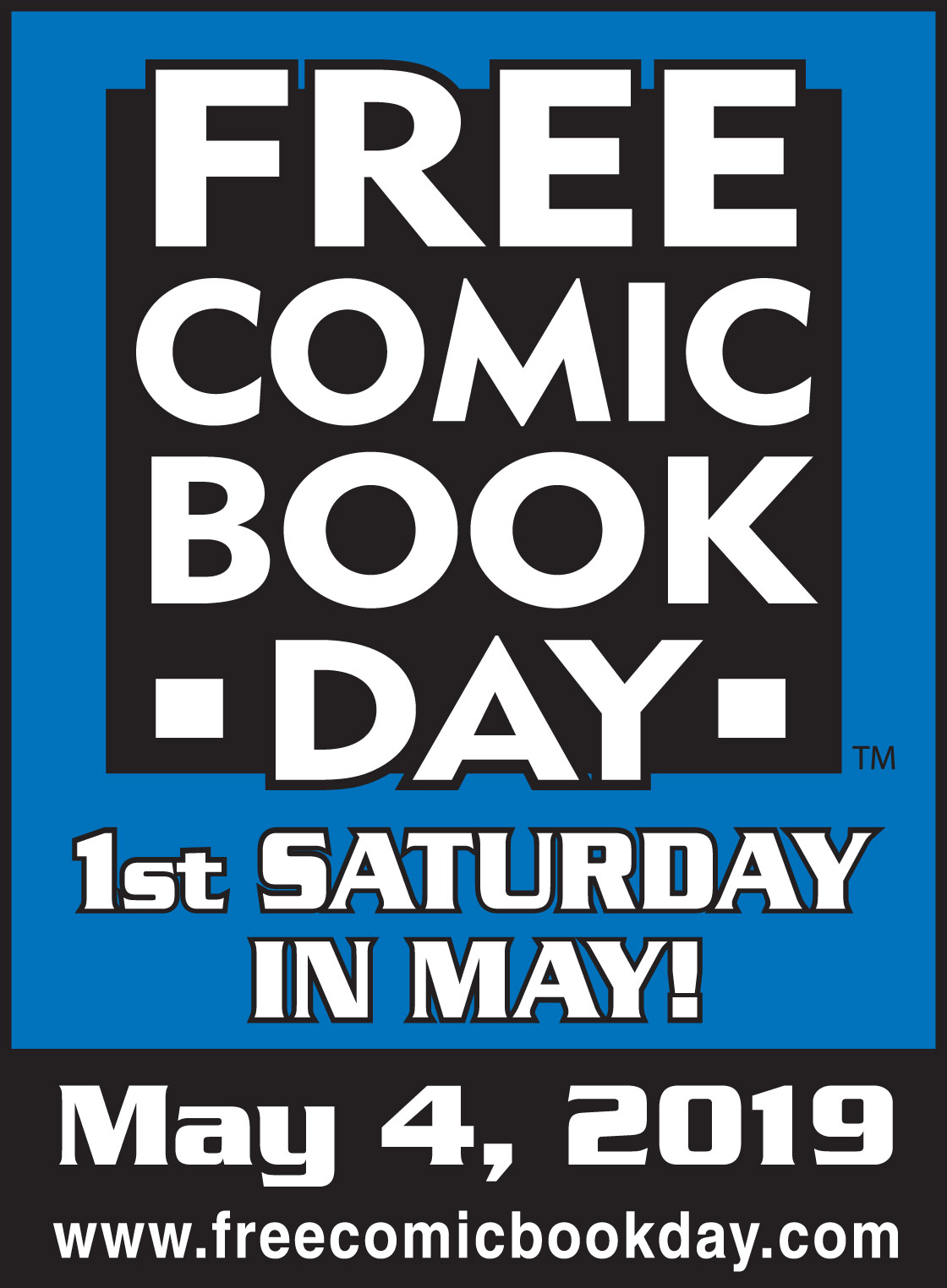 The Treasury of British Comics Presents Funny Pages is a stack of silliness in a folio of frivolous foolishness for FCBD 2019! This bounty of belly-laughs for kids of all ages sees the return of some of the most fondly remembered comic characters in British history!

The 32-page US-format comic will be available only from participating comic book stores on Free Comic Book Day 4th May 2019.

Free Comic Book Day takes place on the first Saturday of May and is an international event to help bring new readers into independent comic book stores.

Infant delinquent Sweeney Toddler commits crimes from the crib! Just when you thought it was safe to parody Steven Spielberg shark films – along comes the terror from the depths, GUMS! Meanwhile, Martha’s Monster Make-Up and Faceache strips are both a scream!

The egg-straordinary adventures of super-zeroes Birdman and Chicken are sure to get you clucking, and you can count on Deadley Hedley The Vampire Detective to be up to your neck in laughs when he joins a stake-out at a monster Christmas Party!

Not just that – but a loopy lagoon of laughs including Kid Kong, Grimly Feendish, Prambo, X-Ray Specs, Ivor Lott and Tony Broke, and Glugg!

This first ever Treasury of British Comics FCBD issue features reprints of well-loved classic series – an IDEAL FCBD title that will appeal to both kids and those adults who love these characters from their own childhoods!

Don’t be a lazy bones – hit your LCS for Free Comic Book Day 2019 and find your funny bone! 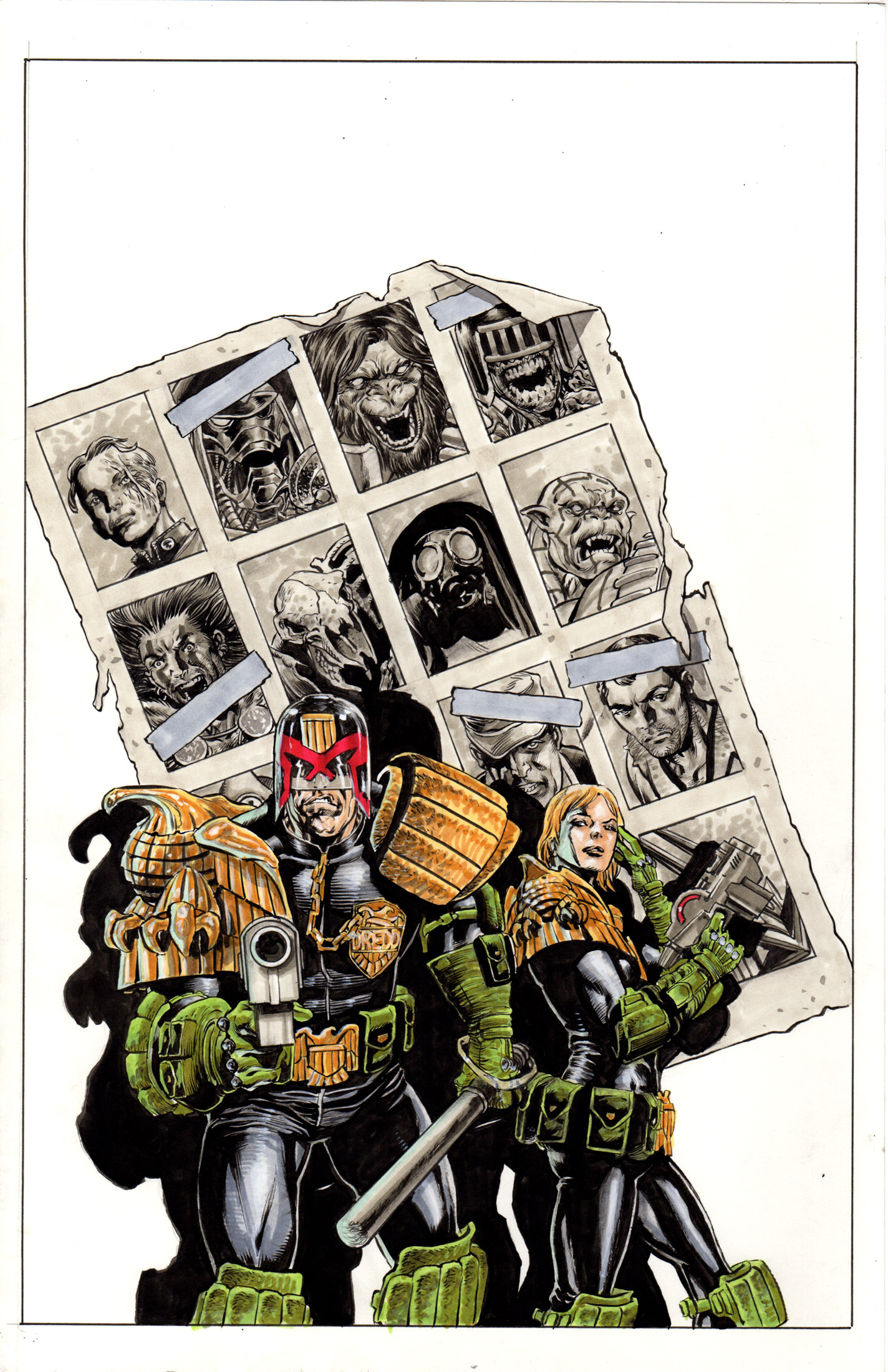 Saturday 6th May is Free Comic Book Day and once again, Tharg the Mighty has ordered his droids to put together a free prog that is absolutely throbbing with Thrillpower! The Prog contains a brand new Judge Dredd tale by Matt Smith and Phil Winslade, a treacherous Blackblood romp by Pat Mills and Kei Zama and Dan Abnett and DaNi bring us a berand new Judge Anderson Strip featuring a classic MegaCity villain! Add Kek-W and Dave Kendall’s Deadworld to the mix and a dash of Guy Adams and Jimmy Broxton’s Hope and you’ve got a series risk of Thrillpower Overload!

There are few artist’s with the chops to do justice such a Scrotnig package. Enter, the legend who is Mike Perkins! Mike first appeared in the Galaxy’s Greatest twenty four years ago and has since worked on fan favourites such as Carver Hale, Tharg’s Future Shocks and Vector 13.

Mike was kind enough to send us his cover process for the issue. Over to Mike…

“My brief for this cover was “Something along the lines of X-Men : Days of Future Past – perhaps with progs in the background” I opted to put some of the characters featured in the Free Comic Book Day prog in the background (it gave me the excuse to draw Tapper Hag – C’MON!!) accompanied by some of my favourites!”

Below is Mike’s glorious rough…

Mike risks a Rigellion Hotshot by putting Tharg on the wall of shame!

“Initially we decided to put various progs in the background to emphasize the history of the comic and I provided 3 versions – a faded background, a full colour background and, my preference, the black and white background…”

The PWLS droid suffers thrillpower overload at the sight of so many covers!

Dredd and Anderson in desperate need of some comic storage boxes.

“I also provided the artwork without the background there at all as I felt it was becoming a little too busy – especially when adding the text. Tharg – in his divine beneficence – decide to opt for this one and added the solid yellow behind in order for it to “pop” off the shelves…”

And pop it does! Mike has provided a fantastic cover for an excellent prog! In closing, an ecstatic Mike said “After all these years – my first 2000ad cover! May there be many more!!!” With a cover of this quality, I completely agree!

A huge, huge thanks to Mike for sending the images, they’re brilliant! Be sure to check out more of his work on his official site at http://www.mikeperkinsart.com/

Be sure to pick up your free Comic Book Day Prog this Saturday Earthlets! 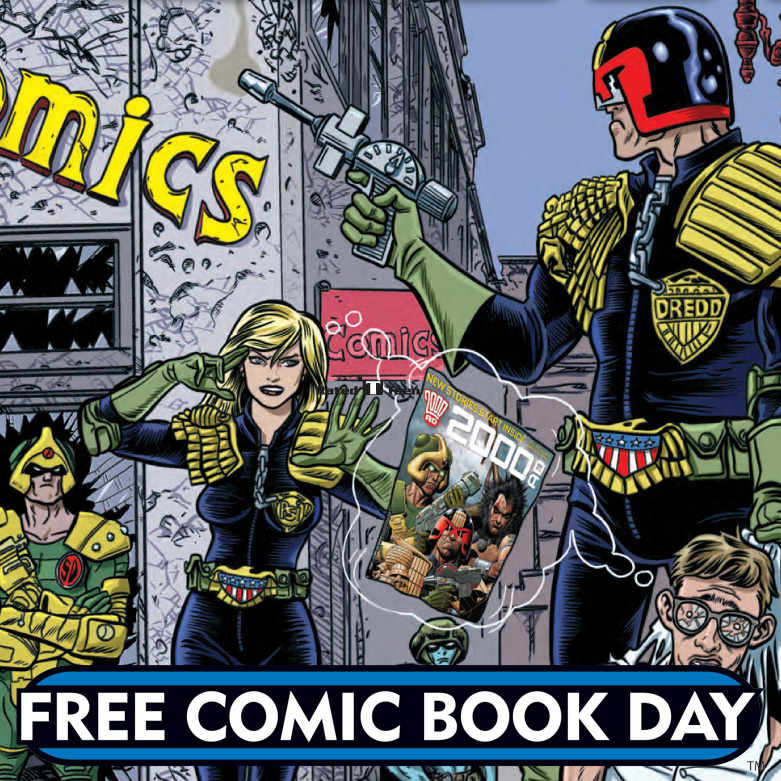 Free Comic Book Day is this Saturday (7 May) so make sure you pop along to your participating comics store and pick up the 2000 AD FCBD Prog — 48 pages, utterly zarjaz, and completely gratis!

And to celebrate Free Comic Book Day 2016, Orbital Comics is hosting its biggest and most ambitious FCBD signing EVER – a 2000 AD mega-signing session with Hannah Berry, Peter Milligan, Henry Flint, Alec Worley, Matt ‘Tharg’ Smith, and special guest Dani (who’s flying in from Greece for the day!). PLUS the store will have original art from the issue on display in the Orbital Gallery! Doors open at 10.30am for Free Comic Book Day, then the signing will commence at 2pm.