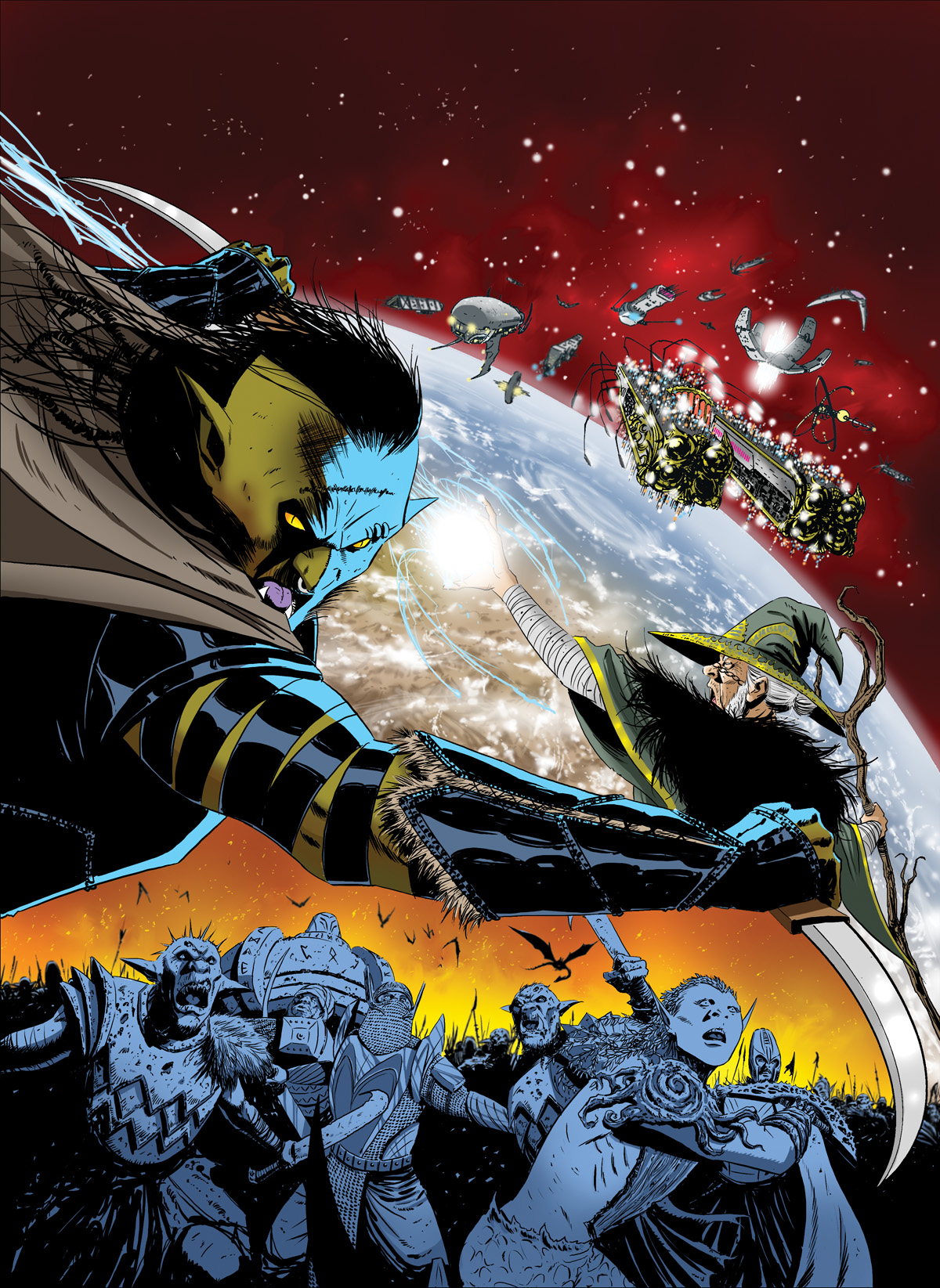 The bumper end of year Prog 2011 saw the debut of new strip Kingmaker by the dream team of Ian Edginton and Leigh Gallagher. This fantasy/Sci-fi mash upis become an instant hit with the readers, thanks to a hilarious script and stunning visuals by two top creators. Kingmaker follows the struggle of white wizard Ablard and his unlikely orc companion Crixus as they battle against an invading alien race known as The Thorn!

Leigh made an excellent video for the Mighty One’s zarjaz new “From the Drawingboard” series which you can follow on Youtube. You find it here.

However, Leigh was kind enough to send his files to 2000 AD Covers Uncovered too. He said “Even though this was a cover for part 5 of Kingmaker, with it being our first, I wanted to make it an introduction to the aliens versus Middle Earth concept by Ian Edginton and myself.”

Below are Leigh’s approved roughs…

Leigh continues “As you know this cover process was recorded for the ‘From The Drawing Board’ video series on Youtube. The thing is, that video was actually my second attempt, as seconds before I was about to send 2000 AD the original video, I made the mistake of showing it to my wife. Upon viewing the opening minutes, she had her mouth covered in utter horror and disbelief and told me that I can’t show that to anyone!”

“It may have been the extended screen time given to the “PJ Holden doll”,or the highly amusing banter to the camera, or the video cutting to me eating a mince pie for 30 seconds in the middle of the montage, or it may have been that after I added “Playgirl centrefold model” to my list of credits I had a half naked photo of me flash up on screen for half a second…. we’ll never know….”

“In any case, I went in a mood for half a day, then redid the opening of the video to what you see now. Hope you like it!” We certainly do Leigh, though I for one would be keen to see that mince pie montage…

Next we have Leigh’s “fairly loose” pencils, as he will be inking the cover himself…

The pencils are scanned then inked on Leigh’s fancy new Ugee drawing tablet. Previously, he’d have used more traditional methods however, as he was recording for Tharg, he went the digital route…

Orc-estral Maneuvres in the Dark Ages.

With the image inked, it was time to digitally colour it to really make the cover pop!

Middle Earth sized thank you’s to the beautiful Mr Gallagher for sending the images. Please be sure to check out his work at http://leighgallagherart.blogspot.co.uk/