Beneath all that glorious cross hatching is one seriously cross law man! A conflicted Judge Dredd must take down a rag tag squad of ex-judges who heroically helped him save the city in it’s darkest hour. In hot persuit of the desperate War Buds as they attempt to save the tortured Med-Judge Costa from the Euthanasiam, Dredd is forced to confront demons from his own past. Are the War Buds simply taking the same course of action he himself has?

Veteran design droid from the House of Tharg, Luke Preece, has provided an outstanding cover which hammers home all the urgency, conflict and determination from this modern classic of a story.

Below, see see Luke’s awesome digital rough. As ever, he has used his trademark “Dredd did a Thing… It’s really awesome!” placeholder text, which is somewhat at odds to the actual story within!

If by awesome, you mean hunting down a group of eldsters who helped save your city, then yeah!

With the rough completed and approved by Old Green Bonce, Luke meticulously pencils the cover using nothing more than a steady hand, a pencil and six cans of Castrol XXXX.

Next Luke begins to ink the image with his trusty Pigma Micron pens!

And here are those stunning, completed inks. If you love them as much as I do, then be sure to visit Vice Press’ zarjaz erm… Zarjaz Exhibition in Leeds throughout September where you can see those inks up close and personal like!

With the inks complete, it’s time to fire up the trusty Wacom and colour this bad boy! Luke made a really cool video, charting his progress with the cover, check it out HERE.

And here is the incredible, finished cover, an absolute classic!

Think Bike (for your safety, not his!)

Huge, huge thanks to Luke for sending the files, this is truly one of my very favourite covers of the year. The rendering style is incredible and shows just why Luke’s prints are so popular. Remeber to check out more of Luke’s work HERE. 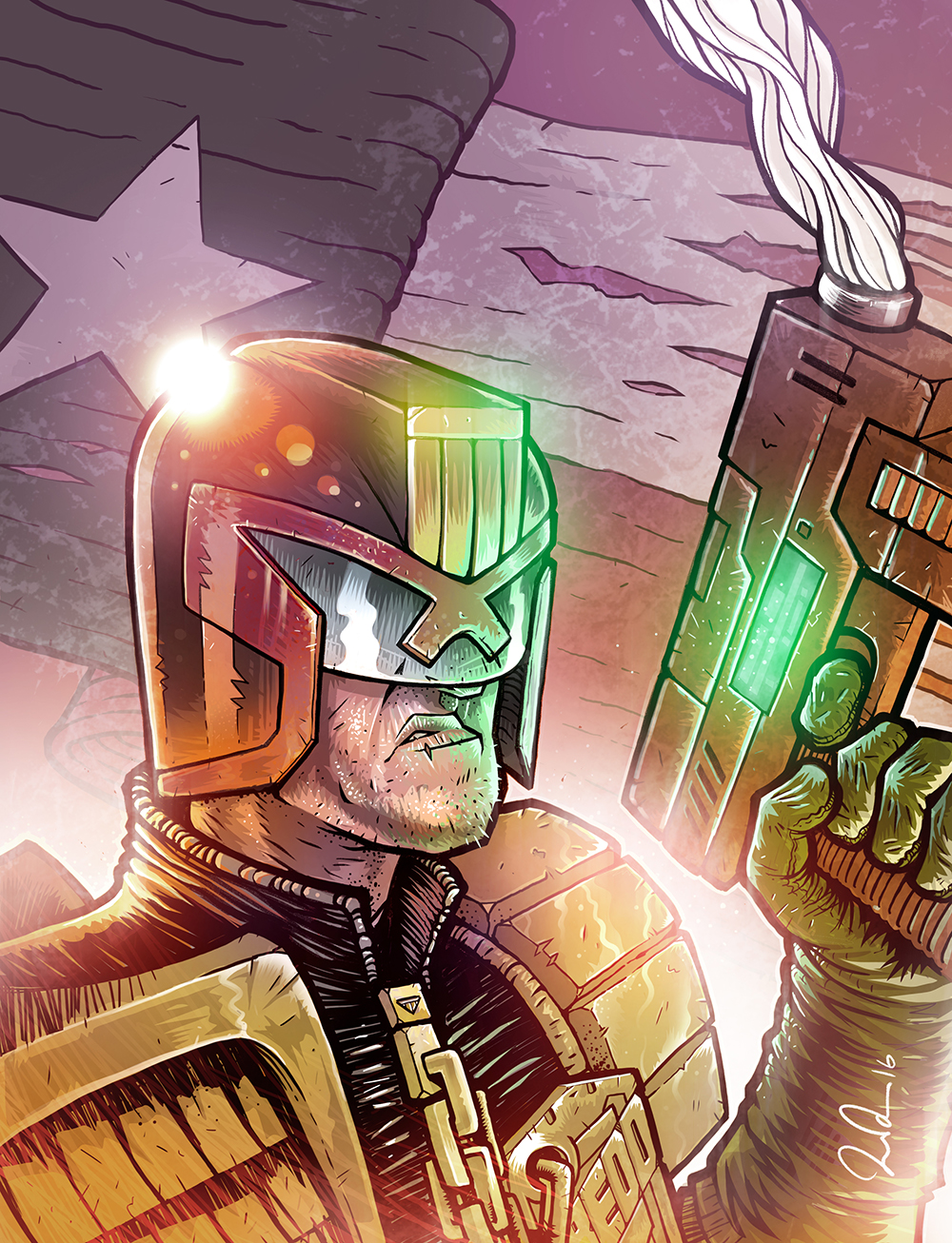 After the recent, ahem, regime change in Texas City, there is suddenly a new spirit of cooperation between the Big Meg and the Lone Star State. New Dredd tale ‘Deep in the Heart’ by Mike Carrol and Tiernen Trevallion sees Dredd and his fellow judges ventre to Texas City on the hunt for a mysterious fugitive. Who has Dredd got in his sights and just how much chaos will he cause to get his perp?

Veteran design droid Luke Preece was drafted in to create a hard hitting cover for this new and exciting arc. Though Luke’s first prog cover, he has had many years’ experience working as a design droid for the House of Tharg. Designing such iconic beauties as this…

Over to Luke to tell us more about the creation of the first, absolutely zarjaz cover of 2017!

“Tharg explained that Dredd would be spending some time in Texas. He’d like something incorporating the lone-star flag and Dredd on the cover. Maybe just his helmet or his badge even, but he was happy to see what I could come up with. He was quite open to my ideas on this which was nice. Most of the work I had done previously for 2000 AD over the years had been design based so, whilst this was an exciting task, it was also slightly intimidating! Dredd ain’t easy to draw and 2000 AD house alot of amazing artists.”

“I decided to keep it quite simple. First I did some really quick black and white roughs to get a feeling for the composition and pose…”

“Once these were done I emailed them through to Tharg. He liked the one with him holding his lawgiver but wanted me to turn his head to face the camera more. As requested, I made the amends and sent over a third rough…”

“This got approved and I then went to work. At this point I should point out that I decided to draw Dredd holding the lawgiver from the Dredd 3D movie… (credit to Jock’s design by the way). Not that I have anything against the other designs. They are all awesome! Basically, when putting my sketch together it’s just what came out so I went with it. Just thought ‘Drokk it, can’t hurt!’ “

Hmmm, I take it the Preece Droid’s Nerve Centre cubicle was nowhere near Mek-Quake’s lair…

“Once the cover art was complete. I did a quick mockup with some placeholder cover lines and the 2000 AD strap logo. I worked on the design side of the prog for around 9 years with Pye Parr and Tharg so it was almost a strange experience laying out this stuff on top of my own artwork.”

For some reason during his time as a design droid, Luke was never asked to come up with the taglines…

Luke continues “All in all, I’m pleased with the results and hope that readers like my take on such an iconic character. Hopefully, more to come in the future!”

I can’t agree more, the cover is a glorious start to 2017 and Luke’s distinctive style is awesome! Point you browser to Luke’s website at http://www.lukepreece.com/ to see more of his amazing work, he’s brilliant!

Massive thanks to Luke for sending the artwork and commentary!