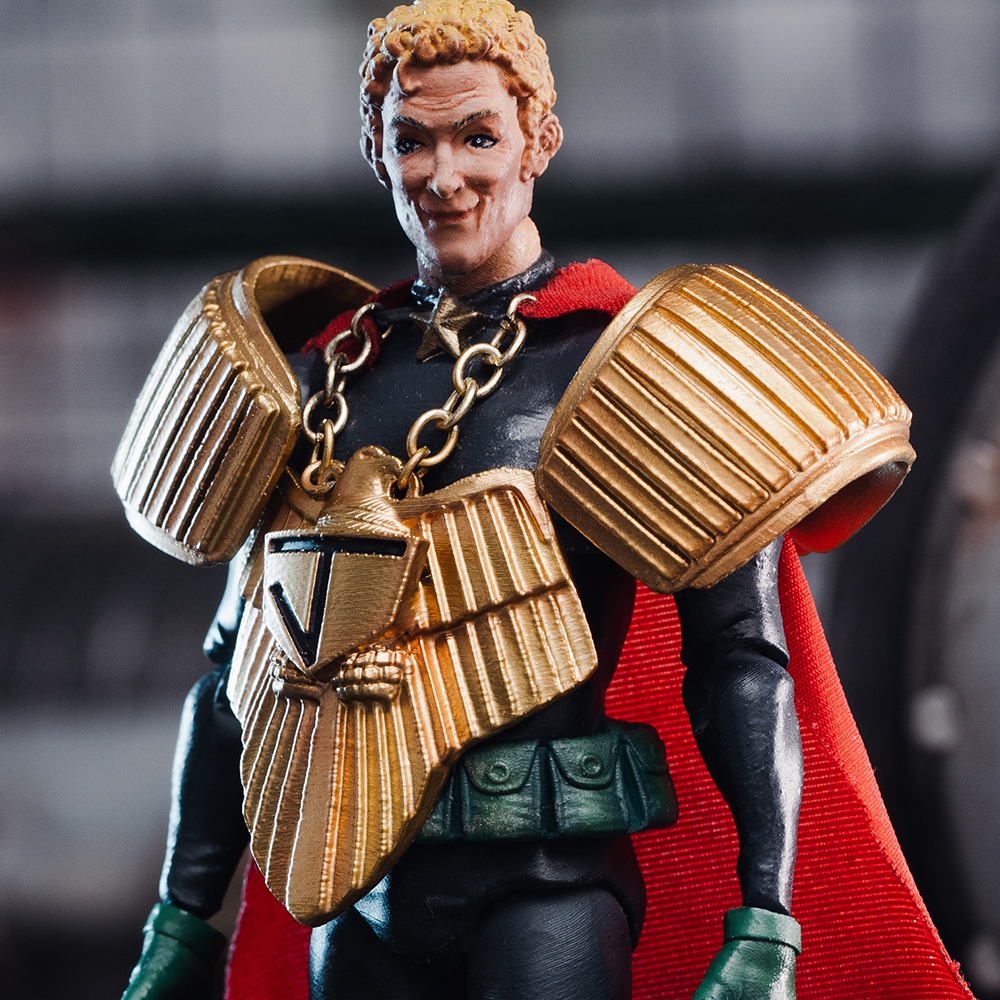 He’s the madman who appointed a goldfish as his deputy and sentenced an entire city to death for defying his megalomaniacal will – Chief Judge Caligula is the latest Judge Dredd figure to be announced by Hiya Toys!

Rebellion and Hiya Toys are proud to unveil the latest in the brand new range of 1:18 PVC action figures based on the world of Judge Dredd.

Cal was the head of the feared Special Judicial Squad, the Judges who judge the Judges! After staging a coup by framing Judge Dredd and assassinating the Chief Judge, Cal became increasingly despotic and erratic, hypnotising Judges to follow his orders, appointing a fish as his deputy, circling the entire city with a mile-high wall, sentencing the entire population to death, and using alien Klegg warriors to enforce his tyrannical rule. He was eventually defeated by Dredd, a ragtag band of renegade Judges and Academy of Law tutors, and Fergee – a giggling, fly-swarmed, baseball bat-swinging denizen of the Undercity!

Due for release in the fourth quarter of 2022, this poseable figure with 16 points of articulation is dressed in Cal’s Chief Judges’ uniform, including oversized torso shield and cape. He also comes with a scale model of Deputy Chief Judge Fish encased inside his ornately decorated goldfish bowl, and two swappable heads – one displaying the smug grin of a tyrant, the other an open-mouthed scowl about to deliver a cruel outburst that could easily condemn millions more to death!

Cal is the next in the brand new range of fully poseable 1:18 figures announced in November 2021, drawing on more than four decades of ground-breaking comic books set in the world of the classic character created by John Wagner and Carlos Ezquerra in 1977.

Due to pressure on international shipping caused by the pandemic dates, the shipping dates for the new range have had to be set back. The new expected shipping dates are as follows:

The 2000 AD action figures from Hiya Toys will be available to order from these retailers:

US and North America

For trade enquiries, the 2000 AD action figures from Hiya Toys will be available to order from these distributors: 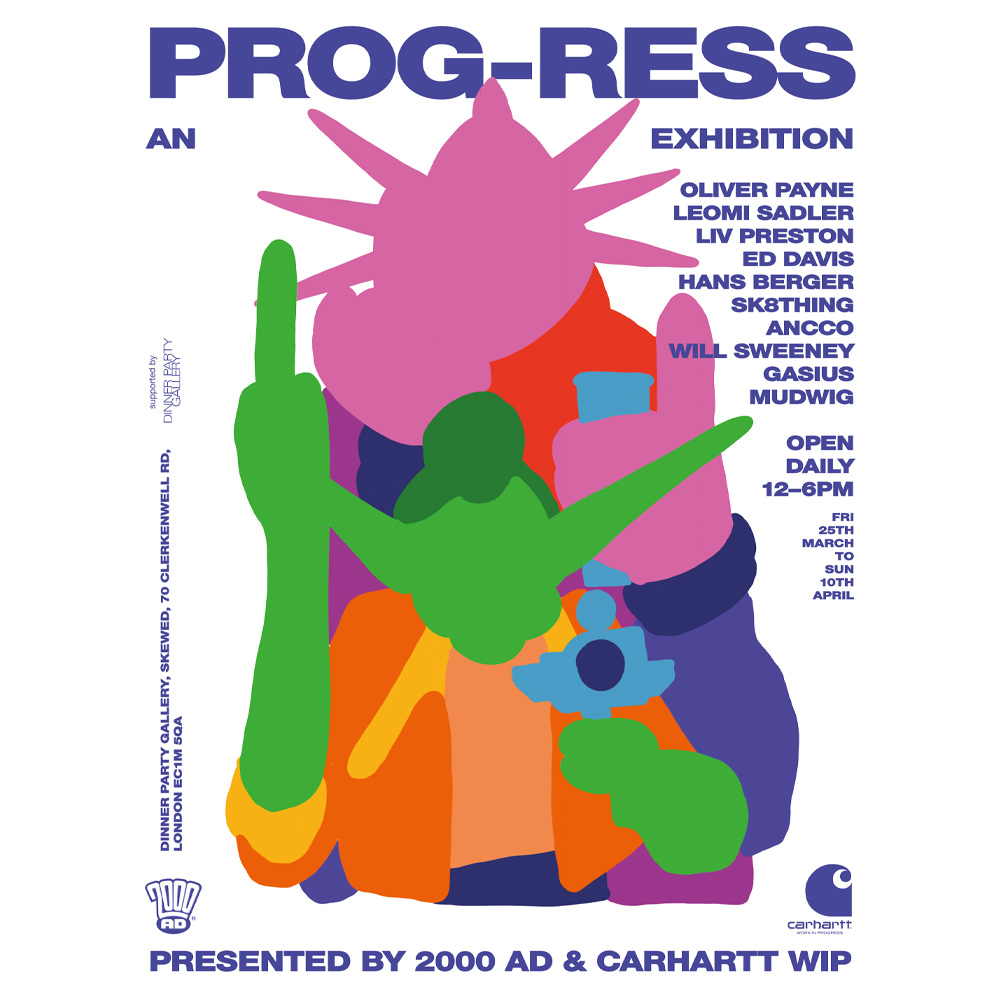 From abstractions of the work of Kevin O’Neill to a vision of life on The Hoop from Halo Jones, art inspired by the Galaxy’s Greatest Comic is due to open in London in late March.

Work by leading graphic artists inspired by 2000 AD’s legendary creators will feature in PROG-RESS, presented by 2000 AD and Carhartt WIP at the Dinner Party Gallery in London.

Originally conceived for Carhartt WIP’s biannual publication WIP magazine, the brand has invited various artists from its network of friends and collaborators to offer their own unique take on the 2000 AD universe. The exhibition will feature a variety of works and formats, including sculpture, painting, and video.

For many, the title was also their first exposure to some form of countercultural visual art. Since then, 2000 AD has inspired countless artists, both in spirit and form, some of whom are featured in this exhibition. The comic also continues to publish regularly today, both online and in print.

The exhibition will be open to the public from 12noon to 6pm daily, from Friday 25 March until Sunday 10 April at the ​​Dinner Party Galley, 70 Clerkenwell Rd, London EC1M 5QA 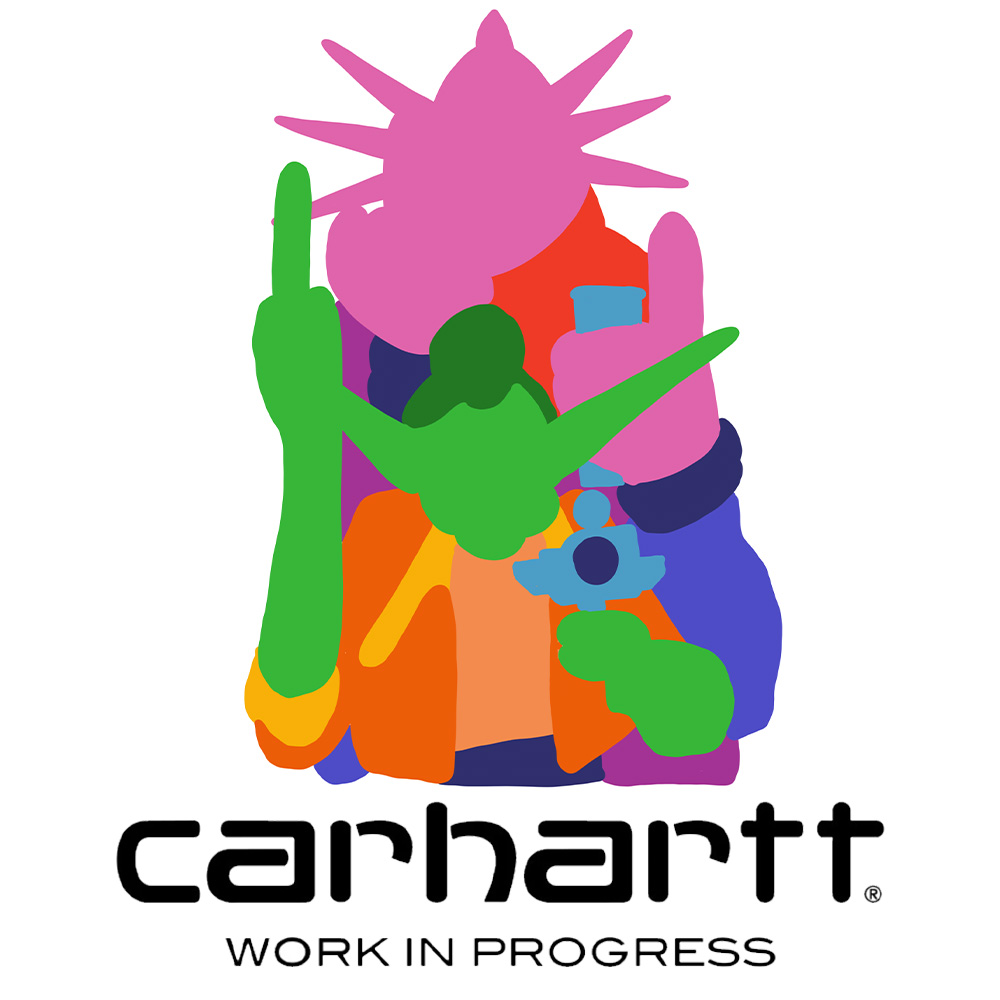 From abstractions of the work of Kevin O’Neill to a vision of life on The Hoop from Halo Jones, the new issue of WIP magazine is taking inspiration from the Galaxy’s Greatest Comic!

The latest issue of the cultural magazine features brand new tributes by leading graphic artists, inspired by 2000 AD and its galaxy of characters.

WIP is the biannual publication by Carhartt Work In Progress, which explores art, music, style, and culture through the brand’s unique lens.

2000 AD has long been a force in British culture, its influence felt far beyond comic books – from music to literature to art and even politics. And this autumn, WIP magazine’s fifth issue original artworks by the likes of Oliver Payne, Ed Davis, Leomi Sadler, Ancco, and Skatething, drawing on 2000 AD’s long history of unique artistic styles and subversive storytelling.

This issue of WIP magazine is now available from Carhartt WIP stores and select global retailers.

Established in 1994 by Edwin Faeh, Carhartt Work In Progress (WIP) develops its own collections based on original Carhartt workwear. The brand combines authentic adaptations of these robust American archetypes, while engaging with the subcultures that have embraced it. This, in turn, has seen Carhartt WIP place itself in a new context and bring forth its own classics. Carhartt WIP opened its first store in London in 1997 and today operates over 80 locations worldwide. It also has its own skate team and music department, while supporting a slew of artists and releasing various in-house publications.

WIP magazine is available now from these selected stores and retailers: