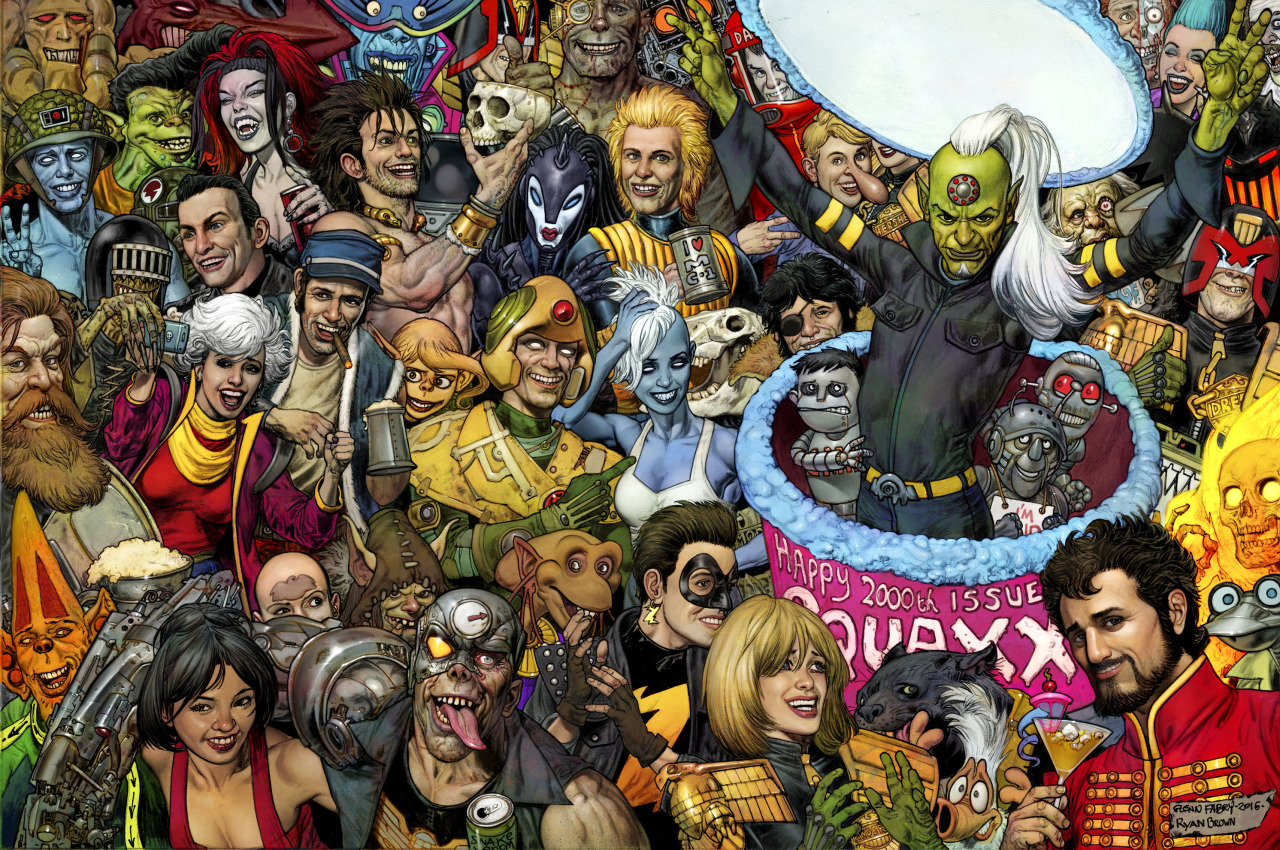 Paaaaaaaarty! A (very) rare moment of joviality in the Nerve Centre as Tharg allows his characters a break from destruction and mayhem to celebrate the momentous Prog 2000!

This Previews Exclusive cover was brought to you by the cover-miester himself, Mr Glenn Fabry and coloured by the brilliant Ryan Brown. Below we see Glenn’s rough sketch, eagle eyed readers will spot a cameo from Rhubarb, of Rhubarb and Custard fame…

With the layout approved, Glenn gets to work on his trademark, meticulous pencils. Not Glenn’s notes around the border for the more obscure characters…

With the beautiful pencils finished, it was over to art supremo Ryan Brown to colour. He said “It was really was fun to work on, though its hard working on other peoples pencil work as you need understand where all the light sources are coming from.” Below is a work in progress with many of the flats done…

Ryan continues “I really enjoyed coming up with all the textures, it’s just a pity I didn’t have more time to work on it!” Modest as ever with a truly Zarjaz cover worthy of such a momentous prog.

Poor Gronk never got over the shock…

Huuuuge thanks to Ryan for the images (check his website at http://ryanbrown-art.com/) and a hearty Congratulations to Tharg and the gang for 2000 Progs of Pure Thrillpower. Here’s to 2000 more! 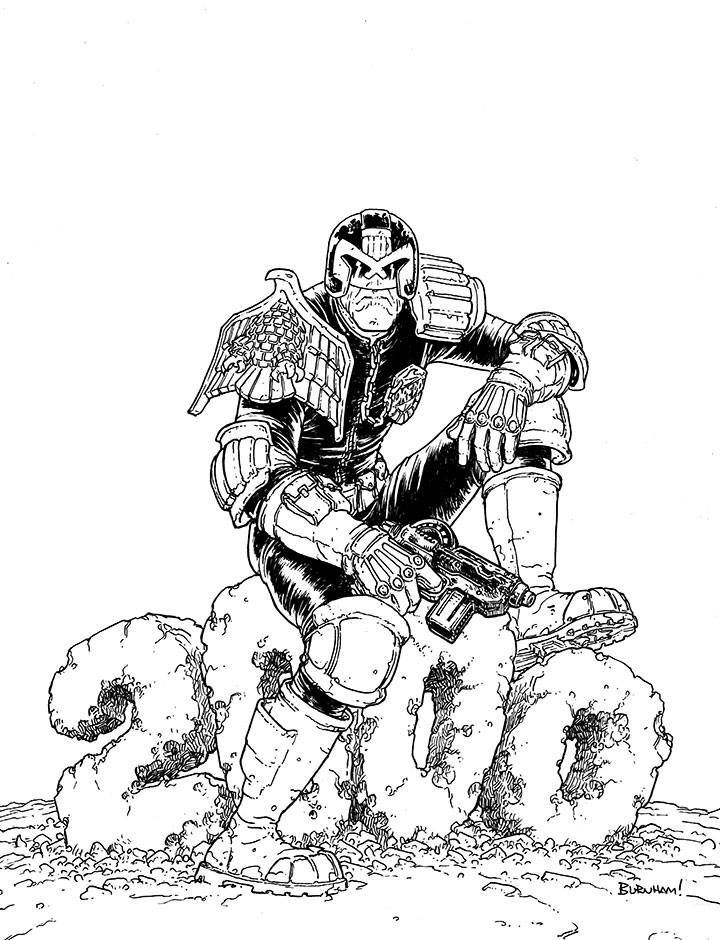 Prog 2000 is here with, count ’em, THREE scrotnig covers by some of the best artists in the galaxy! Tharg has commissioned some of the greatest artdroids ever assembled to celebrate this magnanimous event in zarjaz style!

The second of our thrillpowered covers comes from Superstar artist Chris Burnham, the artist behind such high profile comics as Nameless, Batman Inc. and, of course, the brilliant Officer Downe.

The cover is based on a (no pun intended) stone cold classic, Prog 168 by Mick McMahon. Here’s the lineart for that iconic cover…

No sir! But if you keep sitting there you’ll get terrible piles.

And the coloured version, which I assume was by the late, great Tom Frame…

Yes, how do you wash your hair if you never take your helmet off?

Chris was kind enough to send his roughs and linework for the image, below we have his thumbnail sketch…

Even from this rougher than rough thumbnail, you can make out Dredd’s scowl…

With Tharg’s approval, Chris begins to work on the image.

Those pencils are converted to blue line and inked…

And here are those finished inks, brilliant…

Sitting on the Prog of the Day.

With the inks laid down(e), they were sent to Nathan Fairbairn (Walking Dead, Justice League and Lake of Fire) for colouring. Pretty damned perfect if you ask me…

Red sky at night, Dredd has a fight!

And here’s how the prog looks on your shelf…

Huge thanks to Chris for sending the images! On Wednesday, Glenn Fabry and Ryan Brown bring us a 2000AD party! 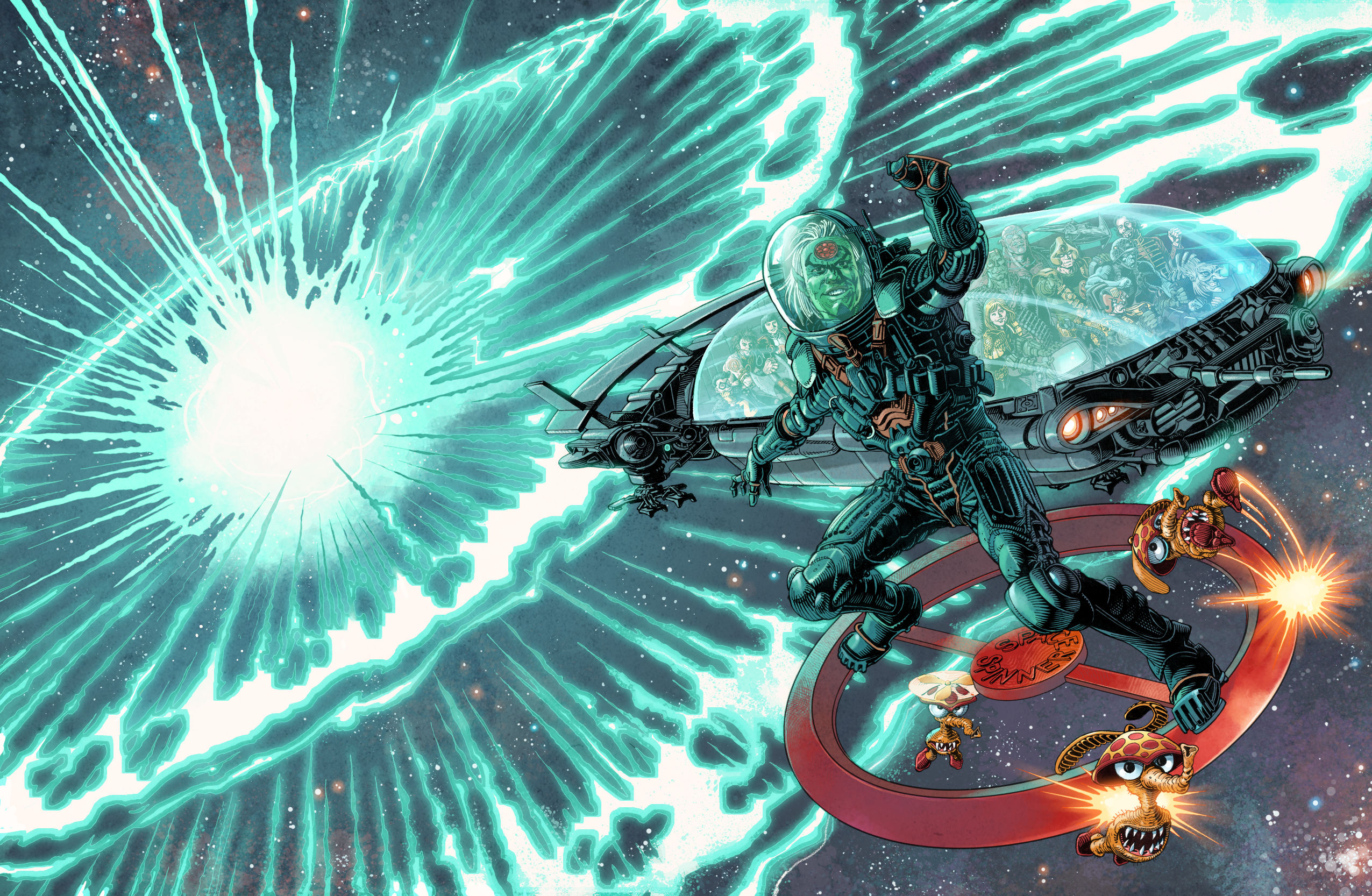 Prog 2000 is here with, count ’em, THREE scrotnig covers by some of the best artists in the galaxy! Tharg has commissioned some of the greatest artdroids ever assembled to celebrate this magnanimous event in zarjaz style! Obviously, if we’re talking about top quality cover artists, then we have to be talking about the wonderful Mr Cliff Robinson. As if producing a cover for the illustrious Prog 2000 wasn’t exciting enough, this is actually Cliff’s 100th Prog cover, making him the first artist to reach triple figures! Congratulations Cliff, here’s to 100 more!

Cliff told us how he created his centennial masterpiece, he said “Originally I had Tharg just holding onto the current Logo as it and everything else in the picture is being sucked into a black hole. Tharg suggested a star going ‘super nova’ instead of a black hole would be better and he also had the great idea of Tharg surfing on the ‘Space Spinner’.”

Below we see Cliff’s roughs…

With the composition decided, Cliff powers on. He continues “Tharg, the spaceship and the characters were all drawn separately and cobbled together on the computer.”

I love, love, love seeing Cliff take on other characters and he didn’t certainly disappoint below…

If Savage was here, would he have called Shotgun?

This is actually what a Rigellion Hotshot looks like.

“Oh, we’re all going on a, Summer Holiday! No more working for a, week or two!”

With all the elements prepared, it’s time for Cliff to assemble the ingredients into a tasty thrill powered cake. However, Cliff noticed a bit of a snag… “As Tharg was going to be holding the main 2000ad logo, I only drew his left hand thumb, figuring it was a waste of time drawing his other fingers when they’d be covered up once the Logo was added. So I was a bit surprised to see the cover appear on the 2000ad website minus all the Logo’s. I guess a small meteorite could have taken off Tharg’s fingers, but if so, would he be smiling so broadly? Of course that could be a symptom of hypoxia due to his space suit being compromised. If anyone should come across Tharg’s fingers, please return them to the Quaxxann lost & found office.”

And here’s the line art with those poor doomed logos…

Once the line art is complete, it’s over to Cliff’s partner in crime, the Brilliant Dylan Teague for colouring. As usual, he did a stunning job!

Huuuuuge thank you to Cliff for sending the images and brilliant commentary and congratulations again of his 100th glorious cover!!!

Next up – Chris Burnham and Nathan Fairbairn…