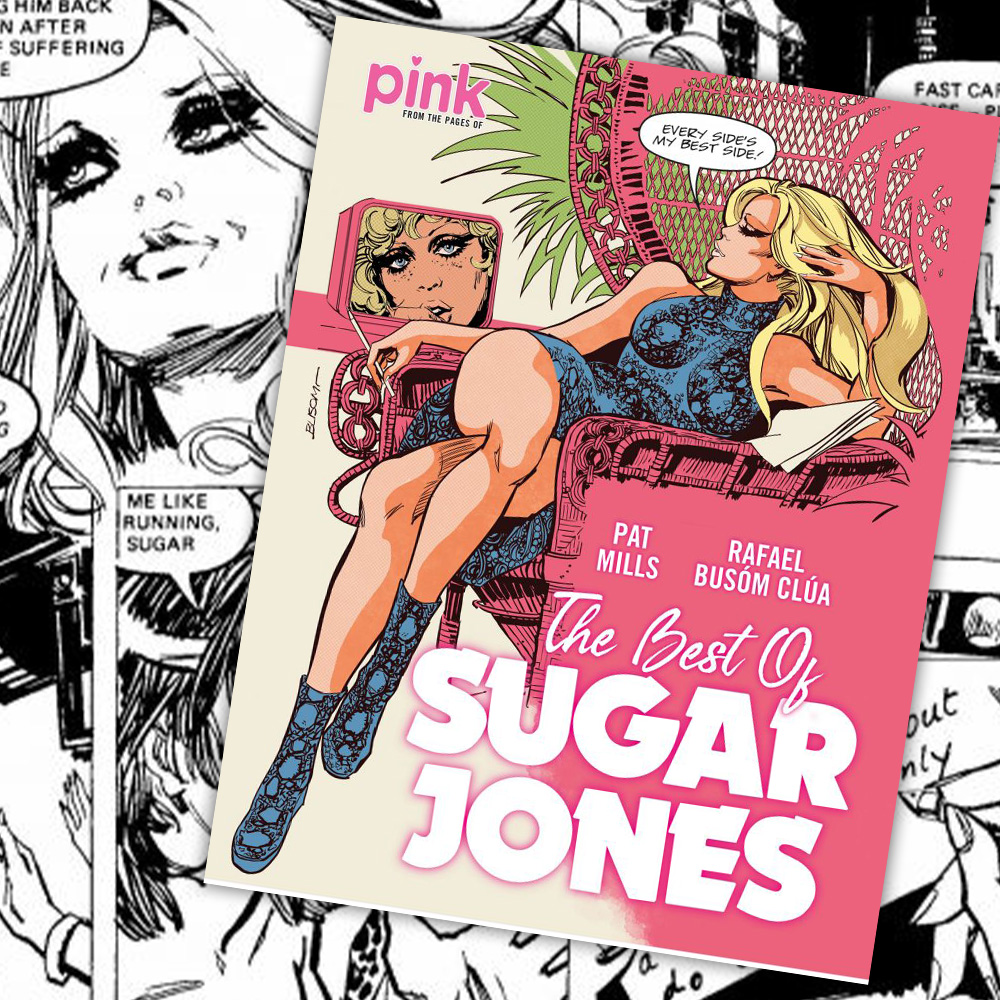 Sugar is seen by the world as a charming twenty-something host of her own late-night variety show, beloved by viewers up and down the nation.

Only her overworked and underappreciated assistant, Susie Ford, knows her secret – that Sugar is really a selfish, sour, old schemer who’ll do anything to look good on television! – and though Sugar’s own ambition and vanity frequently rebounds on her, Susie continues to do her best to protect Sugar.

The collection brings together the original stories from the pages of Pink. Enjoy Pat Mills’ needling of the trappings of fame alongside Rafael Busóm Clúa’s absolutely gorgeous artwork.

BUY FROM TREASURY OF BRITISH COMICS >> 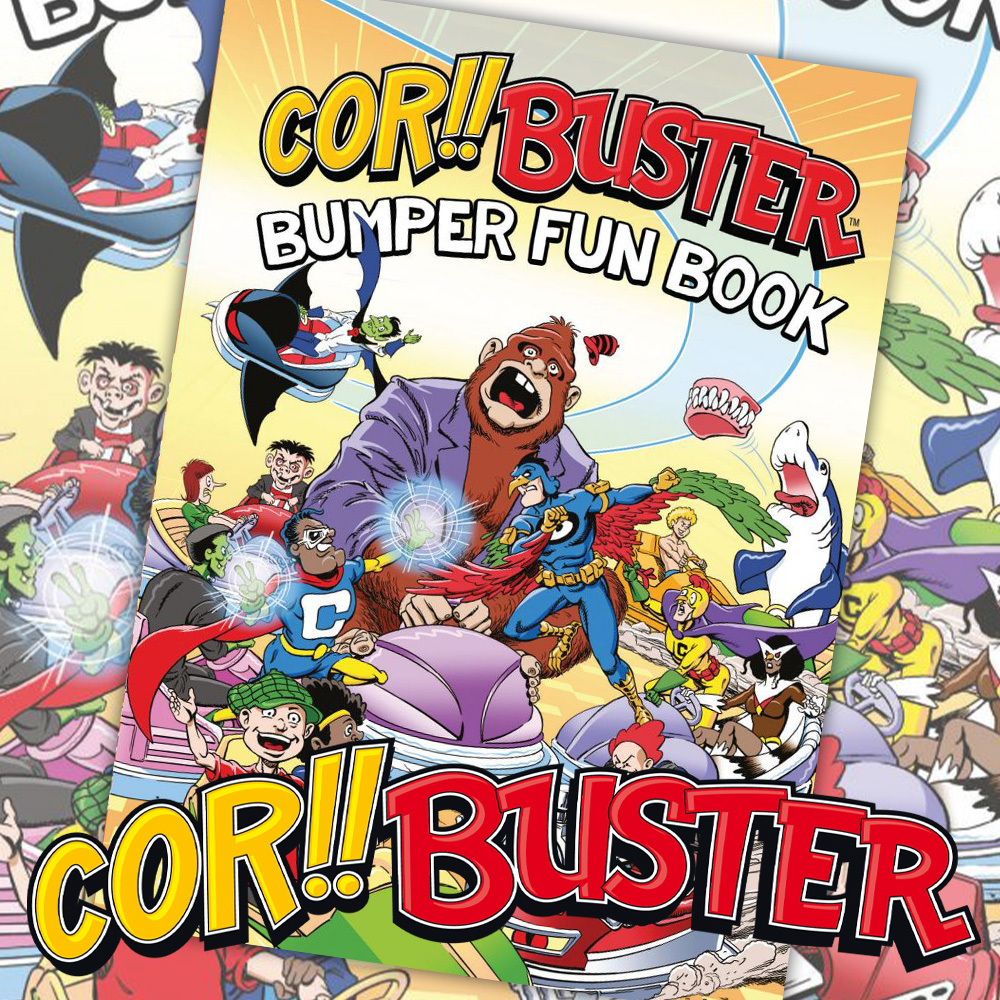 From naughty nippers and toothless sharks to crimefighting feather-brains and hapless horrors, get some stories to tickle everybody’s funnybone!

Don’t miss this bumper collection of comic book bone-ticklers, as well as activities and interviews with the creators behind the funny pages!

Available from all good book and comic book stores, as well as from the Treasury of British Comics webshop! Get it digitally from the webshop or the 2000 AD app!

BUY FROM THE TREASURY OF BRITISH COMICS >> 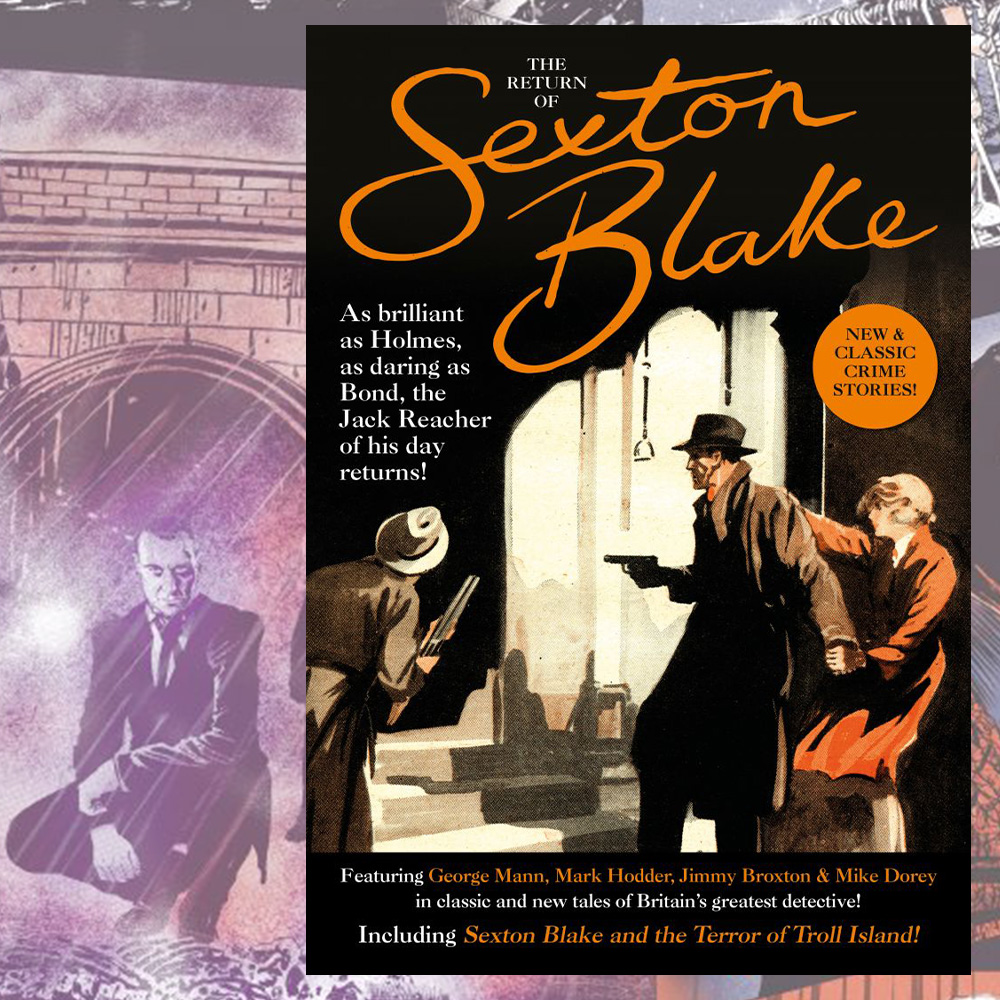 He’s as brilliant as Sherlock Holmes and as daring as James Bond- and The Return of Sexton Blake is out now!

Then the adventure detective is back in action as George Mann (Doctor Who, Star Wars Adventures) and Jimmy Broxton (Hope, Doctor Who) brings us the first new Sexton Blake comic in decades!

Created in 1893 – six years after rival Sherlock Holmes first appeared in print – Sexton Blake went on to become a publishing phenomenon, appearing in 4,000 stories told written and drawn by over 200 different writers and artists and syndicated around the world. And now he is reborn! 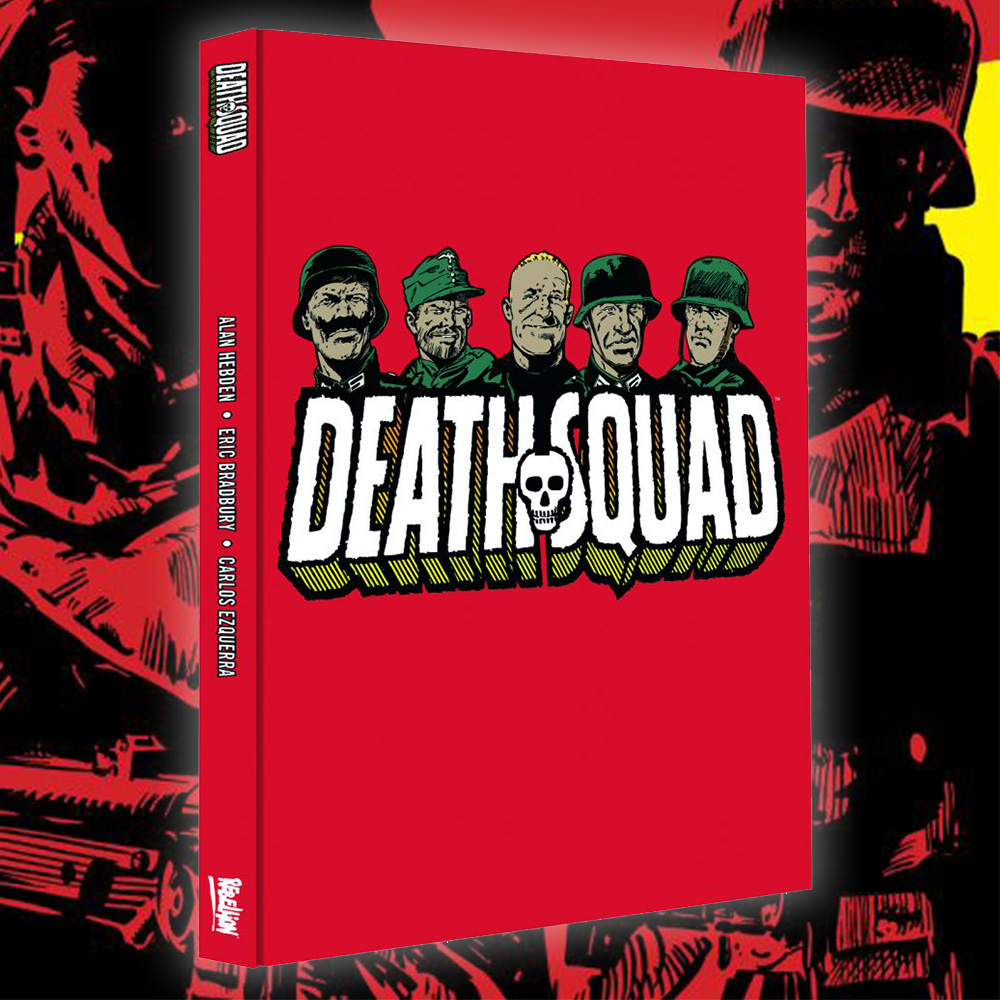 “This is Battle at its best” – Garth Ennis

All-out, all-action, no mercy – this new Death Squad collection brings together the brutal classic story from the groundbreaking and hugely influential Battle comic!

Out now from all good book and comic book stores, as well as digitally from the Treasury of British Comics webshop and the 2000 AD app!

There is also a limited edition hardcover is available exclusively from the Treasury of British Comicswebshop.

Featuring gritty art from Eric Bradbury and Carlos Ezquerra, Death Squad follows the deadliest band of fighters on the Eastern Front – a band of German soldiers trying to survive in one of the deadliest theatres of warfare in human history

During World War Two the Eastern Front was Hell on Earth – German Punishment Battalions were thrown into the thick of the conflict where they were expected to fight well and die hard. In these harshest of conditions only the strongest warriors survived.

Enter the Death Squad – Grandad, Swede, Licker, Gus and Frankie. Alone they were failures and outcasts, but together they were one of the most formidable combat units the Russians ever faced!

This uncompromising series is emblematic of Battle’s groundbreaking no-nonsense approach to storytelling, with writer Alan Hebden pulling no punches in the depiction of brutal fighting on the Eastern Front. 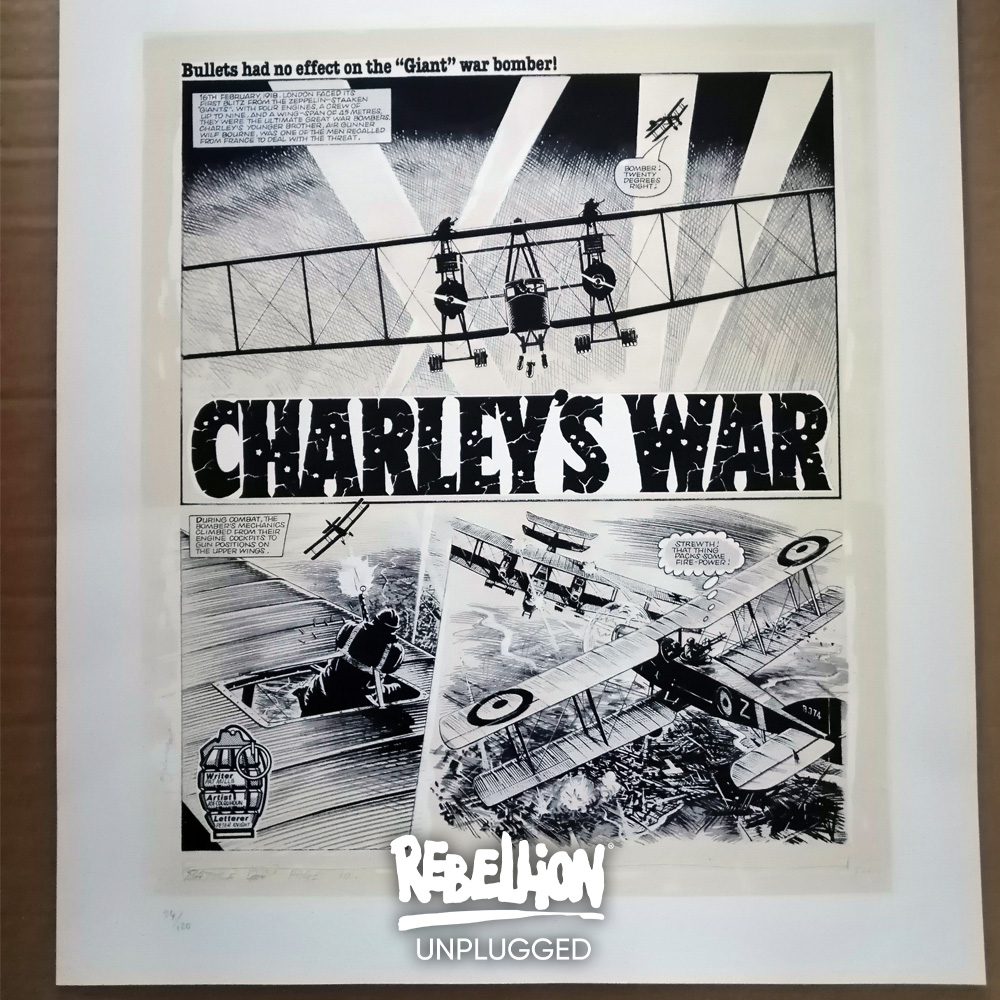 One of the greatest comics of all time and a moving tribute to the power of comic book art – the stunning replica screen print of a page from the groundbreaking Charley’s War is now available to order.

From the archives of the Treasury of British Comics, the world’s largest archive of English-language comics, Rebellion Unplugged is proud to present this limited edition screen print of art by the legendary artist Joe Colquhoun from Charley’s War episode #230.

This beautiful print is available on both paper and Bristol Board from the 2000 AD and Treasury of British Comics webshops.

This scale replica is taken from new high-resolution scans of Colquhoun’s breath-taking original art. Five layers of hand-pressed screen printing captures the creative process of the original page, through pencils, inks, hand lettering, and art fixes, to produce an artefact that is faithful both to its creator’s vision and to the lost art of making comic books.

This limited edition screen print is hand-numbered, and printed on archival quality acid-free Somerset satin 410gsm white paper, with a variant edition of 25 copies printed on artists’ Bristol Board to match the original. It reproduces the artwork in its original size of 400*470mm.

Originally printed in Battle Picture Weekly in August 1979 the page opens the strip’s dramatic portrayal of the blitz on London, and showcases Colquhoun’s incredible linework and storytelling.

Written by British comics legend Pat Mills and illustrated by Colquhoun, Charley’s War tells the story of underage British soldier called Charley Bourne, who enlists at the outbreak of World War One and goes on to experience the horror of the trenches and witness the brutal treatment ordinary soldiers received to serve the selfish interests of those in power.

Considered by many to be the greatest war comic of all time, and this new print is a testament to the extraordinary and under-appreciated talent of the artist who brought it to life. 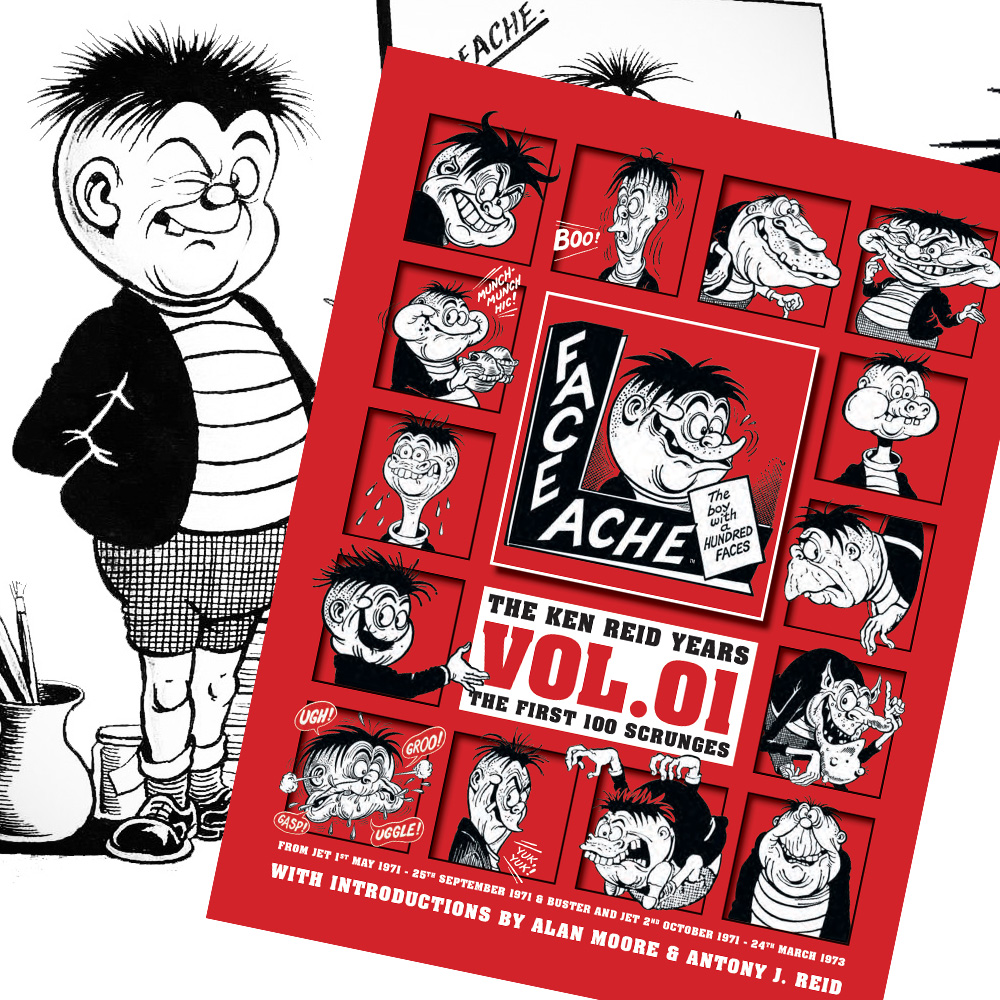 These are the humorous adventures of Ricky Rubberneck, the boy with a “bendable bonce” whose skin stretches like rubber. At will, he can scrunge his face into anything, whether it’s mimicing others or turning into monstrous creatures – but always coming a cropper!

BUY NOW FROM OUR WEBSHOP >>

Following the sold out hardcover edition, this new paperback brings back into print these classic stories by the master of comedic comic book illustration, Ken Reid.

Reid is consistently name-checked by the greats of comics – from Alan Moore to Kevin O’Neill, John Wagner to Pat Mills – for his unique art that is matched only by his enduring sense of humour. 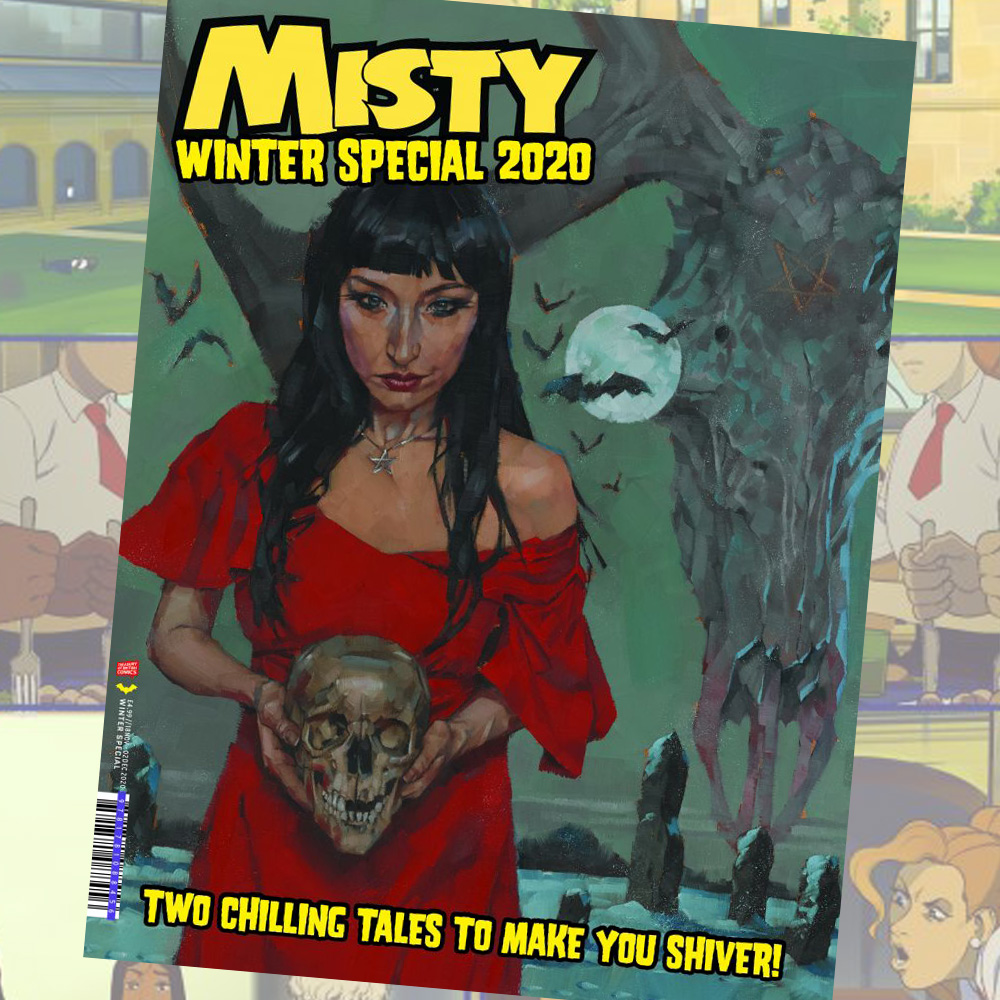 With the nights drawing in it’s the perfect time for traditional Christmas ghost stories – and the brand new Misty Winter Special is available to pre-order now!

Published between 1978 and 1980, Misty was the weekly anthology comic aimed at young girls that told tales with supernatural or spooky themes, and this winter special features two brand new tales designed to honour Misty‘s legacy and send a shiver down your spine!

Written by Anna Savory (Tales from the Satanic Library) & V.V. Glass (Doctor Who), and illustrated by V.V. Glass, ‘Infection’ is a disturbing tale about how far people are expected to conform to societal standards no matter how warped the rules become!

And in ‘Home for Christmas’, writer Lizzy Boyle (Scream! &  Misty) and artist David Roach (Anderson, Psi Division) unveil a harrowing ghostly home-invasion that reveals dreaded sins of the past!

All this is wrapped in a brand new cover by Simon Davis (Sláine)! 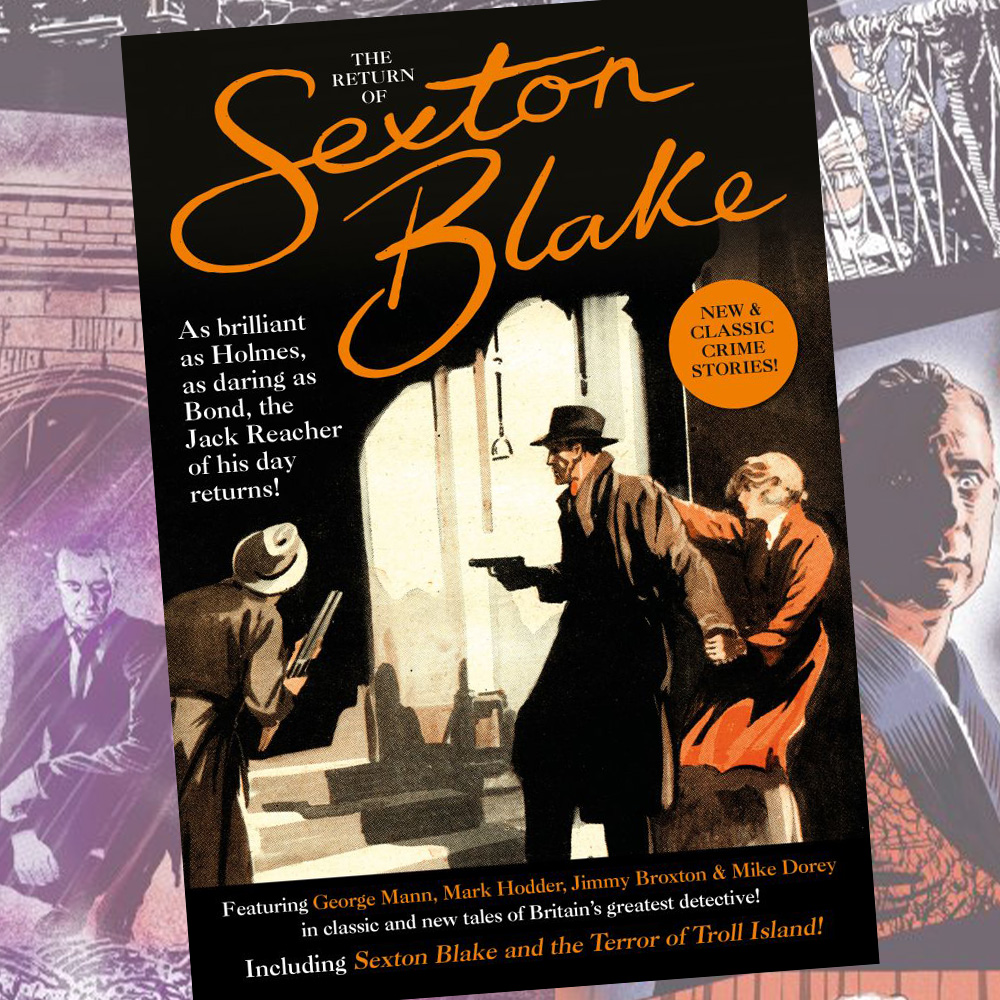 As brilliant as Sherlock Holmes, as daring as James Bond, he was the Jack Reacher of his day and now Sexton Blake is back!

The Return of Sexton Blake special is available to pre-order now from the Treasury of British Comics webshop.

Created in 1893 – six years after rival Sherlock Holmes first appeared in print – Sexton Blake went on to become a publishing phenomenon, appearing in 4,000 stories told written and drawn by over 200 different writers and artists and syndicated around the world. And now he is reborn!

Presented for the very first time in its full glory is the last Sexton Blake comic strip, originally published under the title “Victor Drago”, written by Chris Lowder (Dan Dare, Judge Dredd) and illustrated by Mike Dorey (Hellman of Hammerforce)

Then the adventure detective is back in action as George Mann (Doctor Who, Star Wars Adventures) and Jimmy Broxton (Hope, Doctor Who) brings us the first new Sexton Blake comic in decades! 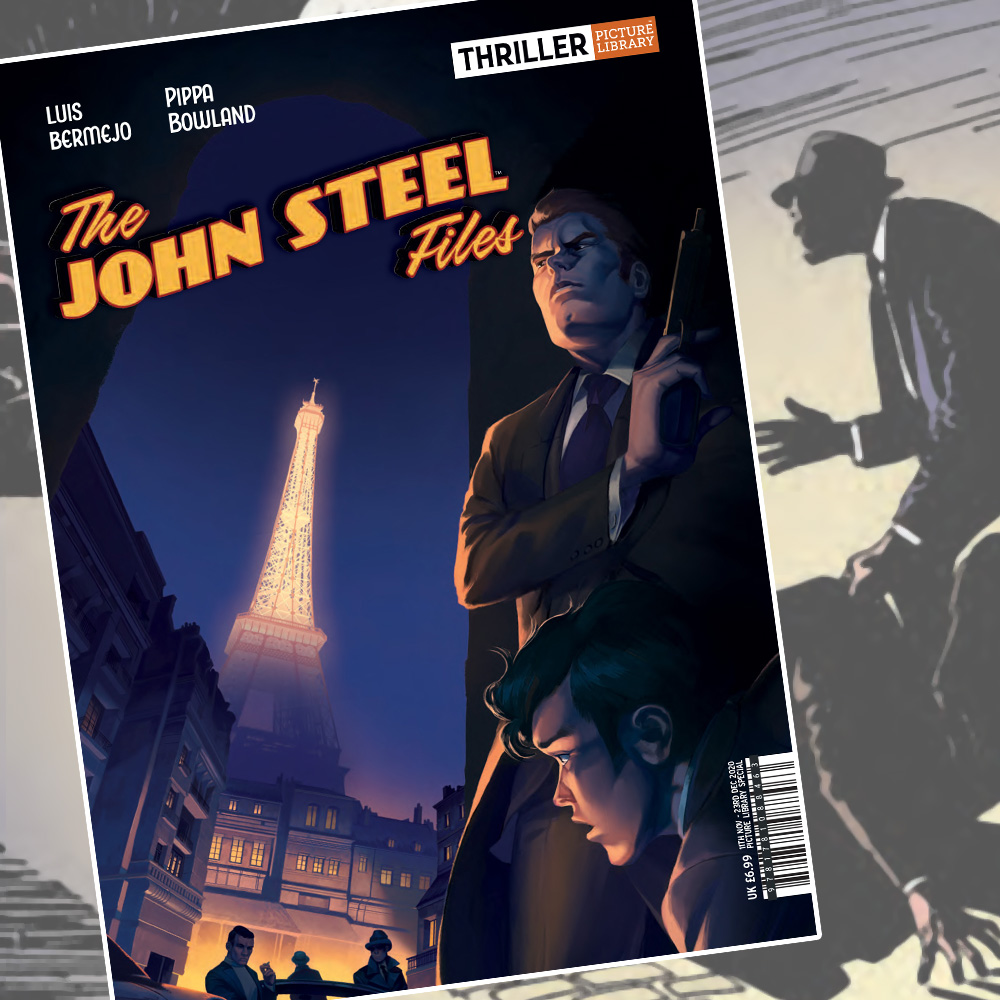 Sharper than Bond, cooler than The Saint – the indefatigable British spy John Steel is back!

The John Steel Files collects two Steel stories from the golden age of spy fiction, featuring stunning art from legendary artist Luis Bermejo (Creepy, Vampirella), and is out on 11 November!

Re-presented for a modern audience, these never-before-reprinted comics have been coloured by breakout colourist Pippa Bowland (2000 AD) and will feature a brand new cover by V. V. Glass (The Last Witch).

The 128-page comic book special features the stories ‘Bullets in the Sun’ (from Thriller Picture Library #371), where a British MP turns to his old WWII comrade, John Steel, after being blackmailed by sinister forces to keep him quiet about an international double-cross; and in ‘Play It Cool’ (Thriller Picture Library #379), while investigating the disappearance of Senator Harding’s son in France, Steel discovers a link to what seems to be a murder on the streets of Paris!

Steel’s exploits helped make Thriller Picture Library one of the best-selling titles on the newsstand and it featured a variety of war, spy, and detective heroes such as ‘Battler Britton’, ‘Spy 13’, and ‘Dogfight Dixon’.

Bermejo took over the series in 1960 and may have influenced the decision in early 1961 to transplant Steel from World War Two into the Jazz Age. Gone were his spying exploits in favour of life as a private detective.

Influenced by the contemporary sophistication of the early James Bond novels, Steel found himself in a world of jazz cafes and shady deals. This switch was reflected in the title of Steel’s stories too – this collection will feature the classics ‘Play it Cool’ and ‘Bullets in the Sun’.

Luis Bermejo Royo’s diverse career spanned Spanish, British, and American comic book industries and his style is instantly recognisable on series such as Adventures of the FBI, Apache, Tarzan, John Steel, Johnny Future, Vampirella, Captain Thunder, and his adaptations of Lord of the Rings and books by Isaac Asimov and Raymond Chandler. He passed away on 12 December 2015. 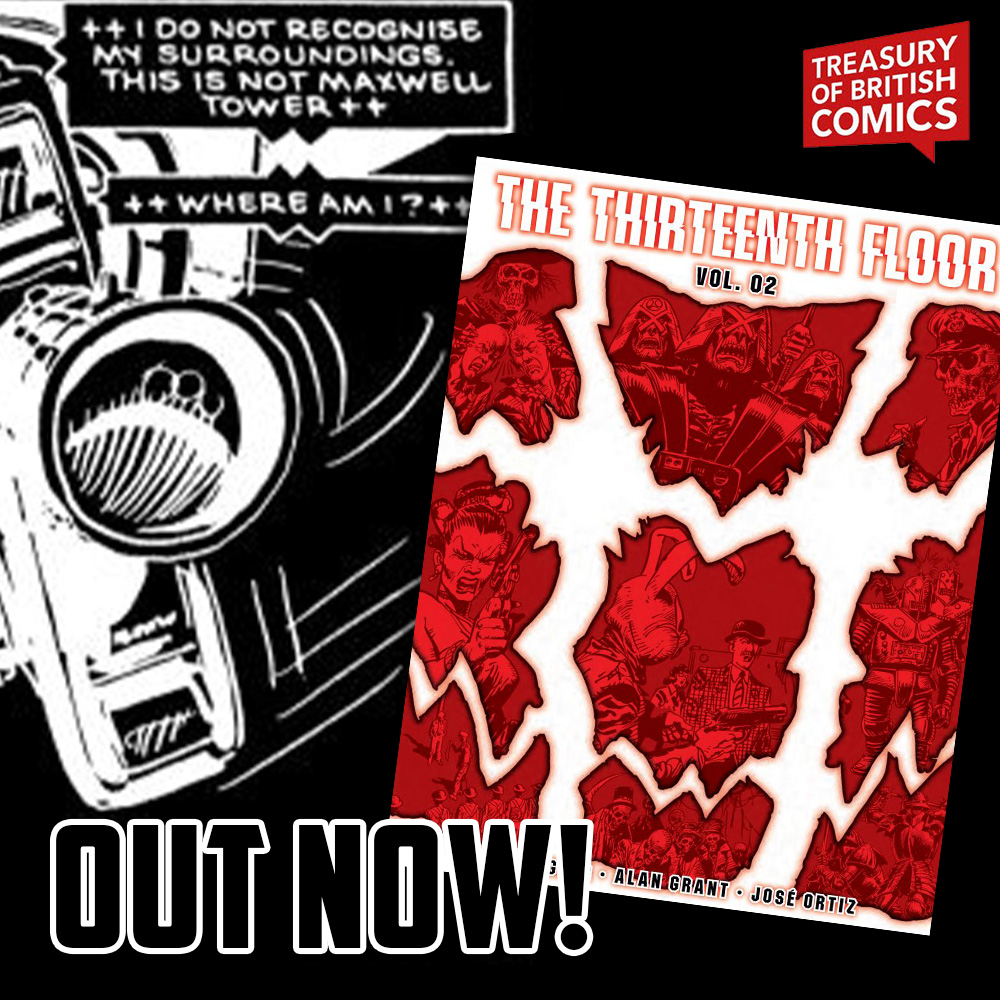 Privatisation has never been so deadly – the homicidal computer Max returns in the second collection of The Thirteenth Floor, featuring never-before-reprinted classic horror comics!

The latest release of classic comics from the Treasury of British Comics is available now in paperback, exclusive hardcover, and digital!

Max is being packed off to the private sector in one of the most iconic comics of the 1980s. Perhaps the most fondly remembered of all the strips to originate in the short-lived British horror weekly Scream!, The Thirteenth Floor was created by John Wagner and Alan Grant, with spookily atmospheric art from José Ortiz.

Max is an artificial intelligence created to be superintendent of council tower block Maxwell Tower. Max was determined to make sure that all of his tenants were safe and happy – even if it meant sending humans he didn’t like to his thirteenth floor – a nightmarish virtual world where their worst dreams became a fitting punishment, whether it was zombies, giant cockroaches, medieval executioners, or sharks!
But, after being exposed as a homicidal killer, Max the computer has been shut down and removed from Maxwell Tower – but the unscrupulous council has sold the computer to fancy Oxford Street department store, Pringles.

Now, Max has a new hunting ground and a whole host of potential ‘victims’, including shop-lifters, obnoxious customers and even secret agents.

This new collection features the stories from Eagle from 20th April 1985 to 22nd January 1986, with additional tales from the Scream! 1982 Holiday Special and the Eagle Holiday Special from 1986, most of which are being reprinted for the first time and have been remastered by Rebellion’s experienced reprographics team to provide maximum scares in time for Halloween!

Category: Comics
Tag: treasuryofbritishcomics
We use cookies to analyse the traffic on our website, which helps us make it easier to use.Accept cookiesMore info