The new creator competitions are back, plus a zarjaz line-up for the new-look 2000 AD panel! 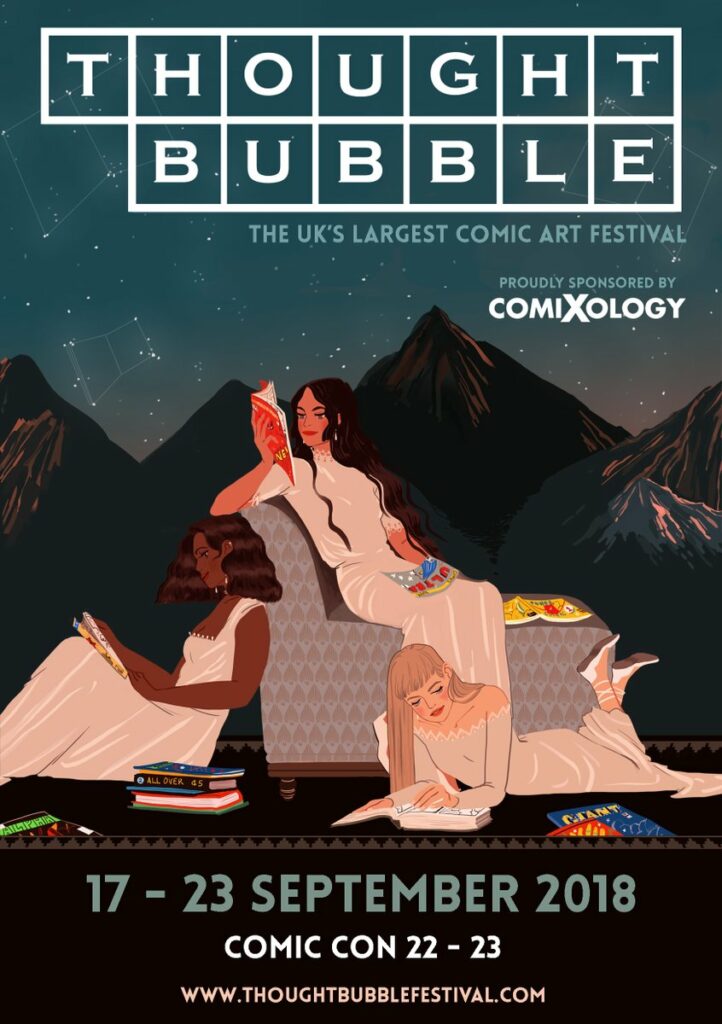 The weather might be getting cooler but things are hotting up in preparation for Thought Bubble 2018!

2000 AD will once again be travelling to the mighty city of Leeds for this annual convention celebrating the best in comic books and the visual arts. You’ll find 2000 AD in the ‘Ask For Mercy’ Marquee in front of Leeds Town Hall at Tables 5-6 with a selection of the latest graphic novels from the House of Tharg!

And would-be creators will yet again have the chance to get their big break with the 2000 AD Writing and Portfolio competitions – with the prizes being paid work for the Galaxy’s Greatest Comic!

So you want to write for 2000 AD? Bravo, Earthlet – but dare you put your idea to the test in the Theatre of Thrills? Future Shocks have not only been a staple of 2000 AD since 1977 but have forged some of its greatest writing talents, including Alan Moore and Grant Morrison! Writers are being invited to pitch their ideas for a brand new Future Shock to a panel of our top script droids on the Saturday at Thought Bubble – but they have just two minutes to make their case! Can you condense your idea, plot, and characters for a self-contained, four-page short story with a twist ending down into just 120 seconds? And in front of an audience? And convince some of our best writers that it’s a winner? Only the bold shall be victorious! The clock is ticking! Can you make your pitch and write your way into a job with 2000 AD? Get writing and make sure you’re first in line to appear – it’s first come, first served! Only our panel can decide whether your idea is worthy of the Mighty Tharg’s attention – the prize is getting paid to have your winning script turned into a Future Shock in the pages of the Galaxy’s Greatest Comic! Please note: the competition is not open to professionals working or previously working in the comics industry; pitches will only be accepted for the Future Shocks story series.

Many have tried to make it into the hallowed pages of the Galaxy’s Greatest comic, most have failed, but the winner of this year’s 2000 AD portfolio competition will be joining the likes of Dave Gibbons, Jock, Mick McMahon, Brian Bolland and Mark Buckingham! This year we have the ultimate prize – the winner of the portfolio session will get the chance to illustrate a Future Shock in 2000 AD! Editor Matt Smith will be judging entries to this year’s 2000 AD Portfolio Competition at the 2000 AD booth in the Ask For Mercy Marquee. Entries will be viewed on a first-come-first-served basis and selected entries will be put forward to the judging panel on Sunday at 3pm. PLEASE NOTE: only art based on the sample script will be seen and, if selected, you must attend the Sunday judging panel for your entry to be considered. The competition is not open to professionals working or previously working in the comics industry;

Come along and celebrate the past year of the galaxy’s greatest comic with some of the mighty Tharg’s best art and script droids, as well as a look ahead to what the future has in store, as we wish the British comics institution a happy 41st Birthday. Guaranteed to be zarjaz!

Come along and see which of the portfolio review entries from Saturday wins paid work with 2000 AD as Tharg’s art droids provide live critique on the best of the comics submitted! It’s not for the faint of heart, but the winner stands to win the ultimate prize in comics!!