The 2000 AD Thrill-Cast: A Tribute to Carlos Ezquerra 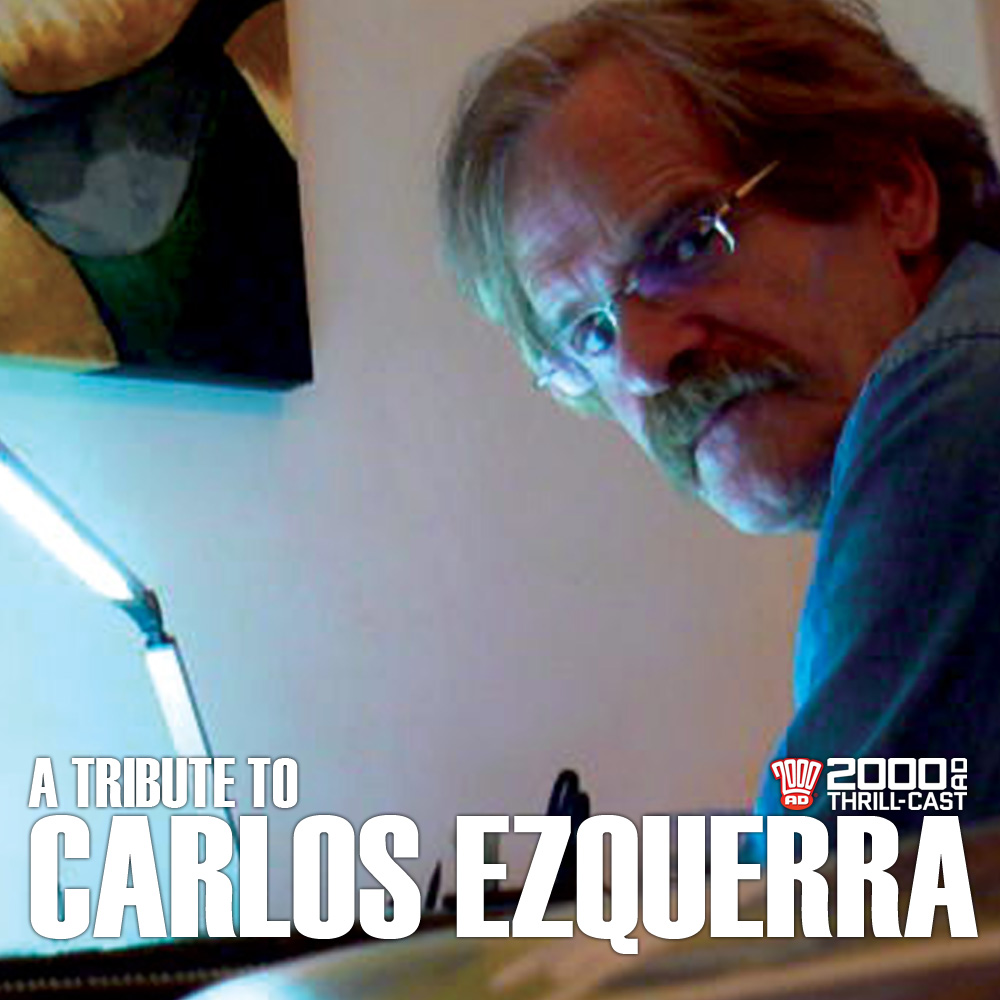 Everyone at 2000 AD is still reeling from the news that Carlos Ezquerra has passed away. In this episode of the 2000 AD podcast, we talk to some of the people who knew and worked with him, and just a few of the other 2000 AD creators who were influenced by his incredible work over half a century – Garth Ennis, Matt Smith, Dave Gibbons, Kelvin Gosnell, Jock, Rob Williams, David Baillie, PJ Holden, Simon Fraser and Al Ewing.

One of the all-time greatest comic book artists, the Spanish illustrator was one of the titans of 2000 AD. Originally from Zaragoza, Carlos began his career in Barcelona, drawing westerns and war stories for Spanish publishers. Breaking into the UK market on romance titles like Valentine and Mirabelle, he was head-hunted for the new IPC title Battle Picture Weekly where he drew Rat Pack, Major Eazy and El Mestizo.

In 1976, he was asked to create a new character, the future lawman Judge Dredd, for a new weekly science fiction comic called 2000 AD. Thanks to his enduring partnership with John Wagner, Dredd was to become one of the world’s most recognisable comic book characters, with Carlos there to apply his inimitable style to some of the biggest stories in the strip’s history, such as The Apocalypse War, Necropolis and Origins.

Thanks to Dredd as well as his co-creation of Strontium Dog, created for Starlord in 1978, his adaptation for 2000 AD of Harry Harrison’s Stainless Steel Rat, and thousands upon thousands of comic book pages, Carlos was lauded by readers and creators alike.

Modest and unassuming, Carlos was nonetheless a legend whose contribution to the global comic book industry cannot be understated. His distinctive style – characterised by breathtakingly dynamic, high-energy storytelling and the distinctive ridged thick inking that outlined so many key moments – was instantly recognisable.

Despite a brush with lung cancer in 2010, he continued to work and, although the cancer returned this year it was believed he was recovering well. His sudden death is a profound loss not just to 2000 AD but to the comic book medium.

The 2000 AD Thrill-Cast is the award-winning podcast that takes you behind-the-scenes at the Galaxy’s Greatest Comic! As well as interviewing top creators and famous fans, we bring you announcements, competitions, and much more! You can subscribe to the Thrill-Cast on your favourite podcast app , or you can listen now at 2000AD.com/podcast