The Mighty MykFlex returns to 2000 AD 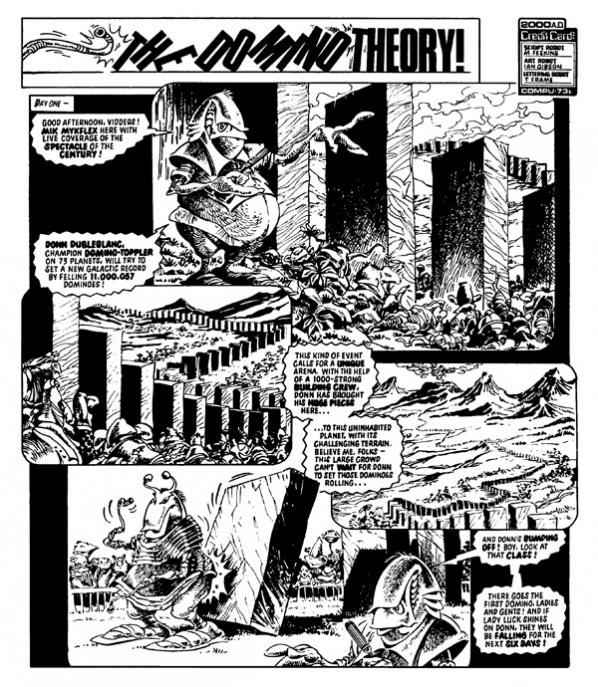 Merry Christmas, Earthlets! The bumper 100-page end-of-year 2000 AD Prog 1961 is now on shelves and available digitally, with NINE zarjaz stories to give you an alternative feast over the festive period!

One of these Thrills, ‘The Mighty MykFlex’, is penned by Martin Feekins, a writer who has returned to the Galaxy’s Greatest Comic after 31 years to follow up on his Future Shock ‘the Domino Theory’, featuring the hard-hitting reportage of alien journalist Mik Mykflex! Tharg’s interview droid reached out to Martin for a quick chat about his follow-up story, ‘The Mighty MykFlex’.

>> How did the ‘sequel’ to The Domino Theory come about?
MF: I came across an old 2000adonline.com forum page where a couple of people had mentioned Mik Mykflex fondly, which stunned me after all those years. Anyway, it was around the 30th anniversary of the strip, so I thought why not see if there was more life in the old ace reporter. I took a light-hearted approach to it, and it seems to have paid off.

>> What’s it like coming back to 2000 AD after all these years? What have you been doing in the meantime?
MF: They say things are sweeter the second time around, and that feels true in this case. Not that the first time wasn’t mind-blowing. The Domino Theory was the first thing I submitted for publication anywhere. I had no expectation that it would be published. When it was, I was delighted, but also, I think, went into panic mode. In an effort to build on the success, I sent Tharg every half-baked Future Shock idea I had. He was extremely patient and responsive for one so mighty, but eventually I wore out my welcome. I recently reread some of those submissions. They were even worse than I remembered. I hope this time round I’ll be more measured in my response – not to mention a better writer. Anyway, in the intervening decades, I’ve written in various media – comics, short stories, novel-length work, film and radio scripts – with a fair amount of stuff appearing in the small press and a some successes elsewhere. But a few professional successes this year – of which appearing in Prog 1961 is the crowning glory – have hugely strengthened my focus and commitment.

>> Tell us about the inspiration behind The Domino Theory and why you decided to revisit it?
MF: After 30 years, I honestly can’t remember where the inspiration for The Domino Theory came from, but whenever I reread the strip years later I always thought Mik was entertaining. I should perhaps have revisited him much earlier. Anyway, when I finally did I wanted to make it fun. As Mik was my one 2000AD success, I decided to set the story in the world of 2000AD and be a bit cheeky with it.

>> What’s the most difficult part of writing a Future Shock?
MF: Based on my recent efforts, I’d say the shock. In The Mighty Mykflex I think I got away with it because of the tone of the story, it’s less a shock ending and more a pleasant surprise. But having to turn a story on its head in more or less the final panel… well, my hat is off to all the great Future Shock writers. And that’s before you consider the challenge of creating engaging characters and a story that hasn’t been told before and of which the reader – hopefully – won’t work out the ending, all in four pages. But I am persevering.

>> Any plans to pitch more to Tharg the Mighty?
MF: Oh yes. Scripts will continue to wing their way from me to the Mighty One for as long as he’s prepared to put up with them. In fact, I wouldn’t be surprised if one headed his way later this week…

‘The Mighty MykFlex’ is part of the bumper 100-page end-of-year 2000 AD Prog 1961, available in print from all good stockists and digital from 2000 AD’s webshop and apps