The new droids who burst out of Thought Bubble: Tom Foster 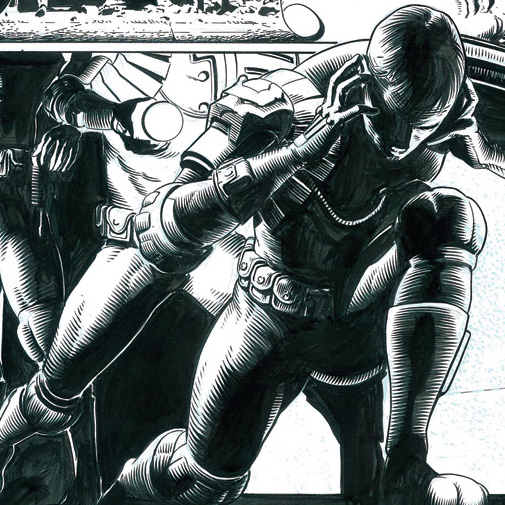 And, just as we have every year for many years, 2000 AD will be running its new writer and artist talent search, a unique opportunity for new writers and artists to break into the house of Tharg.

Writers have the chance to pitch their idea for a Future Shock to a panel of 2000 AD superstars and in front of a live audience and artists get the opportunity to have a live art portfolio session.

Richard Bruton sat down with Tom Foster, winner of the 2013 2000 AD Art Portfolio Competition to talk about what the win meant and where it’s taken him. Tom’s first 2000 AD work, off the back of his win was the Tharg’s Terror Tale: Done Deal, written by Alec Worley and published in 2000 AD Prog 1886. Since then he’s gone on to co-create and illustrate the first Storm Warning series in the Judge Dredd Megazine, written by Leah Moore and John Reppion, as well as having his art on Dredd and Sinister Dexter.

How did you hear about the 2000 AD talent search and what convinced you to enter?

Tom Foster: In 2011, the first year I entered, I was shopping myself around all the major UK conventions, trying to get noticed by a publisher. At the time, the competition had no advertised prize other than precisely that – the undivided attention of Tharg and his council.

When approaching editors or other artists at conventions, I often got good advice, but it was difficult to get an idea of precisely where I stood. So the competition, such as it was at the time, seemed like a good way, not only to be seen, but to get a sense of how I compared to those similarly willing to take the time to enter. Disillusionment or encouragement were on the table and either one seemed worthwhile, in its own way. By coming runner-up, I got a little of both.

Then, the following year, with the prize of a paid, published strip having been announced – and the person who beat me to winning line presumable disqualified from doing so again – the list of incentives was long enough to give me the motivation to try again.

How did finally getting the win at the third time of asking feel?

TF: The world ‘surreal’ is thrown around a lot these days, and probably only really belongs in the province of lobster telephones and melting clocks, but suddenly bumbling into a situation I’d imagined a million times, but never experienced was pretty weird. It seemed oddly in-keeping with my distorted dreams of success that my big break into comics came on a stage, in front of an audience. I’m not known for shying away from attention.

As for the competition itself, can you tell us a little about the actual process of entering, the preparation involved and the terror of pitching in front of the judging panel of experts?

TF: I had already attempted one of 2000 AD’s stock sample scripts before, so had a little bit of experience and the panel were very fair and encouraging. The fact that I came runner up for two years in a row was in equal parts frustrating and reassuring. The real terror was in getting to all the way the venue on years two and three and realising that I might not even get to the final this time. Tharg is an overlord of few words, and I could never tell if I had made a sufficient offering until the word was given.

Since winning the competition, how do you think your work has evolved and where has the competition win and subsequent Future Shock strip taken your comics career?

TF: I can’t over-emphasise the importance of this competition to my career. Since winning it, I have never gone fore for more than a month without a gig. There’s been a lot of changes in my process since my first entry, yet, oddly, it’s come almost full circle; my technique now being almost identical to the process I used in 2011. The quality and consistency of my draughtsmanship has improved a lot since then, so I feel more confident in relying on traditional methods and skills, rather than trying to reverse engineer something from elaborate digital processes.

I’ve turned my hand to Judge Dredd, Sinister Dexter, Bill Savage (sort of) and Storm Warning, which I co-created with Leah Moore and John Reppion. I’ve also done some tutorials for ImagineFX. I dabble in stand-up comedy too, but I’m sure nobody would be interested in that.

What advice would you give to up and coming writers and artists about getting into comics in general, and the 2000 AD/Thought Bubble competition in particular?

TF: I’m still early in my career, with plenty of time to completely ruin myself, so please don’t take my word as gospel, but I’ll try to offer something useful. I’d say it’s really important to nail the fundamentals. Study anatomy, composition, storytelling and anything else that seems relevant, until they’re second nature to you. Style is something that will evolve naturally in your work, rather than something to emphasise in order to compensate for blind-spots in your abilities. If you’re not good at drawing feet, learn to draw them better.

Finally, what’s coming up for you in the near, or not so near future?

TF: I’ll have a new series of Storm Warning coming out early next year (after the estimable Jimmy Broxton puts me to shame on the title for the next few months) and then, who knows? Bee-keeping, boxing, bocce ball – the world is my oyster!