Get the low down on 2000 AD and the Treasury of British Comics titles in March - check out our Diamond Previews listings and order from your local comic book shop now! 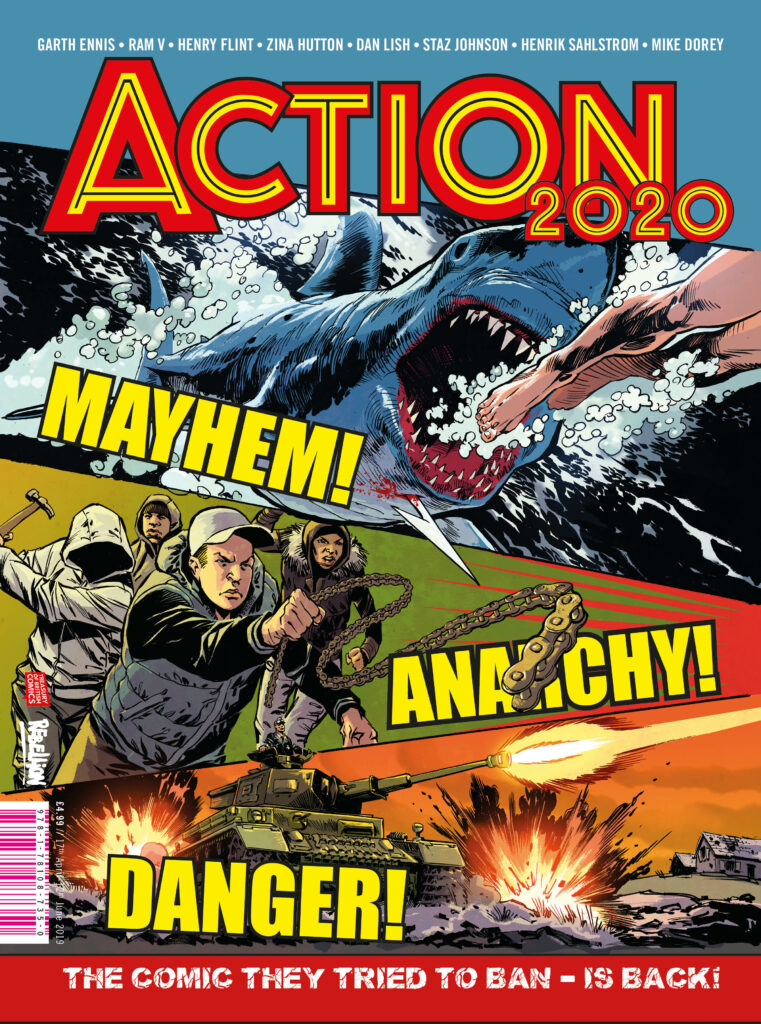 The advance information for Rebellion’s comics for March 2020 has been released – get all the skinny on what’s coming out from the House of Tharg three months from now!

March’s issues of 2000 AD and the Judge Dredd Megazine are now available to order from comic book stores in the January issue of Diamond Distribution’s Previews magazine, which is out this week!

Incredible SF action from the Eisner-nominated UK anthology! Future lawman Judge Dredd chases down an angry alien in ‘The Relic’ by Kenneth Niemand and Jake Lynch; a new case for Skip Tracer as a killer arrives on The Cube in ‘Nimrod’ by James Peaty and Paul Marshall; hitmen Sinister Dexter find themselves in a creepy fairground in ‘The Frighteners’ by Dan Abnett and Steve Yeowell; Zaucer of Zilk, Proteus Vex and Feral & Foe all come to their hair-raising finales; and a major new SF series makes its debut as Dan Abnett and Mark Harrison present ‘The Out’, a visually stunning excursion into the outer reaches of the cosmos!

More action and adventure in the future-shocked world of Judge Dredd! The lawman comes under attack by Black Atlantic pirates in new Dredd thriller “Plunder” by Michael Carroll and Karl Richardson; Metta Lawson investigates attacks out in the Badlands in Lawless: “Boom Town”; horror invades Devlin Waugh’s holiday retreat in “A Very Large Splash”; the surviving colonists attempt to escape Getri-1 in series three of “Blunt”; and we go back to the beginnings of the Judge system in new series “Dreadnoughts.” In addition there’s interviews, features and more, and in the bagged mini-trade, the adventures of Soviet ultra-assassin Orlok by Arthur Wyatt and Jake Lynch!
$13.00

A buddy cop tale like no other! Man and mechanismo, on the mean streets of Mega-City One. The next chapter in the legendary Judge Dredd epic, penned by incomparable Judge Dredd co-creator John Wagner. With Mega-City one eating Judges faster than they can be replaced, the Justice Department prepares once more to trial a radical solution for their manpower shortage: The Mark-8 RV Mechanismo unit, robotic judges programmed to deal with everything the city can throw at them, with freshly programmed AIs designed to empathise with the citizens they’ll encounter. Judge Dredd himself has never hid his feelings on granting judicial powers to machines, but the responsive, resilient and ultimately expendable machines may be the answer to the justice department’s problems. Dredd is ordered to put aside his prejudices and conduct an assessment with one of the latest models, nicknamed HARVEY…

The first of a four-volume series reprinting The Rise and Fall of the Trigan Empire – a landmark 1960s science fiction series which rivalled Game of Thrones in popularity and was the precursor to every mythic sci-fi adventure to come! Under the leadership of Trigo, the Vorg tribesmen band together to resist the Lokan invaders, forming a new country, The Trigan Empire. This is the epic story of its rise and fall. Featuring an extraordinary combination of the Roman Empire and ancient Greece, Trigo’s story is told in ground breaking fully painted artwork. This is the first in a series collecting all the stories painted by the legendary Don Lawrence.

Roy of the Rovers: All To Play for

Melchester Rovers are in a dark place. Due to Barry ‘Meat’ Cleaver’s underhand business practises, the team find themselves faced with a thirty-point deduction and have tumbled from the top to the bottom of League One. If that wasn’t bad enough, a fire has decimated Mel Park leaving the team with nowhere to play their home games. Rovers’ captain, Vic Guthrie is increasingly feeling the pressure and is starting to unravel. There is a light at the end of the tunnel though – star goal scorers Paco Diaz and Roy Race are back from their brief stint in the Premiership to help the Rovers survive the drop. Meanwhile, Melchester’s female team, Sowerby, are going from strength to strength and new coach Johnny Dexter has found a kindred spirit in young defender Rocky Race…

Mega-City One, the crime-ridden city of the future gets even crazier in this volume as superstar writer Grant Morrison’s (All-Star Superman) first Judge Dredd story, ‘Inferno’, is here, featuring the stunning art of Dredd co-creator Carlos Ezquerra (Adventures of the Rifle Brigade)! If that wasn’t enough, fellow writing legends Garth Ennis (Preacher), Mark Millar (Kick-Ass), John Wagner (A History of Violence) and John Smith (Cradlegrave), provide thrill-packed stories, involving everything from rogue robotic Judges to stylish hitmen, all illustrated by some of the best talents in British comics, such as Greg Staples (Sinister/Dexter), Brett Ewins (Bad Company) and Ron Smith (Judge Dredd).

It horrified prudes and censors alike – but the ground-breaking Action is back! The 1970s comic they tried to ban returns with the same blend of unbeatable characters and no-holds-barred action – all brought to you by the best talents of today! Featuring the killer shark Hookjaw by Dan Lish, juvenile delinquency in Kids Rule OK by Ram V and Henrick Stahlstrom, frontline German Panzer with Hellman of Hammer Force by Garth Ennis and Mike Dorey, merciless secret agent action with Dredger by Zina Hutton, and the brand new Hell Machine by Henry Flint!