Get the low down on 2000 AD and the Treasury of British Comics titles in November - check out our Diamond Previews listings and order from your local comic book shop now! 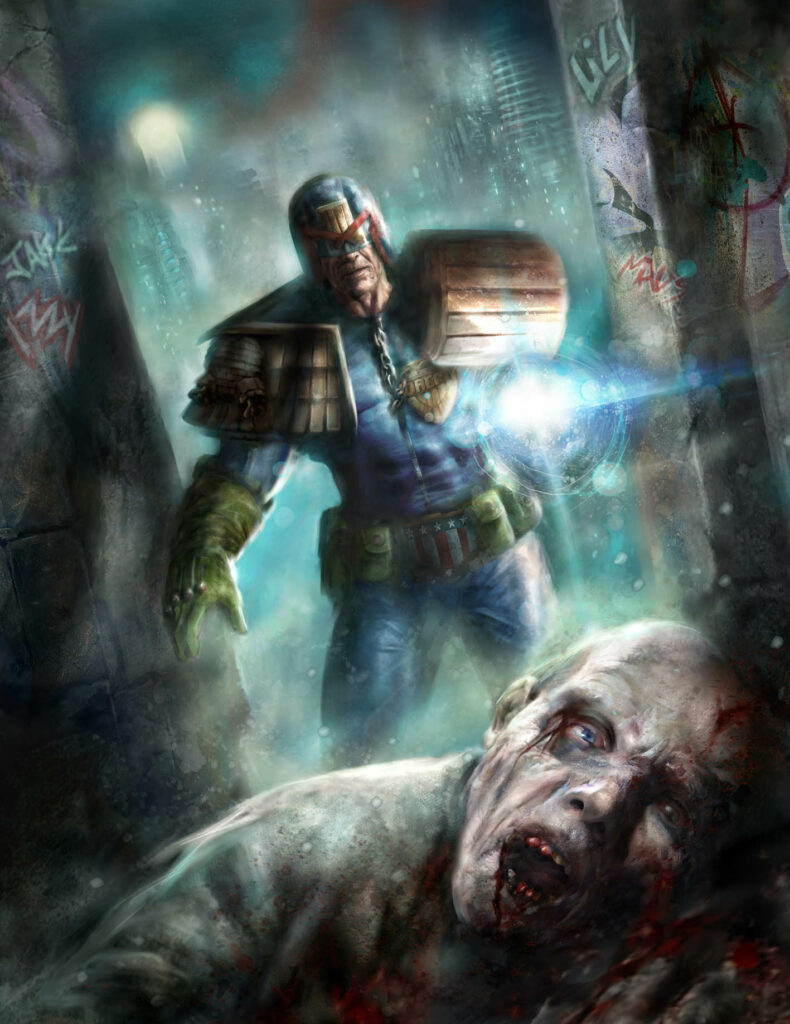 The advance information for Rebellion’s comics for November 2019 has been released – get all the skinny on what’s coming out from the House of Tharg three months from now!

November’s issues of 2000 AD and the Judge Dredd Megazine are now available to order from comic book stores in the September issue of Diamond Distribution’s Previews magazine, which is out on 28 August!

Incredible SF action from the Eisner-nominated UK anthology! Judge Dredd’s trip to South America reaches its explosive conclusion ‘Guatamala’ by John Wagner and Colin MacNeil, before he faces a new serial-killer case back in Mega-City One in ‘The Harvest’ by Michael Carroll and Nick Percival; cop Bridget Kurtis follows the trail of bodies in Brink: ‘Hate Box’, by Dan Abnett and INJ Culbard; the Sovs find the Dark Judges are no ordinary enemy in The Fall of Deadworld: Doomed by Kek-W and Dave Kendall; private investigator Mallory Hope is faces terrifying dark magic in Hope… Under Fire by Guy Adams and Jimmy Broxton; and seventeenth-century zombie hunter Defoe shoots for the moon to save humanity from an evil entity in ‘The Divisor’ by Pat Mills and Stewart Kenneth Moore!

More action and adventure in the future-shocked world of Judge Dredd! A shocking revelation about a former Chief Judge is splashed across the Mega-City media in ‘Father’s Day’ by Rory McConville and Ian Richardson; Psi-Judge Anderson’s cadets battle for their lives in the finale to ‘The Dead Run’ by Maura McHugh and Patrick Goddard; undead curator Henry Dubble introduces another twisted Black Museum tale in ‘Big Marilyn’ by Laura Bailey and Brian Corcoran; Nia makes a fateful choice in the last episode of ‘Diamond Dogs’ by James Peaty and Warren Pleece; and The Returners must stop a terrifying evil escaping in ‘Chandhu’ by Si Spencer and Nicolo Assirelli. In addition there’s interviews, features and more – and in the bagged mini-trade, the fight against the alien invaders reaches its conclusion in volume two of Damnation Station by Al Ewing (The Immortal Hulk) and Mark Harrison (Durham Red)!

June 6, 1944. D-Day. The allies launch a great offensive in Normandy in order to rid Europe of the Nazi terror. The strategic and human scale of the operation, led by General Eisenhower, is unrivalled. No less than 160,000 men will be parachuted and land on five beaches in the northern France. Thus begins Operation Overlord. Finally, the collected edition of the international best-selling series! Featuring fantastic full color artwork throughout by DC Comics and Star Wars artist David Fabbri.

The terrifying sequel to the best-selling tale of Judge Dredd’s greatest villains, Dark Judges! They are the four horsemen of the horror apocalypse, Dark Judges who declared that life itself is a crime. As they continue to turn their world into a necropolis, young Jess Childs rallies a team of survivors to rescue the one person who can help her prevent the death of the world! High body horror for fans of the iconic horror franchises Saw, Day of The Dead, and The Fly.

The latest incendiary volume of Judge Dredd: The Complete Case Files, collecting the adventures of the iconic British character, presented in chronological order, complete and uncut! Former foes with raw grudges pour out of the woodwork when a dimension jump gets hijacked; an assassin carries out executions under the direct orders of the Chief Judge! Featuring art by comics superstar Jock (The Batman Who Laughs)!

Glorious grotesques from around the globe! Beautiful and bizarre illustration collection from legendary British cartoonist, Ken Reid, who was (ir)responsible for Faceache and being released in a hardcover edition to coincide with the holidays! World Wide Weirdies collects the almost weekly run of Reid’s beautifully bizarre illustrations from IPC’s Whoopee! and Shiver and Shake. Usually displayed in color on the back cover, they are among the most striking images to have appeared in British comics!