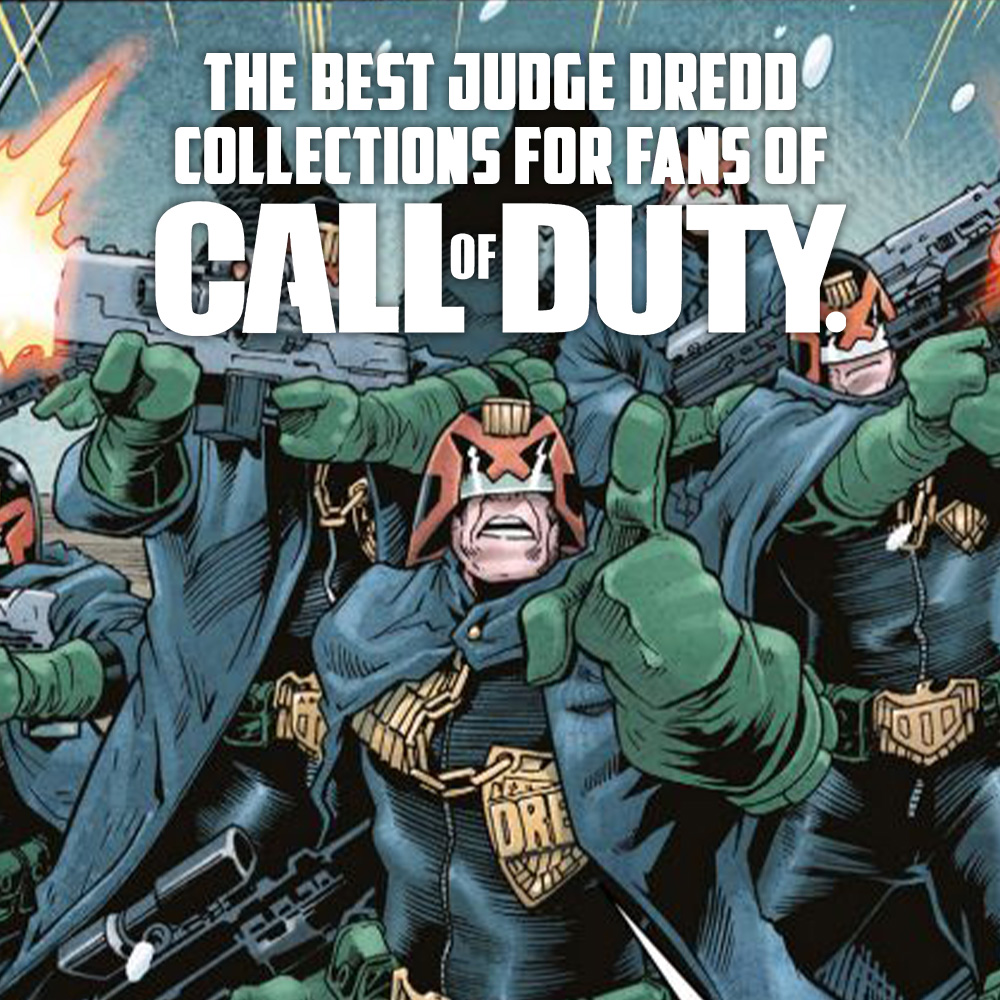 Judge Dredd comes to Call of Duty this week – and if bringing justice to the battlefield has got you keen to try some authentic future law enforcement, we’ve got the 411 on ideal Dredd collections for CoD players!

He’s been bringing the law to the lawless on the mean streets of Mega-City One for almost 45 years – Judge Dredd is judge, jury, and executioner all rolled into one. The sheer number of stories since his debut in 1977 means there’s something for everyone, from everyday crime-busting to creepy horror, from procedural drama to all out war!

So lock and load, and dive on into the world of the Big Meg with the collections listed below, all available now from 2000 AD‘s webshop and app!

Plus, there’s HALF OFF digital collections of the Essential Judge Dredd graphic novel line!

One of the all-time greatest Dredd epics, where the lawman turns guerilla fighter! When the citizens of Mega-City One’s massive city blocks declare war on each other, Judge Dredd realises it is merely a prologue to an all-out nuclear attack by East Meg One! As warheads rain down, Dredd leads a brave resistance, building to an earth-shattering decision that shakes his world to its core!

Welcome to The Pit, Mega-City One’s dumping ground for every misfit and foul-up Judge. When he’s sent in to clean The Pit up, Judge Dredd and a small team of trusted Judges uncover a trail of deceit and murder that leads to the very top. But the only question is, will Dredd live long enough to bring the culprits to Justice?

When Mega-City One mining colony K-Alpha 61 declares independence and renames itself Liberty, Justice Department sends the vast fleets of the Special Judicial Squad in a bid to nip the rebellion in the bud! This high-octane space adventure by best-selling author Dan Abnett and artist Colin MacNeil is ideal for Warhammer fans!

Dredd vs zombies! When the dead rise from the grave, can even Judge Dredd stop them? The mega-epic Judgement Day, contained in Judge Dredd: The Complete Case Files vol.17 sees billions die, cities vaporised, and the world brought to the brink of extinction, by an all-star creative line-up, including Preacher team Garth Ennis and Steve Dillon.

HALF HUMAN… ALL KILLER! Sergeant Nate Slaughterhouse is the veteran of many bloody off-world wars, but after being mortally wounded on the battlefield the only way to save his life is to cybernetically reconstruct his body, turning him into more machine than man – a mandroid! Discharged from the army, Nate returns to Mega-City One but finds life back home even harder – and deadlier! This is Dredd at its gritty, pulse-pounding best!

Leading a covert mission by an elite TAC team deep into Sov territory, Dredd heads into the depths of Siberia but finds that things start to go terribly wrong… even his training and iron will might not be enough against the bitter cold, angry mutants and the echoes of past conflicts!