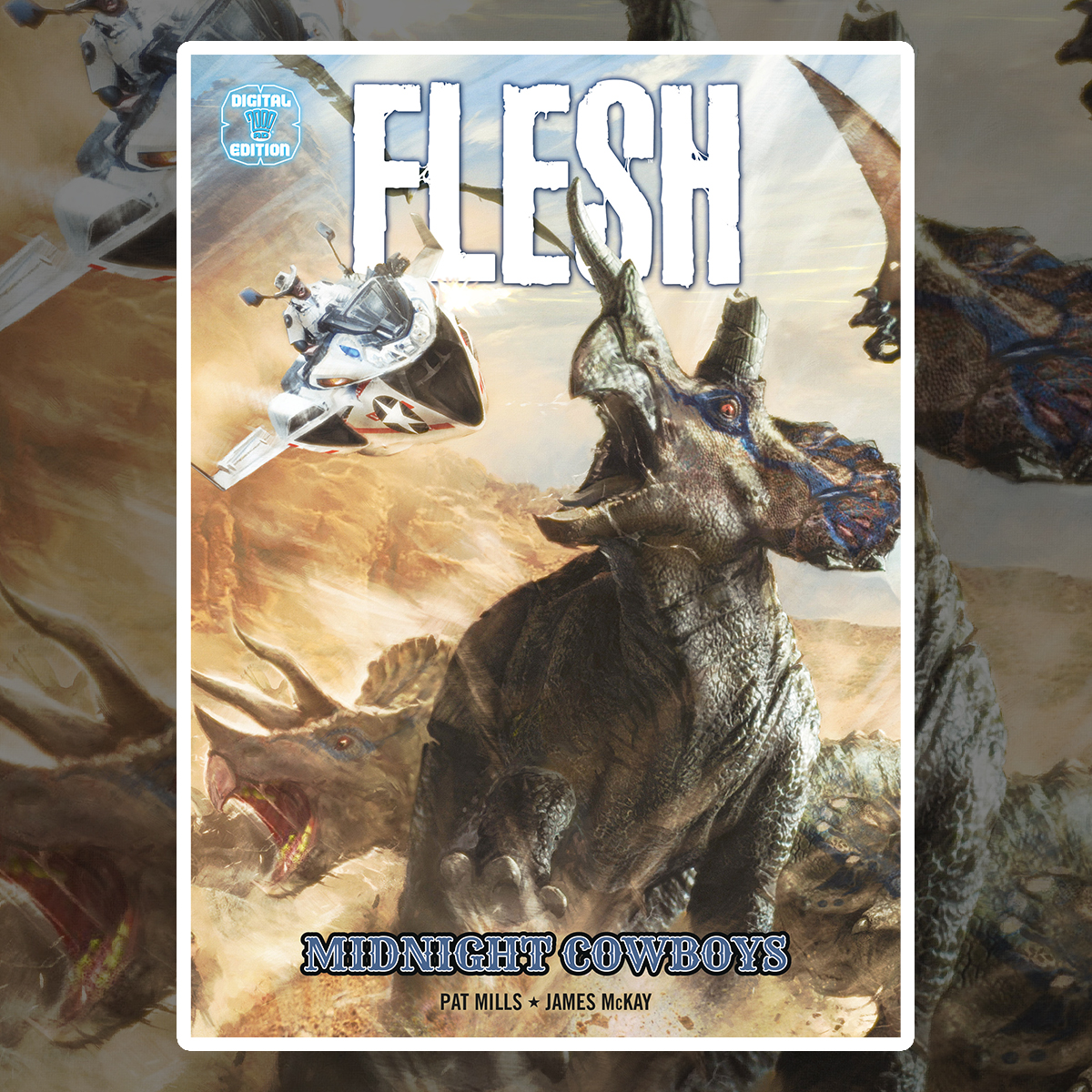 The 23rd century, mankind is surviving on synthetic food, but the Trans-Time corporation has a solution: sending its employees back in time to the age of the dinosaurs and butcher them for their meat… but these humungous beasts aren’t afraid to bite back!

This futuristic Western story by Pat Mills and James McKay, and with cover art by Mark Harrison, is now available in an exclusive digital-only graphic novel for the first time!

Created by Pat Mills, Flesh was one of the original stories featured all the way back in Prog 1, and quickly became a fan-favourite for bloodthirsty readers. Originally running from 1977 until 1979, there was a smattering of stories in the 1990s, but in 2007 the dinosaurs were brought back to life and Flesh was fully revived, and has been a staple of the Prog ever since.

In the original strip, and this – the modern continuation with art by James McKay – time travelling corporations send humans back to the ancient past to farm dinosaurs for meat to feed a hungry future, but the employees of Trans Time discover pretty quickly that their dinner likes to fight back! 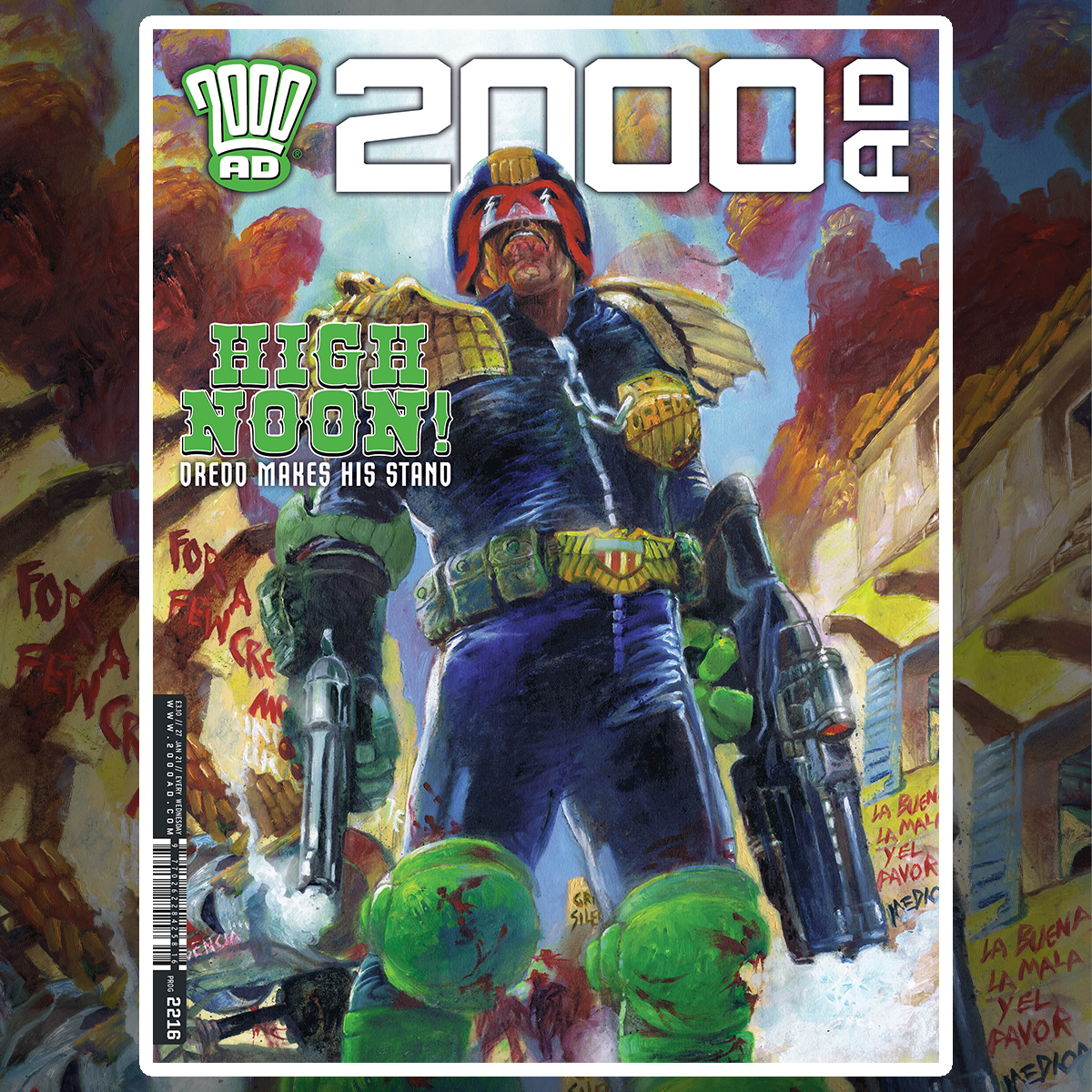 Another week, another jaw-droppingly zarjaz issue of the Galaxy’s Greatest Comic, guaranteed to energise your diodes and keep your imaginations firing during these lockdown days.

Within these scrotnig pages you’ll find the latest instalments of Sláine, Proteus Vex, Durham Red and Hershey, plus the ghafflebette climax to Dredd’s current case, Desperadlands!

If that still doesn’t satiate your hunger for sci-fi excitement, make sure you don’t miss this month’s Judge Dredd Megazine, which features a complete Dredd thriller from Ken Niemand and Patrick Goddard alongside the latest chapters of Megatropolis, Dreadnoughts, The Returners and Deliverance.

In addition to that there’s the third part of the serialised 2000 AD Encyclopedia (covering F-G), and a fascinating interview with
former IPC Youth Group head honcho John Sanders to coincide with the publication of his memoirs King’s Reach: 25 Years at the Top of Comics.

One of Tharg’s first contacts upon arriving on Earth in 1977, the Sanders humanoid was instrumental in getting 2000 AD into Terrans’ hands!

2000 AD Prog 2216 is out now from all good newsagents and comic book stores, plus digitally from our webshop and apps! Don’t forget that if you buy an issue of 2000 AD in the first week of its release then postage in the UK is free!

Mega-City One, 2142 AD. Home to over 150 million citizens, this urban hell is situated along the east coast of post-apocalyptic North America. Crime is rampant, and only the zero-tolerance Judges can stop total anarchy. Toughest of them all is JUDGE DREDD — he is the Law! Now, outside Ciudad Barranquilla, Dredd has been captured by former Judge Syan Hegedos, who plans to sell him to the highest bidder. But he’s broken free…

Late 22nd century. Of all the mutants that have operated as Search/Destroy agents, perhaps the most feared is vampire DURHAM RED, who requires blood to survive. Mistrusted by both the criminals she hunts and her fellow Strontium Dogs, Red has a formidable reputation that precedes her. Now, she’s trapped in the Hawks-Carpenter Holding Station and Stillwater’s extraction team are closing in on her…

Albion. Celtic warrior SLÁINE united the tribes of the Earth Goddess Danu and became the first High King of Ireland, but is now a wanderer, seeking adventure where the Goddess directs him. Following Slaine’s slaughter of Trojans at Beal An Atha in an
ongoing battle for Albion’s freedom, Emperor Brutus has sent a Dragon Squadron to track him down at Inniscrone, but the barbarian has a plan…

Another galaxy, the far future. The centuries-long war between the Alliance and the Obdurate people is over, a conflict brought to an end with the deaths of billions when the Alliance teleported a dying white dwarf star into the Obdurate system. Imperium agent PROTEUS VEX was charged with finding Chancellor Rho 7 Baryon, and when the flesh-pilot that controls Vex entered Baryon’s body he absorbed some of his memories…

Judge Barbara Hershey was one of Justice Department’s most respected and capable young officers before she became Chief Judge. Leading the city through numerous challenges, she only occasionally clashed with Dredd — until the ‘Small House’ affair and the revelation of Judge Smiley’s clandestine operations on her watch. Now, seriously ill from a microbial virus, she’s faked her death to deal with Smiley’s legacy…