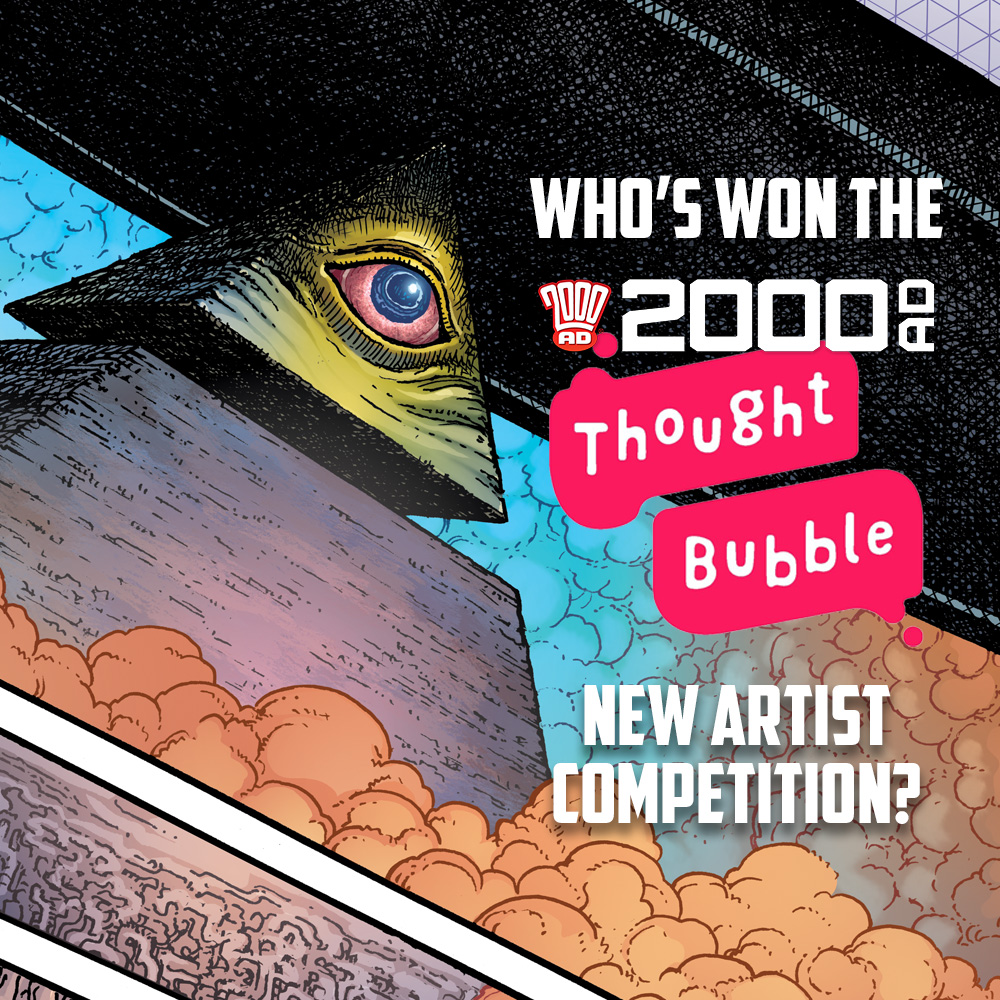 No virus will stop us finding the next generation of 2000 AD creators! The 2000 AD talent search panels have gone online for Thought Bubble’s digital show and the judging panel has unveiled which aspiring artist will see their work appear in the pages of the Galaxy’s Greatest Comic.

It’s Dragons’ Den meets the Nerve Centre as Tharg the Mighty’s droids sit in judgement on hopeful writers and artists looking to join their ranks!

This year, contestants were asked to draw their own version of the four-page story JOURNEY TO THE EDGE OF THE EARTH, written by writer/artist Chris Burnham and, after a rigorous selection process by Tharg the Mighty, six entries were chosen to go before our expert panel – Matt “D’Israeli” Brooker (Judge Dredd, Scarlet Traces), Chris Burnham (Batman Incorporated, Officer Downe), and John McCrea (The Boys, Hitman).

The prize is paid work with the legendary 2000 AD and the winner will join previous winners such as Robin Henley, Paul Williams, Tom Foster, Daniel Dwyer, Will Morris, and Tilen Javornik.

So who won? Watch the judging panel now >>

Congratulations to James Newell, whose work will appear in 2000 AD in 2021! And thank you to everyone who entered this year’s competition – we’ll be back at Thought Bubble next year!

Here are all the entries who made it through to the judging panel – which is your favourite? 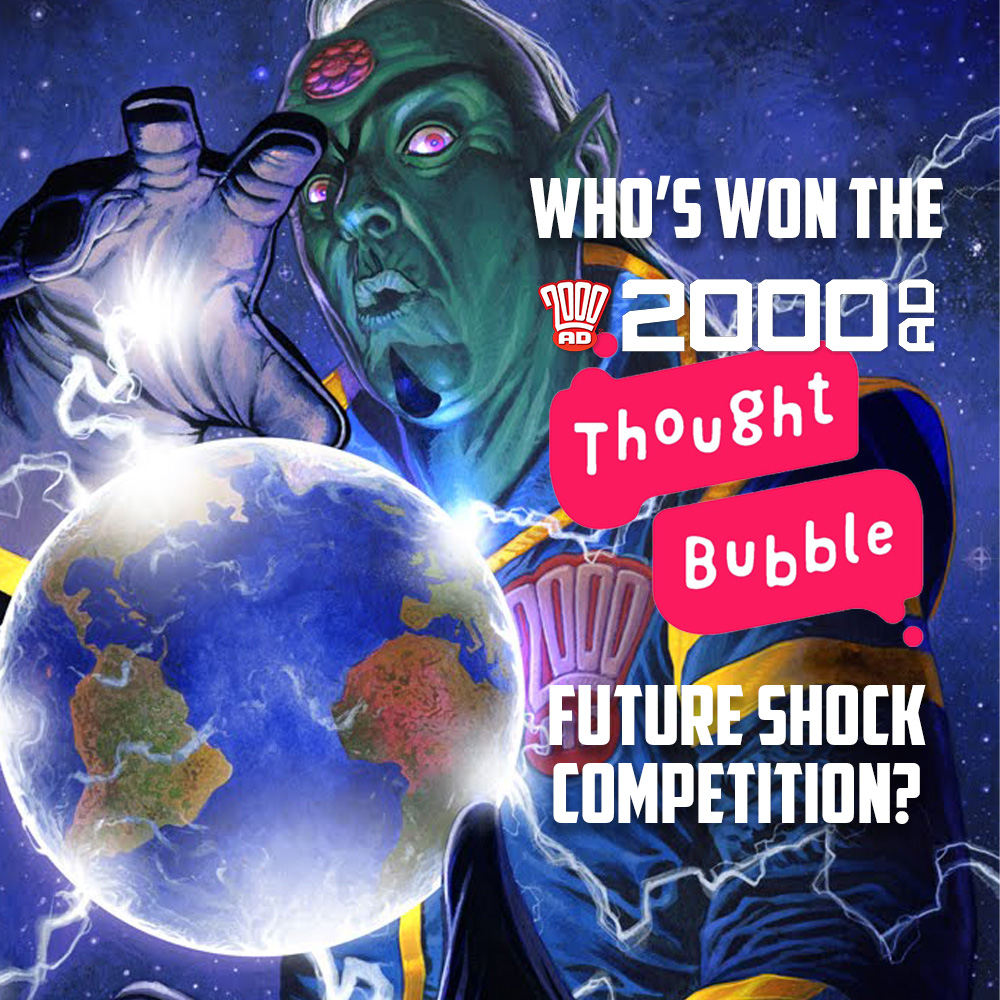 The 2000 AD writer talent search at Thought Bubble is back and not even the pandemic can stop us finding the next scripting star for the legendary British comic!

Writers looking to follow in the footsteps of giants such as Alan Moore, Neil Gaiman, and Mark Millar sent in two-minute videos of their Future Shock pitches – join creators including Ian Edginton (Hinterkind), Rory McConville (Judge Dredd), and Maura McHugh (Anderson, Psi Division) as they watch and judge who should then get the chance to turn that into a strip for 2000 AD!

2000 AD editor Tharg the Mighty sifted through more than 150 entries to put together a shortlist for our judges, featuring pitches from these contestants:

So who wins? Find out by watching the panel below…

Congratulations to winner Paul Starkey for his entry, The Torturer’s Apprentice!

Paul will now work with 2000 AD editor Matt Smith to turn his pitch into a polished script, which will appear in a future issue of 2000 AD!

A huge thank you to everyone who pitched this year and congratulations to all those who made the shortlist. We’ll be back for Thought Bubble 2021 with the greatest prize in comics! 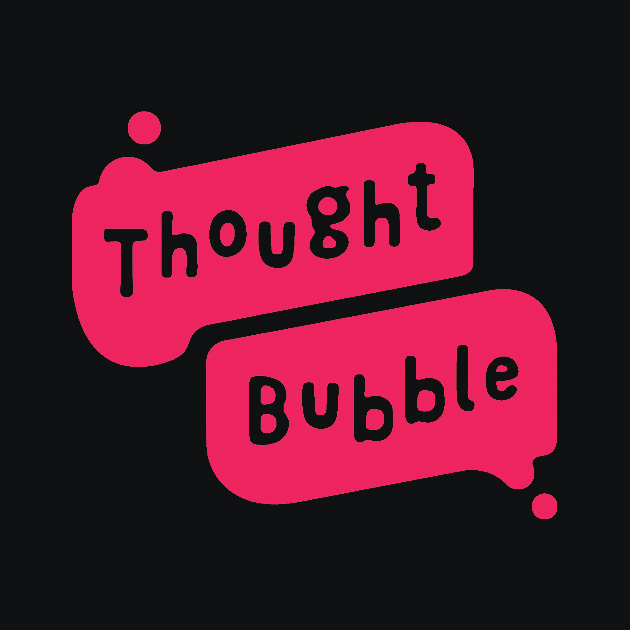 At this year’s Thought Bubble, 2000 AD returned with the only talent search of its kind in the UK – with the prizes being paid work with the Galaxy’s Greatest Comic!

It’s Dragons’ Den meets the Nerve Centre as Tharg the Mighty’s droids sit in judgement on hopeful writers and artists looking to join their ranks.

The script competition, at which would-be writers have two minutes to pitch their idea for a Future Shock, took place on the Saturday afternoon in front of a panel made up of current 2000 AD editor and writer Matt Smith, writer Leah Moore, and writer and former 2000 AD editor Andy Diggle. Almost 30 entrants nervously awaited the chance to stand before a live audience and deliver their pitch, with a dozen making it through in time.

Congratulations to Liam Johnson, whose pitch impressed the judges and will now be published in a future issue of 2000 AD!

This year, entrants for the art competition had to draw pages from The Ticket, a Terror Tale by Paul Tobin and originally drawn by Dan Cornwell. After getting through a HUGE line of would-be contestants, 2000 AD editor Matt Smith chose nine entries to go forward to the judging panel on the Sunday morning.

In front of a live audience the panel – made up of writer Leah Moore (Storm Warning), and artists Mike Dowling (Anderson, Psi Division) and Frazer Irving (Judge Death) – went through each entry and gave advice to the artists on how to improve their work.

But in the end there could be only one winner – and the panel unanimously chose the entry by Robin Henley!

Robin will now join previous winners Paul Williams, Tom Foster, Daniel Dwyer, Will Morris, and Tilen Javornik who have all gone on to appear in the pages of 2000 AD!

This is the first two pages of Robin’s winning entry:

Thanks to all the contestants of both competitions – we’ll be back to Thought Bubble next year on the hunt for new talents for the Galaxy’s Greatest Comic!

And here are the other entries who made it through to the judging panel – which is your favourite?

Category: Comics
Tags: events, new talent, thoughtbubble
We use cookies to analyse the traffic on our website, which helps us make it easier to use.Accept cookiesMore info