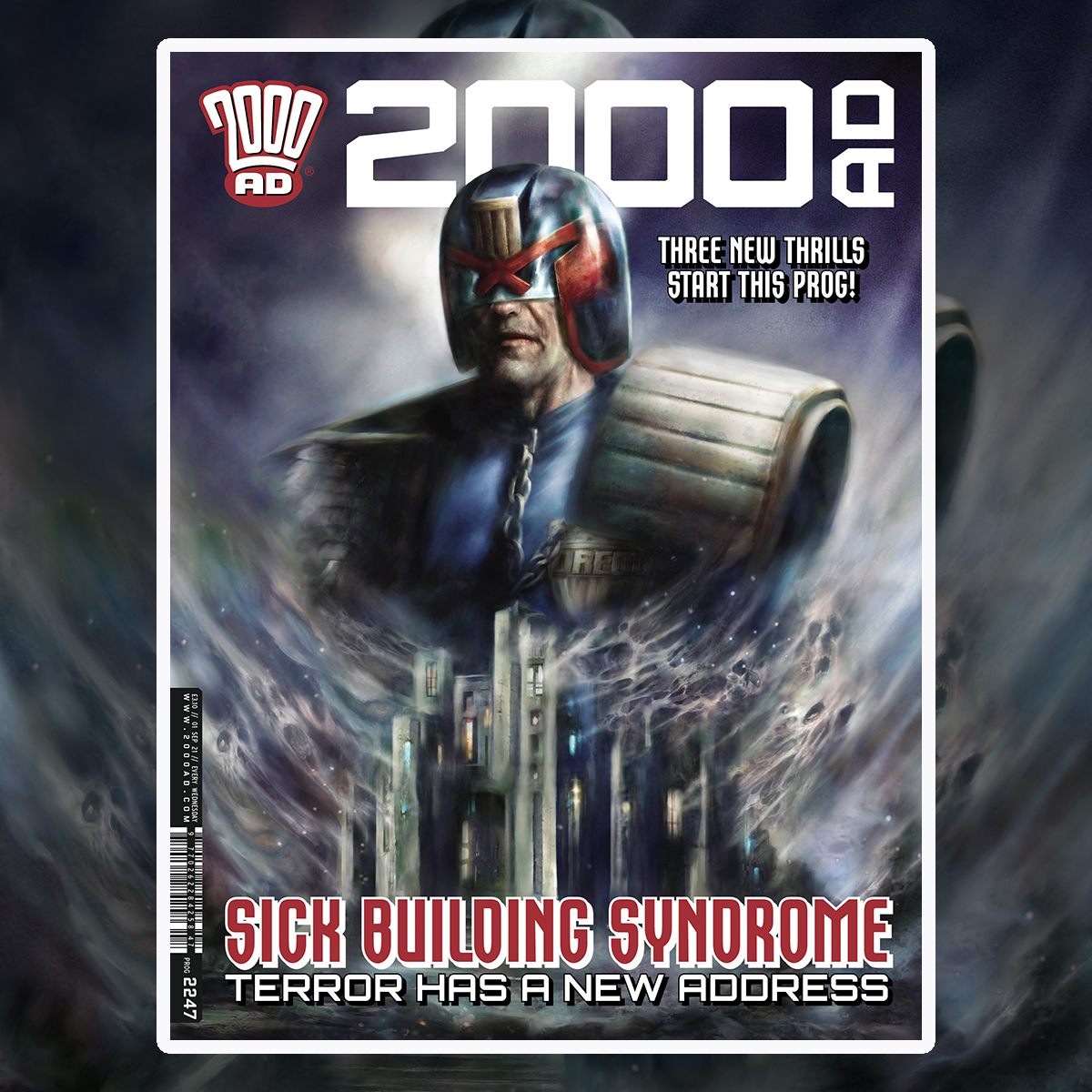 Welcome to your future once again, Terrans, as we bring you another diode-dazzling issue of the Galaxy’s Greatest Comic.

We’re back to business as usual this week after Tharg’s nephew Joko-Jargo’s ghafflebette Regened takeover bonanza last prog — as ever, let us know which all-ages strips particularly stoked your imaginations via input@2000ADonline.com — and we’ve got no less than three new stories starting within.

Ken Niemand and Nick Percival collaborate on a seriously creepy Dredd thriller The House on Bleaker Street; Gordon Rennie and Simon Coleby return to the Nort/Souther conflict for the latest Jaegir arc, The Path of Kali, as a vengeance-fuelled Atalia is determined to wipe out the enemy by all means necessary; and Robert Murphy and Steven Austin team up for another of Tharg’s 3rillers in the shape of The Mask of Laverna, once again starring Adelphi from Keeper of Secrets (last seen in Progs 2115-2217). Add to that the next chapters in Skip Tracer and Dexter, and it’s a scrotnig package of cerebella-busting sci-fi!

Accept no substitutes, Earthlets — this is the home of zarjazness!

2000 AD Prog 2247 is out now from all good newsagents and comic book stores, plus digitally from our webshop and apps! Don’t forget that if you buy an issue of 2000 AD in the first week of its release then postage in the UK is free!

JUDGE DREDD // The House on Bleaker Street // Part One!

Mega-City One, 2143 AD. Home to over 160 million citizens, this urban hell is situated along the east coast of post-apocalyptic North America, with the irradiated wasteland that is the Cursed Earth to the west. Unemployment is rife, boredom universal an
violent crime is rampant. Tensions rest on a knife-edge and only the zero-tolerance Judges can stop total anarchy. Toughest of them all is JUDGE DREDD — he is the Law!

The Cube, the 27th century. This vast city floating in the depths of space was once a monitoring station, but has been refitted by the Earth-led Consociation as a solution to a universal housing problem. It’s now home to every kind of undesirable and wanted criminal. That’s where SKIP TRACER Nolan Blake comes in, a former soldier turned psi-tracker. Now, Blake and his infant daughter have been captured…

Gun-sharks Finnigan SINISTER and Ramone DEXTER were the best hitmen money could buy in the future city of Downlode. Having whacked Holy Moses Tanenbaum, a ganglord from an alternate dimension, they found killing him reset the continuum, meaning no one knew who they were. But now a rogue A.I. is at large, which took control of Sinister, forcing Dex to kill him. But Sinister has been resurrected, and Dex, Billi and Carrie are on the run…

Three episodes, one complete, self-contained story — a condensed hit of super-charged Thrill-power beamed to you directly from the Nerve Centre! London, 2021, and Adelphi is an Oracle, capable of communicating with the gods. Assisted by her
magical snake tattoo and guardian spirit Erwin, she keeps tabs on the the ancient deities should someone make the mistake of trying to bring them back…

The Greater Nordland Republic. While the Norts are currently engaged in a galaxy-wide war with the Southers, it falls to military officers such as Kapiten-Inspector Atalia JAEGIR of the Nordland State Security Police to investigate war criminals amongst her own ranks. She’s also suffering from the Strigoi curse, a fault in the Nort DNA. Now, after having been tortured by Southers, Jaegir’s determined to wipe out the enemy… 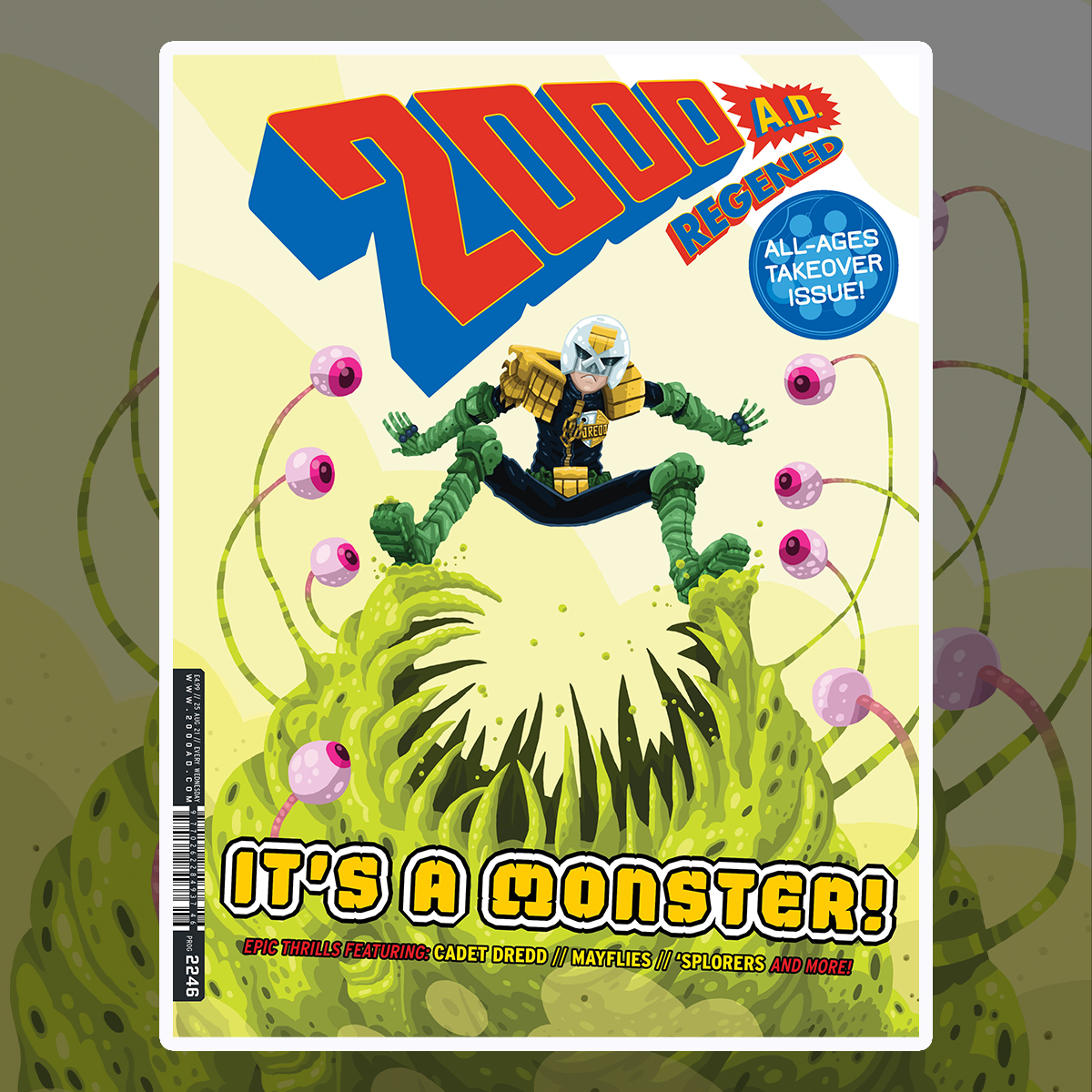 Welcome to the third Regened takeover of 2021 as once again Joko-Jargo’s Uncle Tharg hands him the editorial reins to produce a bumper 48-page issue of 2000 AD containing a bunch of zarjaz complete stories.

Inside you’ll find Cadet Dredd going undercover to tackle a gang of juvenile delinquents in The Block With No Name by Liam Johnson and Duane Redhead; those G.I. clones on the run the Mayflies are back and looking for safe passage across the warzone in The Way Forward by Mike Carroll and Simon Coleby; we catch up with former scrawler turned skysurfer Chopper,
courtesy of David Barnett and Nick Roche, in a tale set just after he comes out of the iso-cubes for the events in Unamerican Graffiti (published four decades ago this very year!); Gordon Rennie, Emma Beeby and Neil Googe bring us the pilot episode of ‘Splorers, a family adventure of the transdimensional kind; and there’s a Future Shock from Karl Stock and Steve Roberts,
the latter returning to comics after years working on such Cbeebies shows as Twirlywoos, Dipdap and The Adventures of Abney & Teal.

All in all, plenty to get your teeth into, Earthlets — so engage imagination-receptors, immerse yourselves, and enjoy

2000 AD Prog 2246 is out now from all good newsagents and comic book stores, plus digitally from our webshop and apps! Don’t forget that if you buy an issue of 2000 AD in the first week of its release then postage in the UK is free!

CADET DREDD // The Block With No Name!

Mega-City One, 2076 AD. Home to over 800 million citizens, this urban hell is situated along the east coast of post-apocalyptic
North America. On one side is the polluted Black Atlantic, and to the west is the blasted radlands of the Cursed Earth. Overcrowding in the metropolis is rife, unemployment is at ninety per cent, boredom is universal and crime is rampant. Only the Judges — a zero-tolerance police force empowered to dispense instant justice — can stop total anarchy. CADET JOE DREDD — together with his clone-brother Rico — is a rising star in Justice Department, and will one day be its finest officer. Make no mistake, he is the Law!

Nu Earth is just one planet among many caught up in a galactic war between the Norts and the Southers. Strategically vital, both sides are desperate to secure it but use of chemical weapons during the conflict has rendered the atmosphere poisonous. Now, soldiers must wear special environment suits to venture onto its surface. So the Southers created the Genetic Infantrymen, bred to be immune to the planet’s lethal cocktail of pollutants. But the gene-engineers are always looking to improve the next generation of G.I.s, giving them specialised skills and abilities — and a squad of young clones have gone AWOL, escaping from a Nort attack…

Once upon a time there were three twentysomething geeks — Simon, Rufus and Clive — who shared what looked like an ordinary semi-detached on a regular suburban street. But Clive had fitted the house with a transdimensional drive that enabled it to cross time and space, although it malfunctioned and they spent years bouncing between worlds. Joined by sceptical new housemate Sam, their travels finally came to an end when they returned to Earth and became responsible adults — Rufus entered politics, Clive became a CEO, and Simon and Sam got together as a couple, eventually having kids. But the adventures didn’t stop there…

Mega-City One, 2103 AD. Marlon Shakespeare was just an ordinary juve in the vast twenty-second century metropolis, and like
most of his generation had little to no prospects, expecting a future of unemployment and boredom. His parents have already
embraced the meaninglessness of life in the Big Meg, and spend their days heading eggs into a bucket or washing up. But Marlon was determined to make a name for himself, and under the alias CHOPPER, became a famous scrawler, spraying his tag in the most audacious of places. He was eventually arrested by Judge Dredd and served an iso-cube sentence, but he’s now out…

Out in the vast reaches of the universe, there are an infinite number of stories waiting to be told. These cautionary tales pass from traveller to traveller in the spaceports and around campfires on distant planets, acquiring the status of legend, their shocking ends a salutory lesson in hubris. Anything is possible in these twisted trips into the galaxy’s dark side. Abandon your preconceptions, and expect the unexpected. At some point in the future on Earth, the level of waste will create the Great Debris Plain, a vast landscape of garbage, where scavengers called Scrapers trawl the rubbish mountains in search of valuable treasure..